Human Rights of the Workers from an Islamic Perspective

Pay The Worker Their Wages Before the Sweat of their Brow Has Dried: A Hadees of the Holy Prophet to Celebrate International Workers' Day

2.    Every religion of the world advocates the rights of  employees.

3.    Allah, the Most Gracious, does not like any kind of injustice meted out to His creation

4.    Human Rights of the Workers Comes under the Islamic concept of Huquq ul Ibad, the rights of all the creations of God.

Abuse of the human rights of workers, labourers and the sacking of employees has become a new normal in this New 21st Century world. In this era of a ravaging pandemic, Covid-19 has witnessed many workers, labourers and employees treated inhumanley and with disdain. The employers, it seems, seldom bother about the welfare of their employees that have been with them in their bad and good times.

Various international, national and private agencies are at work to defend the human rights of the workers but nothing seems to be working in the face of ruthless employers abuse of the helpless workers, at least for now. Employees and employers relationship should be based on friendship and kinship but the employers and their management team are concerned with growing profits of the establishment. That is all. Even the struggles of the workers' unions do not look to be of any use when it comes to the formation of a formidable trustworthy relationship with the management.

This gruesome situation should not be blamed on the current epidemic as even after lots of rules and regulations formulated at the highest world levels, employees have always been at the receiving end.

Every religion advocates the rights of employees.  It commands its followers to be sympathetic with their employees. Being honest with the employees' necessities is in employers favour in the long run. And in Islamic terminology, it does come under the wings of Huquq ul Ibad, that Allah loves the most. And denial of Huquq ul Ibad is a crime that will not be forgiven by Allah as it has to be forgiven by the person it has been committed against.

Rather than taking the Straight Path, a human being takes the path of sin for the momentary happiness of this world, which everyone knows is temporary. The following two Ayaat say that Allah has created all of us and has distributed us in different social structures (employees and employers) to test our righteous ways. We, therefore, should not take pride in being an employer or rich and abuse the human rights of our fellow human being who are working under us.

O mankind, indeed We have created you from male and female and made you peoples and tribes that you may know one another. Indeed, the most noble of you in the sight of Allah is the most righteous of you. Indeed, Allah is Knowing and Acquainted. (Surah Al-Hujurat - 13 ) Sahih International

“Do they distribute the mercy of your Lord? It is We who have apportioned among them their livelihood in the life of this world and have raised some of them above others in degrees (of rank) that they may make use of one another for service. But the mercy of your Lord is better than whatever they accumulate.” (Az-Zukhruf 43:32)

Human Rights of the Workers Comes under Huquq ul Ibad

Islam is a universal religion advocating Huquq ul Ibad or human rights, indeed the rights of all creations of God. Islam teaches equality among human being without any exception of rich and poor, white and black and Arabi and Ajami. It is in this context that Islam calls the employer and the employees brothers and equals. Islam asks both of them to be fair and honest towards their duties. Allah, the Most Gracious, does not like any kind of injustice meted out to His creation and all of His followers are bound to do their duties with all honesty and trust. The wages being paid to the workers are not enough for they being like your brothers and sisters you have to take care of them in every matter of their good life. Keep in mind the narration by Al-Ma'rur bin Suwaid and take the path shown by Islam:

I saw Abu Dhar Al-Ghifari wearing a cloak, and his slave, too, was wearing a cloak. We asked him about that (i.e. how both were wearing similar cloaks). He replied, "Once I abused a man and he complained of me to the Prophet (ﷺ). The Prophet (ﷺ) asked me, 'Did you abuse him by slighting his mother?' He added, 'Your slaves are your brethren upon whom Allah has given you authority. So, if one has one's brethren under one's control, one should feed them with the like of what one eats and clothe them with the like of what one wears. You should not overburden them with what they cannot bear, and if you do so, help them (in their hard job).

Prophet Muhammad Pbuh’s life has been a testimony of his nobleness, affection and cares with all those who served him as an employee or as a companion. According to the narration of Anas ibn Malik, who served the Apostle of God for ten long years:

Following Hadees narrated by Abu Huraira (RA) says that ‘One who employs a labourer and takes full work from him but does not pay him for his labour’ will see Prophet Muhammad (SAW) as his opponent on the Day of Judgement:

The Prophet Muhammad (SAW) said, "Allah said, 'I will be an opponent to three types of people on the Day of Resurrection: 1. One who makes a covenant in My Name, but proves treacherous; 2. One who sells a free person and eats his price; and 3. One who employs a labourer and takes full work from him but does not pay him for his labour.' "

At one instance Islam teaches to pay the workers their wages on time, as Abdullah ibn Umar reported:

The Messenger of Allah, peace and blessings be upon him, said, “Pay the worker his wages before his sweat has dried.” Sunan Ibn Mājah 2443

O ye who believe! stand out firmly for justice, as witnesses to Allah…. (An-Nisa-135) - Yusuf Ali 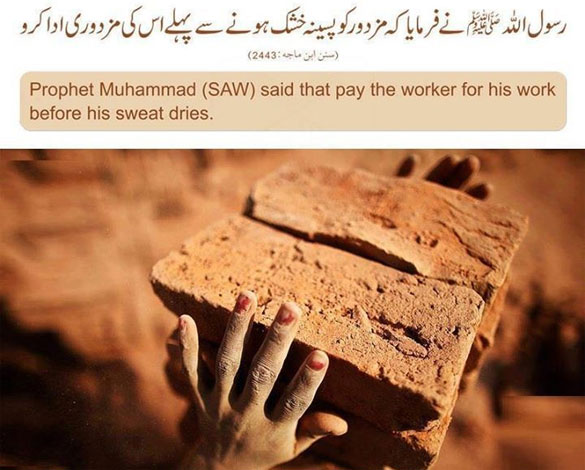 Islam is a religion that opens the secrets of human life. The human being is sent on the earth to live a life in all its colours. Islam asks its followers to worship Allah but it has never asked to devote himself to the worship of Allah so much so that he forgets that he has a family, a society to whom he is responsible. The worldly responsibilities can not be fulfilled to take to a corner and worship. Allah has rewarded His creation with the reward of worship even in working for the benefit of his family and social life. The human being can not fulfil his obligations of a social life without working and earning a livelihood.

Working for livelihood is considered to be a work of worship in Islam.  The Holy Quran addresses the human being and commands:

“ Then when the prayer is ended, you may disperse through the land and seek the Bounty of Allah (by working) and remember Allah much, that you may be successful” (Quran: Surah 62, Verse 10)

Consider what  Imam Al-Ghazali mentioned in his book Ihyaa’ `Ulum Ad-Deen (Revival of the Religious Sciences):

Jesus (peace and blessings be upon him) once saw a man who had completely devoted himself to worship. When he asked him how he got his daily bread, the man replied that his brother, who worked, provided him with food. Jesus then told him, “That brother of yours is more religious than you are” (The Book of Provision, Chapter 1). Al-Ghazali also mentions the Prophet’s Companion `Umar ibn Al-Khattab, who used to stress this point further by telling people, “Never should anyone of you think that Dua’ (supplication) for sustenance without work will avail him, for heaven never rains gold nor silver” (The Book of Provision, Chapter 1).

Islamic Working Ethics of the Employees

There are many responsibilities of an employer but it is not that Islam has not decided the ethics of work for the employees. It surely takes two to clap hence for better result and brotherly atmosphere in the workplace and growth in the output of the work, employees also have their duties to perform with all their honesty and hard labour.

Allah, the All-Knower, says in the Holy Quran to perform our duties with responsibility and be honest to the employer:

“ Do Deeds! Allah Will See Your Deeds And (So Will) His Messenger And The Believers. And You Will Be Brought Back To The “All-Knower” Of Unseen And The Seen. Then He Will Inform What You Used To Do” (Quran: Surah 9: Verse 105)

In the following Ahadees, workers are informed of their working ethics:

“ Best earning is what is earned by the labour of hand with sincerity” ( Ahmed, Hadith No. 83 93)

“ When an employee looks to the welfare of his employerand worship Allah, he has two rewards for him” (Muslim: book 15, chapter 11, No.4097)

"On World Labour Day” human being must acknowledge that there is dignity in working. The working class is dignified in the eyes of Islam. Prophet Muhammad (SAW) and all his Sahaba did their works themselves even if they could have had slaves (workers). Miqdaam bin M’adi Karab narrates that Prophet Muhammad (SAW) said:

“The cleanest food is that which has been earned by the labour of one’s hand, In fact, the Prophet Daud (David) used to work with his hands for his living.” ~ Bukhari

Let the world know that the relationship of an employer and his employees is that of kinship so the human values of this relationship must be maintained at all costs. This brings us to understand that we as an employer or as an employee do not have to distinguish people among ourselves based on religion, race, colour, language or any other social things.

May Allah, the Most Merciful bless His creation with utmost happiness of working together for the advancement of the world He has created. Ameen