‘Third Of Fighters in Yemen are Children’ 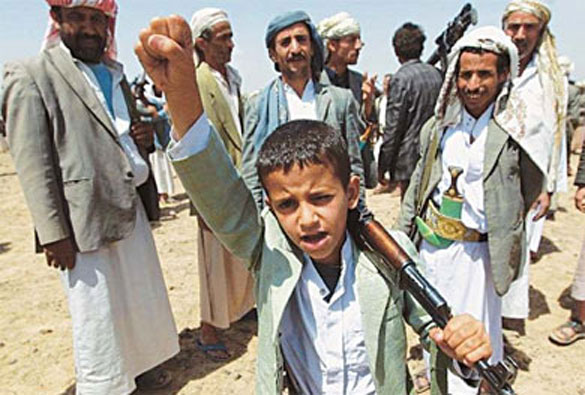 A Yemeni boy holds a gun during a tribal gathering in the Bani al-Harith area, north of Sana’a.—AFP

Children make up a third of fighters in the armed groups in conflict-wracked Yemen, a UN official said on Thursday, also warning that malnutrition levels in the country were set to explode.

“We are seeing children in battle, at checkpoints and unfortunately among [those] killed and injured,” Julien Harneis, Unicef’s representative in Yemen, told AFP during a stopover in Geneva.

Staff of the United Nations children’s agency and its partners had estimated that around 30 per cent of fighters in the armed groups were minors, he said.

In Yemen’s tribal culture, it is common for boys to take up arms at a young age — something that is having dire consequences amid the spiralling conflict.

“You can say that up to a third of fighters in the armed groups in Yemen are children,” Harneis said.

President Abedrabbo Mansour Hadi fled Aden for Saudi Arabia during the Houthi advance and the city has since seen heavy clashes between pro- and anti-government forces.

Even when they are not on the front lines in the conflict, children are particularly vulnerable, Harneis said.

Unicef has confirmed that 77 children have been killed and 44 others injured since March 26, he said, adding though that the true toll was likely far higher.

“There are children dying in bombings in the north nd by very intense battles in Aden and Daleh. All of the parties to the conflict are to blame,” he said.

In addition to the violence, already high malnutrition levels in Yemen are expected to soar.

“We are going to see a spike in malnutrition in coming weeks. Unfortunately, that is something we are sure of,” Harneis said.

“Difficulties in accessing water, rising prices for supplies, the difficulty to move around the country ... All of this combined with cuts in state-run services [means] we will again see ... hikes in malnutrition,” he warned.

Lacking access to food could be catastrophic in Yemen, where chronic malnutrition levels last year already stood at a staggering 48 per cent — among the highest in the world, Harneis said.

The conflict will also lead to a decline in the number of children attending school in a country where one million school-aged children were already not receiving an education, he said.

In light of the desperate situation, Unicef is hoping to send medical supplies, drinking water and hygiene products to Sana’a, Harneis said.

If the UN agency manages to get the plane into the country, it would mark the first flight to Sana’a carrying aid supplies since the latest round of hostilities began.

Harneis said he was in Geneva to tell diplomats what he and his colleagues are seeing on the ground, “in the hope the states will use this information to reduce the impact of the conflict on children”.