Epitome of Hindu-Muslim Unity: How Assamese Muslim Have Contributed To the Composite Heritage of Assam

Marriages in Assamese Muslim society are mainly about Islamic customs but with some traditions common among Assamese Hindus closely entwined.

Arranged marriages comprise two main ceremonies – Angothi Pindhuwa or Juroon (ring ceremony or Mangni) followed by the Nikah. The groom’s family visits the bride’s place to formally ask for her hand. After the families of both the sides agree on the marriage, a date is fixed for the ring ceremony, which usually takes place a few months before the wedding.

On that day, relatives of the groom including his parents go the would-be bride’s home and gift a gold ring, clothes, ornaments and sweets. The groom’s party is treated to a sumptuous meal. Nowadays, in many cases, the groom also accompanies his parents. The Juroon marks the beginning of the wedding festivities.

Then comes the Nikah. But before that there are a couple of short ceremonies. One is a Milad Sharif in which a Maulvi recites some verses from the Quran and pray for the smooth conduct to the marriage. A feast follows and the usual food items offered at these gatherings are pulao, meat curry and meat roasts.

Murot Tel Diya is the other ritual before the Nikah. This is a practice which is influenced by Maah Halodhi Diya of Assamese Hindu marriages. Oil is applied on the hair of the bride and a paste of lentils and turmeric on her body and she is given a ceremonial bath. The groom also goes through the same process. This practice is, however, not prevalent among all Muslims of Assam. Ballads called Biya Naam are also sung in many marriages, particularly in rural areas. 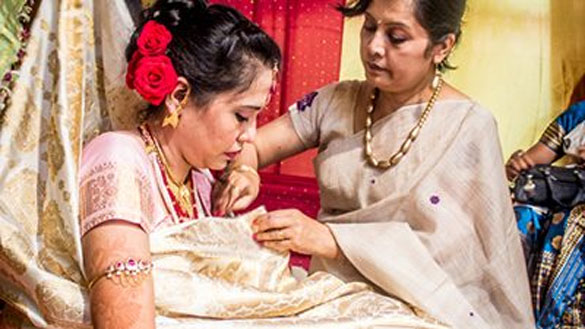 It is very interesting to note that the brides wear resplendent Mekhela chadors both in the nikaah as well as the reception ceremonies while the groom dons a Sherwani and a Pagri (turban) on the day of the Nikah and usually a western suit on the day of the reception. This dress code can be attributed to the fact that when the Muslims first came to Assam, they married local Assamese women. And so, the grooms now wear the Sherwani and turban, perhaps carrying on the legacy of their forefathers who came from outside and made Assam their homes. And the brides kept on the Assamese tradition and wear mekhela chadors and not Lehengas and Ghagras as are donned by girls of the community in other parts of the country. The brides also wear traditional Assamese jewellery.

Also on the day of the Nikah, a groom is accompanied by a Tamuli or a best man who has some key tasks to perform. A friend of the groom who is of marriageable age is usually chosen as a Tamuli. The term tamuli is derived from the Assamese word Tamul (betel nut). The Tamuli helps the groom in offering Tamul to guests, which is a tradition in Assamese society. In Assamese Hindu marriages, the Tamuli is known as Dora Dhora. There is no such role for a bridesmaid.

The groom cannot move inside immediately after he arrives at the bride’s place: he has to fulfil a demand. This is called Dang Dhora and it demonstrates that the bride’s family won’t allow the groom to take the girl that easily. The groom is allowed to proceed only after he agrees to a monetary demand made by some youths from the bride’s side and pays them the amount they ask for. The Tamuli is the person responsible for these negotiations. The elderly people from the bride’s side welcome the groom party.

Tea and refreshments are served to the groom party before the Nikah ceremony commences.

Kids who are relatives of the bride then take part in a short ritual called Aator Diya. They garland the groom as well as the Tamuli, put Itr on their foreheads and offer milk and sweets, mostly Rosogullas to the duo. The kids in turn are given gifts and even cash sometimes.

The main Nikah ceremony begins with both the groom and the bride’s sides deputing a senior member of the family or the society to conduct the proceedings. They are called the Wakeels and they brief the people attending the function about the two families. One of the notable features during their conversation is the exchange of Tamul Paan (betel nut and betel leaves) in botas or small rounded brass trays with stand. Tamul Paan is a key feature of the Assamese socio-cultural life. The Wakeels then choose a couple of witnesses to help them. These designated people go the bride and the groom and seek their consent for the marriage. Both the bride and the groom reply to them saying Kobul Korisu or Qubool Hai (I accept). The maulvi then say some prayers and the Nikah is completed. The Nikah Laddoo is distributed among the people along with a packet of assorted dry fruits and some sweets.

Another integral thing of a Muslim marriage is deciding on an amount to be paid by the groom to the bride as a gift. This Mehr amount should be given to the wife as soon as possible. The amount decided is announced by the ukils during the nikaah.

There is also a practice of showing to the guests the ornaments and the clothes gifted by both the sides to the bride. Women display these items in big trays.

Then is the time for food, which is a lavish affair. The bride joins the groom and they are served separately with some friends a few relatives. The rest of the groom’s party have food together. I have written in details about the dishes served in weddings in the chapter on food (The Assamese Muslim Kitchen).

There is also a cake cutting ceremony by both the bride and the groom. Here too, girls from the bride’s side quiz the groom about how much he knows about his wife. For every incorrect answer he is ’fined’ and ends up paying a hefty amount to the girls.

Before the bride leaves for her new home, there is another small ritual called tamul luwa in which her family and relatives bless the couple and present them gifts and the newly-weds in turn give them tamul paan or mitha paan. This ceremony later takes place at the groom’s place after their return when all his family members and relatives are introduced to the bride. After the new couple enter the house, kids welcome them by washing their feet. The bride throws coins in the air for the kids to collect. A vessel full of rice is kept and in it are hidden a gold and a silver ring. The bride is expected to find the golden ring which will prove that she is extremely lucky for the house.

There is another ceremony called the Aath Mongola. On the eight day of the marriage, the couple is invited to the bride’s house and a feast is organised. Gifts are also exchanged.

In a few marriages, wedding bands are engaged. In his book A Study of the Folk Culture of the Goalpara Region of Assam, Birendranath Datta mentions that marriage songs are invariably sung in a Muslim wedding. Coupled with the dhol-shanai bands, these songs help to make the marriage very much of a musical affair. In Muslim marriages, there is an addition – the practice of dancing, especially at the bride’s house.