Near Srinagar’s Hari Parbat, Both Hindus and Muslims Mourn a City Changed Forever 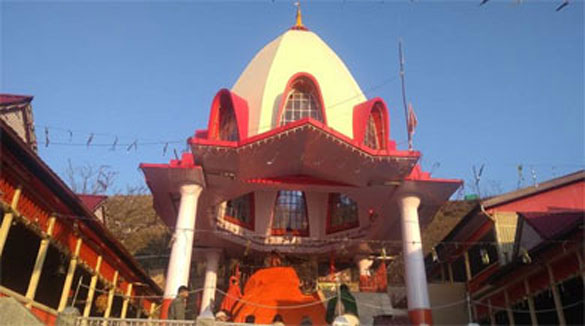 Overlooking Srinagar is Hari Parbat, a hill home to a fort, a temple, a Gurdwara and a Dargah. The temple here is dedicated to Jagdamba Sharika Bhagwati, considered the presiding deity of Srinagar.

Rolled-up concertina wires lie on the long flight of stairs leading up to the temple. A CRPF jaw an proffers a register, where one must note down their name and phone number before entering the temple. Inside, on the afternoon of February 16, around 10-15 people are busy with Kirtan. It is a few days before Shivratri, and the temple is gearing up for the festival.

And today? “Oh, things are better. You see this gathering in the temple. We aren’t fearful of living our normal lives anymore. Over the years, a few Pandits have come back, some because of the government’s rehabilitation package, some because the situation improved,” says Koul.

“You see this Tika on Koulji’s head? He has just come from Old Town (considered among the more disturbed areas of the city) sporting this. No one bothered him. There’s no hostility. Times have changed dramatically from the 90s, though it’s still not a fairy tale,” Sushil Kumar, a government employee, joins in.

Kumar came back to Kashmir last year under the rehabilitation package, Koul never left. They both live in Barbarshah area of Srinagar.

Not A Fairy Tale Because?

“See, a minority is always a minority. I lived in Uttar Pradesh and NCR for years. Muslims are a minority there, don’t they feel insecure? We Pandits will always feel that here. Also, the horrors of the 90s can’t be forgotten,” says Kumar.

A CRPF jawan passes by, listening intently, but not interrupting the conversation.

“Oh, the things I could tell you about the 90s!” says Koul. “Till late 1980s, everyone lived in harmony. And then suddenly, we had little children on the streets chanting slogans of a Muslim empire. I have heard with my own ears, announcements from mosques saying Kashmir would have Muslim rule. People fled leaving behind homes, properties worth crores. Then, as the Hindus left, I watched Kashmir change. You must have spotted beef shops on your way here, but earlier, beef was never sold openly. There is a mosque every few kilometers now. This temple, and the others you see open, survived because of the Armed Forces. We got used to praying in the shadow of guns.”

Then his voice softens. “But you know what, there is another, undeniable truth — the Hindus who stayed back survived because of their Muslim neighbours. When a Hindu died, Muslims made all efforts to arrange his funeral, often at personal risk.”

Kumar breaks in: “Also, if you notice, there are many temples locked up today because there aren’t enough Hindus to pray in them. But they lie undisturbed. They were never vandalised. Muslims living around made sure the evil forces never got to them. Even today, Muslim families have keys to temples. They have them cleaned and swept, they maintain them.”

Kumar smiles. “Individually, Kashmiri Muslims are lovely people. They will lay down their life for you. But in a mob, something happens to them. They start behaving and even thinking differently. They get so paranoid. Now that Article 370 is gone, they think Hindus from outside will occupy Kashmir and turn it into Syria. An unnatural fear has been created in their minds, for years.”

“Mob mentality, I guess,” says Koul. “But I don’t think the worst days will ever come back. That unmaad (frenzy) is gone. The Kashmiri Musalman is at heart a gentleman. Even when a cock dies, they give it a proper burial.”

The CRPF jawan is back. He stands in a corner, listening, but not joining in.

“The Kashmiri blood is gentle. We Hindus too don’t want revenge. We just want to get on with our lives,” says Kumar. “The rest of India tries to oversimplify our story depending on the narrative they want to sell. Few actually understand Kashmiris.”

There is a general murmur of agreement about the innate excellence of Kashmiris, Hindu or Musalman.

“People think Kashmir is the most dangerous place in India,” the CRPF Jawan finally joins in. “But for us, a Chhattisgarh is far more dangerous. I am originally from Meerut and have been posted in Kashmir several times since 1994. Here, the militants number in hundreds, whereas in places like Chhattisgarh, we are surrounded by thousands of Maoists.”

Kumar turns to him eagerly. What does he think about Kashmiris in general, compared with other Indians? “We don’t really interact much with people. We stay in our cantonments, do our jobs,” the Jawan says.

On the foothills of Hari Parbat lives Haji Hamid. “My family has lived near this temple for generations. We would wake up to the sound of mantras and temple bells. For some years, they had been completely silenced. It is good to hear them again,” says Hamid.

“We can’t whitewash what happened in the 90s — the threats, the killings. Militancy, politics, all contributed to the flight of the Hindus. Also, a fear psychosis was created in their minds by those with vested interests. But the ordinary Muslim doesn’t wish the Hindus ill.”

Haji then recites a mantra to Maa Sharika, in Sanskrit and in Kashmiri. “If I had any hatred for Hindus, would I remember the mantra?”

Are there temples around being maintained by Muslims? “Of course. We can go to one right away.”

The small temple is located near the Khwaja Makhdoom Sahib Dargah, on the southern slope of Hari Parbat. Some enquiries are made in Kashmiri, and a man appears with a set of keys. Inside, the temple is clean and well-maintained. “There’s no electricity, but I can show you around with my torch,” says the man who unlocked the temple. On a wall are stuck coins — wishes made by devotees. “I open the door for anyone who comes to ask, tourists or local Hindus. I am holding this temple in trust. It’s more important than my own home for me,” he adds.

Mohammed Ramzan, a travel operator who takes tourists to the Makhdoom dargaah and the Sharika temple, joins in: “When the Hindus fled, they were exiled. But we lost our home too, you know. Kashmir has never been the same. We now live in a city we don’t recognise, where not one moment is peaceful, where the shadow of fear accompanies you everywhere, whether you are a Hindu or a Muslim.” He points to the dargah and the temple. “May either of the Gods return the peaceful, secular Srinagar we all knew. May we all get back our home.”

Original Headline: At Srinagar’s Sharika Devi temple: ‘Pandits were driven out, but those who stayed, survived thanks to Muslims’