Muslims and Christians Can Learn From One Another 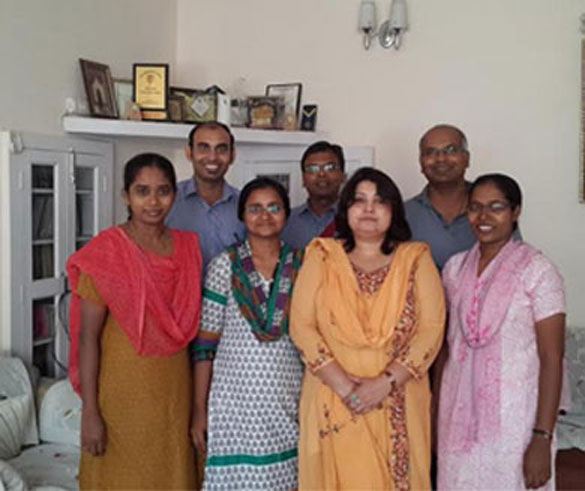 A group of first year theology students from Vidyajyoti college of Theology visited Ms. Sheeba Aslam Fehmi to listen to her views on Islam, Muslims and Women in Islam. Ms Fehmi is one of the Islamic Feminist Writers & Journalist. She has edited political monthly Headline Plus and Mission and has been the managing editor of a daily newspaper and a magazine. She has also written in major dailies and magazines. She writes regularly on gender-just understandings of Islam.

The conversation started on familiar notes. The students asked Fehmi to explain to them the central beliefs of Islam. Fehmi explained that the fundamental beliefs of Islam as Tawheed- oneness of God and the finality of the Prophethood of Muhammad.  She further said that Islam teaches “living a balanced life”. She added that “the best of things cannot be overdone.” Both extremities: austerity and extravagance should be avoided. She gave an example: “one cannot fast on the day of  Eid.  Fasting is good. But one should not over do it. Keep Fast, when it is asked …do feast when it is due”.  This idea of balance has its roots in the Qur’an and the traditions of the prophet. In her opinion, the Qur’an gives every instruction needed for a fulfilled life on earth. There is no ‘perhaps’ … ‘may be’ … in Islam, she said. Clarity is the hall mark of Islam, she told her visitors.

As a student-scholar of Muslim-Christian relations (hence forth M-C relations), I have heard these explanations often. My attitude is that Muslims should explain as they understand and live their faith. I have learnt to listen to them with much respect. I think one of the key issues in M-C relations is listening patiently with full respect without getting tempted to bring about a critical observation. Critical questions need to be raised when there is relationship established. I follow a standard instruction that I learnt from Fr Paul Jackson. “Ask questions … do not argue”. Asking questions will confirm your open attitude to learn from a Muslim. Any slight trace of argument will confirm that you have come not to listen but to argue and find fault with Muslims. I have gently instructed the students before visit. I should say happily they asked a number of interesting questions on the fundamentals of Islam.

On asked what Christians could learn from Muslims, she said that Christians can learn from the idea of equality and brotherhood-sisterhood from Muslims. Though I personally felt their commitment to prayer and fasting are pointers of challenge for their Christian neighbours. However, in open ended conversations, one needs to ask some hard questions.  How does one account for the sectarian violence that engulfs West Asia including Pakistan. In Pakistan Shia and Ahmedi mosques are regularly bombed by extremists. Fehmi replied, “Though the violence is committed in the garb of sectarian feud but its purely a struggle for power. Particularly in the Middle East its due to the abundance of natural resources and the question that who owns its booty. Its a war for control on Petroleum. There are many other Muslim countries like Malaysia and Turkey that inhabit all sects of Islam but you do not see any violence in the name of Sect there”.

Fehmi was asked: what Muslims could learn from Christians? She unhesitatingly stressed that Muslims should learn from Christians that art of selfless service. The service institution in education, health and social sectors rendered great service to nation building, she said, “personally I feel indebted to the Christian ethos for establishing the institutions of Hospital, Nursing, Caring. This is one of the biggest contribution of Christianity to the world and I bow my head in gratitude for this”.  However, as a feminist thinker, she found it strange that the Catholic Church do not allow ‘divorce’ of estranged couples. One sister student who has worked for long in the diocesan centre for counselling women in distress due marital conflicts explained in greater detail the teaching of the Catholic Church on marriage and a number of ways in which marital conflicts are handled in the Church. It is important to clarify issues. I listen with great joy how someone who knows the teachings of the Church well and have applied that in concrete situations are enhanced to present the teaching and practice of the Church on critical issues clearly and calmly. Knowledge and the wisdom that is gathered from applying the knowledge certainly equip one with the facility to help others to see the issues from a new angle.

One student asked: what aspect of Islam is misunderstood by Muslims themselves? Fehmi said Islam gives equal importance to both Worship (Ibadat) and Way of life, the way interacts with the other (Muamlaat).  One could say, Ibadat is how one connects with God and Muamlaat is how one connects with fellow human beings. Fehmi complained that her fellow Muslims give so much emphasis on Ibadat but forget about Muamlaat. She believes if the community lacks in Muamlaat that is the ideal, humane behaviour with fellow human beings, then Ibadat will remain futile.

She further said that Muslims often forget the value attached to the Prophet’s behaviour and teachings (Sunnah), but simply imitate his actions bereft of the value that was the soul behind that particular action. As an example, she said the Prophet had dates and some water to break his fast. Dates were the most common and easily available food to him in the Arabian deserts. Now a Muslim sitting in Japan or Canada would insist upon breaking fast with Arabian dates only forgetting the Prophet’s idea of living within available means and not creating fuss about food at the time of breaking the fast. Some even insist that dates should be Arabian Dates only! Is it not too much! she exclaimed.

Another interesting question was: what aspects of Islam the way Muslim preachers are difficult to come to terms with? She noted that how “life-after” is preached in orthodox Muslim discourses unsettle her. Many Islamic preachers emphasize the notion of sexual pleasure with many heavenly maidens and wine to one’s heart content available in heaven. She asked if wine and sexual pleasure with many women is despicable in this world, how come, that becomes noble in the life-after?  Secondly, what are the rewards reserved for women in Jannah (paradise)? Finally, she gave emphasis to approach the authentic texts of Islam and also keep in mind the critique of Muslim Clergy that Islamic-Feminists are doing world over, and find your balance, she told the students.