By Ujaan Ghosh and Amrita Chowdhury

On Janmashtami, as the Kashi-Mathura temple debate rages after the Ayodhya bhoomi pujan, it is important to focus not just on the binary of victory and defeat, but also on coexistence. Little is known about how Islamic rulers patronised coexistence through both literary and administrative means. 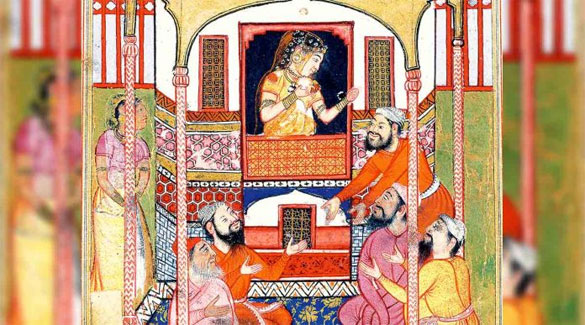 A folio from Razmnama, a Persian translation of the Hindu epic Mahabharata carried out during Mughal emperor Akbar’s reign | Photo: Wikimedia Commons

The Hussain Shahi (1493-1538) dynasty of Bengal were great patrons of Krishna’s bhakti literature, and the little-known financiers of possibly the first Bangla Mahabharata. Indeed, the Bangla epic came to be composed soon after their chief general Paragal Khan’s conquest of Chittagong. The newly victorious Paragal Khan became interested in learning the epic and requested Kabindra Parameshwara to compose a suitable rendition in Bangla. The text, taking great cognisance of this endowment, begins with lengthy praise of the peaceful and benedictory rule of the Hussain Shahis in Bengal. The sultan is not only addressed as “a valiant warrior” and “a famed ruler”, but also called the Ishwara of Gauda and compared to Krishna (Sen 1911, p. 202) 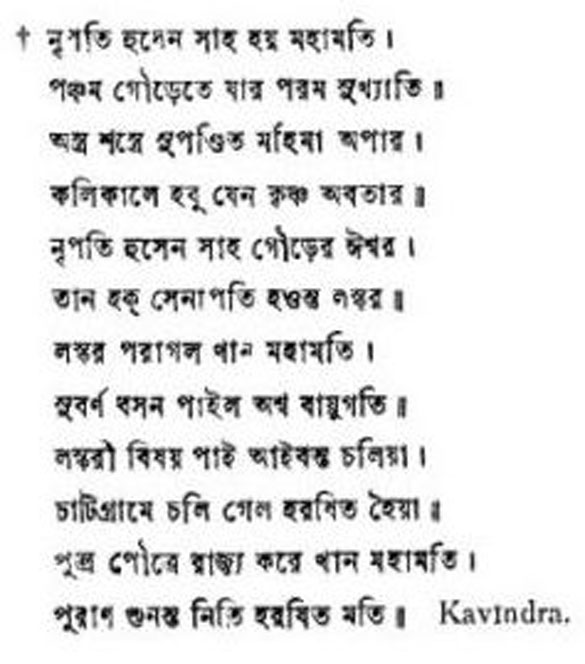 The text was most likely completed during the reign of Chutti Khan (‘choto’ meaning junior), who much like his father continued to be a great patron. And, Srikarna Nandi was assigned as the poet. However, some scholars say that Paragal Khan and Chutti Khan’s Mahabharatas were in fact two distinct accounts. Nandi likened the prosperity of the Hussain Shahi rule with Rama’s kingdom, and praised him for upholding the Hindu codes of Sama-Dana-Danda-Bheda. 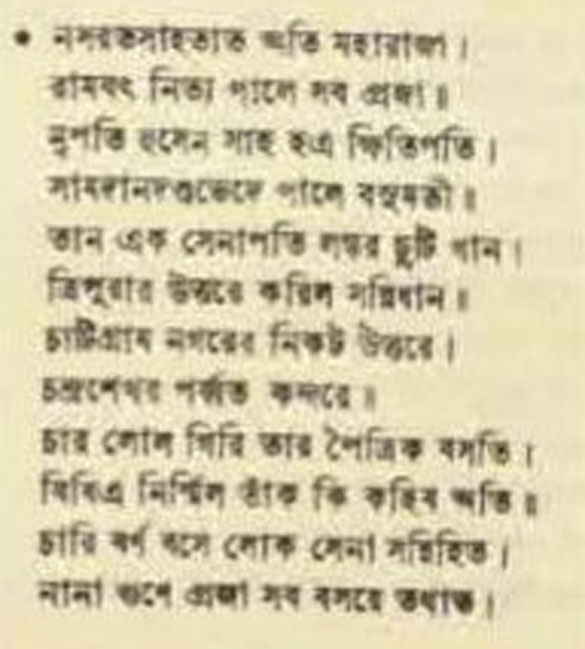 Recitations of the epic at the Shahi courts were also encouraged, and the nobles were active listeners. Indeed, Nandi noted that Chutti Khan had been inspired to sponsor the composition of the tale after intently listening to the Sanskrit recitation of the abridged Jaimini Mahabharata — Jaiminibharata — in his court. Historian Sukumar Sen argues that these courtly recitations, which had stopped altogether after the dissolution of the Pala dynasty, were revived during this period.

Another notable feature of the time was the composition of Krishna’s biographies. Maladhar Basu, who was granted the title Gunaraj Khan by Ruknuddin Barbak Shah (who preceded Hussain Shah), composed his immensely popular Srikrishna Bijay, a Bangla rendition of the final cantos of the Srimad Bhagavatam. Throughout the text, he chooses to sign as Gunaraj Khan, as is evident from one of his introductory verses: 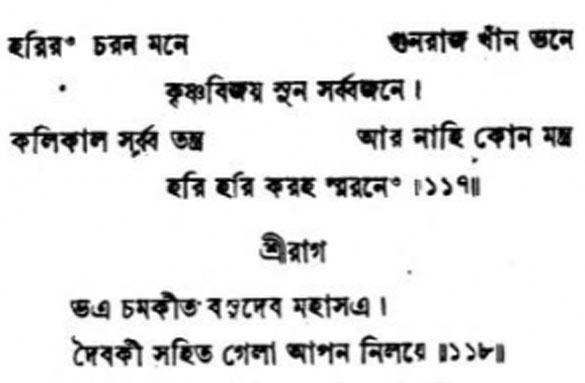 The period between 1500-1800 CE witnessed a major political shift in north India — the expansion of the Mughal empire — and with it, a resounding boom of Vaishnava devotionalism. Many scholars have elaborately demonstrated how the growth of Vaishnava bhakti in the medieval north Indian heartland frequently came at the expense of Shiva-Shakti worship (Vaudeville 1976; Pauwels 2009, 2010; Orsini and Sheikh 2014). However, our concern here is to chiefly trace how Mughal patronage benefited the medieval Vaishnava heartland.

Akbar was a patron of the Vaishnava tradition and was known for his many grants and endowments — the earliest being in 1565 to the priest of Govindadeva temple (Burchett 2019, p. 118). Akbar kept granting lands to temples till the last years of his reign. This is evident from how he “enlarged and consolidated all grants to temples and temple-servants in the Mathura region by his farmans of 4 and 19 Shahriwar 43 Ilahi year (27 August and 11 September 1598), which provided for a total grant of 1,000 bighas of land to 35 temples in Mathura, Vrindavan and their environs” (Mukherjee and Habib 1988, pp. 287-300).

It is also interesting to note, as Pika Ghosh points out to demonstrate the Hindu-Muslim syncretism of the site, “the series of five early temples (Madanmohan, Gopinath, Radha Vallabh, Jugal Kishor, and Govindadeva)… flaunt the red sandstone marked unmistakably by their immediately precedent use at Akbar’s capital at Fatehpur Sikri” (Ghosh 2002, p. 205). Further evidence suggests that “Vaishnavas belonging to different sampradayas (communities) — including Bengalis of the Chaitanya sect — who… gathered in Mathura–Brindavan, quite regularly petitioned and lobbied the imperial durbar for the settlement of grievances as well as for additional land and other material grants” (Chatterjee 2009, p. 156).

Akbar was, however, not alone in his household in his support for Vaishnavism. Hamida Banu, his mother, had particularly supported the Vallabha sampradaya. In 1581, in no uncertain terms, she ordered that “the cows of Vithaleshwar may graze wherever they are and not a single individual of the Khalisa and jagirdar should molest them or prevent them. They must allow his cows to graze and the aforesaid person should feel perfectly at ease” (Edicts from the Mughal Harem 2009, p. 4).

Jahangir not only continued Akbar’s grants but added considerably to it. He turned Todar Mal’s 1584 grant of 100 bighas into a permanent imperial grant “in favour of Srichand, Gopaldas’s successor, as sevak of the temple of Madan Mohan. That is, it was no longer resumable by jagirdars” (Mukherjee, Habib 1988, p. 288). He also financed the construction of two temples, one in Vrindavan and another in Mathura, and issued a number of grants to the influential gurus: Kamadev Acharya and sons received 24 bighas in 1612, Narayan Das and sons 12 bighas in 1612, Brindaban Das and Nanda Lal 50 bighas in 1612, Swamidas 20 bighas in 1613, and Shyam Krishan 15 bighas in 1615 (ibid.). Shahjahan, faced with a dwindling treasury, wasn’t nearly as open-handed as his predecessors when it came to temple-grants, but he nonetheless preserved the earlier ones (Ibid., p. 288).

Looking into The Past

What necessitated Islamic patronage of Vaishnav texts and sites? Was it personal proclivities? The influences of sectarian leaders (Chatterjee 2009)? Marital alliances (Burchett 2019)? Or administrative matters (Rana 2006)? There are too many reasons to be summed up here. Nonetheless, even a brief engagement with the available scholarship is bound to demonstrate the complexity and interconnectedness of the pre-modern religious history of the subcontinent.

After the Ram Mandir Bhoomi Pujan in Ayodhya on 5 August, many Right-wing public intellectuals have claimed that “rebuilding is a civilisational responsibility Indians owe to their ancestors”. This cannot be possibly more anachronistic. As one can see, it is not rebuilding where our responsibility lies, but rather in preserving our united efforts, preserving India’s multicultural and heterogenous religious histories that we often overlook due to populist, rhetorical hyperbole. In this regard, one might as well look for inspiration in this syncretic, and now routinely demonised, past.

Ujaan Ghoshand Amrita Chowdhury are graduate students of history and art history at Mcgill University and the University of Wisconsin-Madison. Views are personal.