The recent controversy surrounding the construction of Sri Krishna Mandir in Islamabad has once again highlighted the widespread bigotry and intolerance in Pakistan. The temple, the city’s first, was meant to showcase plurality. Instead, the storm and hatred against the temple has turned it into a symbol of all that is wrong with Pakistan’s treatment of its minorities. 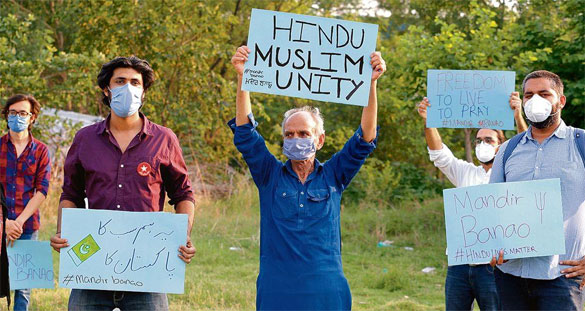 Support: Amnesty International has said halting the construction of the temple ‘is an unconscionable act of bigotry that must be reversed immediately’.

The government of former PM Nawaz Sharif had approved plans to build the temple together with a crematorium and a community hall. Apart from catering to the needs of the 3,000-odd Hindu community in Islamabad, it would also have obviated the need to travel long distances to cremate and perform last rites of those who died. The Capital Development Authority (CDA) allotted a 4-kanal plot in 2017 in Islamabad after consultations with the Ministry of Religious Affairs, Special Branch and the Islamabad administration. The Imran Khan government this year approved a grant of Rs 100 million for its construction. The ground-breaking ceremony was held on June 23, and the community started building a boundary wall with its own resources. 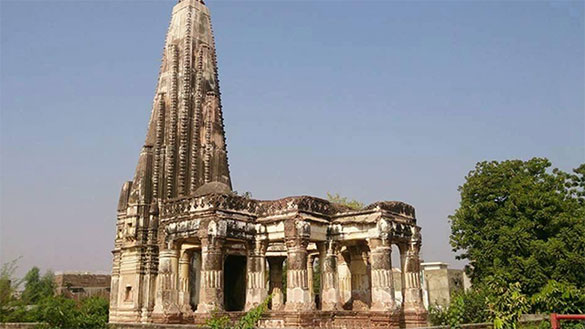 It is more than 1000 years old and was renovated in early 2007 by Punjab Chief Minister Pervaiz Elahi. The main deity is lord Jagannath who is an incarnation of lord Vishnu.

However, Muslim clerics and politicians, including an ally of Khan, Chaudhry Pervez Elahi, strongly opposed the move. A petition was filed in the Islamabad High Court against the temple. The JUI-F’s Maulana Fazlur Rahman and Lahore-based Jamia Ashrafia issued fatwas against the construction, declaring it ‘non-permissible’ under Islam. A group of influential Islamic clerics warned that there would be a ‘severe reaction’ if the temple was built.

Several videos came to light vehemently opposing the temple. One featured the half-erected boundary wall at the construction site being pulled down; another featured a four or five-year-old boy warning Imran Khan that he would hunt down and kill all Hindus if a temple was constructed; another showed a man singing a hate song addressed to ‘Hindustani dogs’, asserting that a temple would never come up in Islamabad. These and other videos were the result of persistent and large-scale indoctrination over decades that have resulted in an intolerant society. 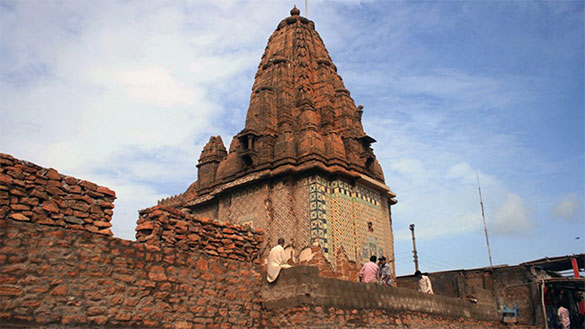 It is situated on the outskirts of ManoraCant, Pakistan, and is more than 160 years old. The main deity is Varun who is the god of the oceans and is admired for its fine architecture and beautiful craftsmanship.

The CDA halted the construction of the boundary wall on the pretext that there was no approved building plan, even though the practice was for owners to construct a boundary wall to ensure possession of their plot even as other formalities continued. The HC decided that the matter of funding of the temple was for the government to decide, and in any case, the CDA had not even approved its building plan.

The government bounced the matter to the Council of Islamic Ideology (CII), seeking advice whether state money could be used for construction. The CII referred the matter to its research wing where it is likely to remain for some time. This is the same CII that in the past had endorsed child marriage, domestic abuse, marital rape, and incitement of genocide against the ‘wrong’ kind of Muslims.

Support for the temple has come from the Pakistan Ulema Council on the grounds that the constitution and Sharia gives religious minorities the right to have their own place of worship. It held that the Hindus living in Pakistan were not residents of a conquered land, and so the argument about the rights of non-Muslims is not applicable to them.

The matter has got international traction. Amnesty International has said halting the construction of the temple ‘is an unconscionable act of bigotry that must be reversed immediately’. The US Commission on International Religious Freedom tweeted that it was very disappointing that the government seemed to be backtracking on its approval of constructing the temple.

Apart from the innate hateful attitude towards the minorities, the crux of the debate is whether or not a Hindu temple can be built in an ‘Islamic state’, and whether the government can fund the temple from the taxes paid by Muslims.

An interesting argument adduced by the Hindus is that if a temple cannot be built with taxes collected from Muslims, what about the taxes collected from the Hindu community during the past 70 years? Since no temple was built during this period, the government grant of Rs 100 million was actually money contributed by Hindus.

The controversy has thus placed the government in a quandary. If it goes ahead with state funding, it risks the wrath of the radicalised clerics and the population. If it does not, it will prove yet again that it does not have the spine to stand up to regressive forces. It will further dishearten the minorities who will see little option other than to flee the country to escape oppression and intolerance.

For Imran Khan, building the temple was meant to be a foreign policy statement, showcasing how well Pakistan treated its minorities. On several occasions, he has said he would show the Narendra Modi government ‘how to treat minorities. However, even this gimmickry has come unstuck.

Moreover, building one temple alone cannot atone for the persistent persecution of minorities. Pakistan is a country where churches are burnt, temples desecrated, minor Hindu and Christian girls forcibly converted to Islam and married off to their kidnappers. It is a country where even courts have sanctified marriages of underage girls citing Islamic rules about puberty, even though the Child Marriage Restraint Act makes it an offence to marry a girl below the age of 16. Thus, constructing one temple would not absolve these crimes. Even if it is eventually built, will it be safe, or will it be an open target for anyone trying to burnish his Islamic credentials?

Tilak Devasher is a Member, National Security Advisory Board