Haghia Sophia: Church to Mosque…And Back?

“ON THE afternoon of 29 May 1453, the Sultan entered the long-desired city…he dismounted and bent to pick up a handful of earth, which he poured over his turban as an act of humility before God. The cathedral of Haghia Sophia had become the mosque of Aya Sofya.” This is how Philip Mansel described the conversion of the Haghia Sophia by Mehmed II, the conqueror of Constantinople. Hopes of re-enacting the scene have grown on news that Turkey’s pious Prime Minister, Recep Tayyip Erdogan, plans to lead prayers in the building to mark the 561st anniversary. 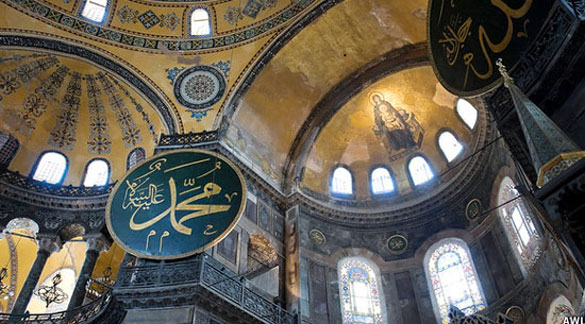 Mr Erdogan’s advisers dismiss the story as “fantasy.” Yet senior members of his Justice and Development (AK) party make no secret of their wish to reopen Justinian’s church to Muslim worship. Since 1935 it has been a museum, part of Ataturk’s drive to secularise Turkey and erase its Ottoman past. Islamists want to reverse that. “The Haghia Sophia is seen as a symbol of conquest, of Islam’s superiority over Christianity,” says Tugba Tanyeri Erdemir, a Turkish historian.

Bulent Arinc, a deputy prime minister, has already overseen the conversion of two other Haghia Sophia churches: one in Iznik in 2012 and the second in Trabzon in 2013. “We look at this forlorn Haghia Sophia [in Istanbul] and pray to Allah that the days when it smiles are nigh on us,” he said. Such remarks stoke Christian Orthodox passions. “The Haghia Sophia basilica was built in testimony to Christian faith and if it is to be returned to worship, it cannot be any other than a Christian one,” Patriarch Bartholomew told an Italian newspaper.

Turkey’s Islamists retort that their battle has a legal basis. The Haghia Sophia was the personal property of Mehmed II (the title deed survives). And in his will Mehmed II decreed that it should remain a mosque “until Judgment Day.” Yet some Muslim intellectuals argue for a compromise. “Yes, let’s reopen Haghia Sophia to worship. But let this worship be both Muslim and Christian,” suggests Mustafa Akyol, a commentator.

Paradoxically, thanks to Hami Yildirim, a deputy who on May 3rd submitted a draft law calling for the conversion back to a mosque, it may now not happen. This is because Mr Yildirim is close to Fethullah Gulen, the Pennsylvania-based preacher whom Mr Erdogan has accused of seeking to overthrow his government. Having failed to discredit the government through a corruption probe launched by his disciples in the judiciary, Mr Gulen seems bent on undermining its religious credentials. “They are using the Haghia Sophia to bait us. We will not walk into their trap,” says Bulent Turan, an AK deputy. Mr Arinc duly declared this week that a conversion was “not on the government’s agenda”.