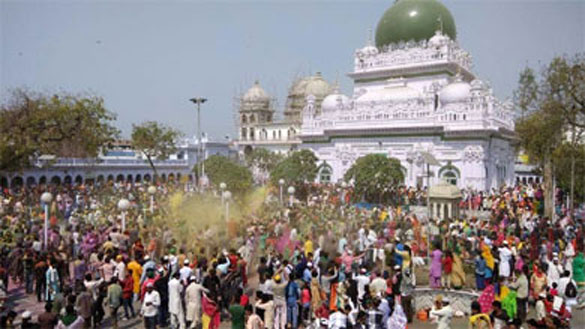 The ‘eternal order of the universe’, according to the Sufis, is based on love. Maulana Rumi once said, all matter is composed of invisible particles or atoms which are drawn towards one another by mutual attraction.

The unsightly ruins and mouldy walls meet the eye on every side, the moral decay is no less remarkable than the physical. The concrete Hindu-Iranian architecture features emerald green tapering dome and arches. Along with ivory minarets made up of Persian technique in the vicinity of the main dome.

Noted once as the birth place of great Sufis and divines, it is now popular for its exceptional amalgamation of varied cultures, religion, caste and creed living together in utmost peace and harmony.

How This Muslim Saint’s Shrine Witnesses a Colourful Holi

Dewa Sharif is an ancient town to the north of Barabanki, a city in Uttar Pradesh. It is widely known because of the shrine of the great Sufi saint Haji Waris Ali Shah — the place of his birth, adolescence, youth, ripeness, old age and final deliverance from the mortal coil of a fully realised Saint ‘Haji Waris Ali Shah’. His life is the saga of persistent, intense, spiritual quest, and attainments full of innumerable acts of love, kindness and universal brotherhood. Everyone loved and admired him in their own way. Hindus consider him to be Lord Krishna, Christians consider him as Jesus, and Muslims see him as the Prophet’s essence — a mesmerizing sensation which means that people of every community, caste and religion have their own beliefs, opinion, recognition and accreditation for it.

Holi in Dewa Sharif: Message of Universal Love and Brotherhood

The Holi celebrations at Mathura and Kashi are known to all of us, but very few know about Dewa Sharif. Breaking the traditionally accepted social conventions and taboos, coming together at the times of extreme hatred makes this small town an exceptionally notable place. Dewa Sharif is the only holy shrine in this country where Holi is celebrated in the premises of the shrine. That time of the year when the heat of summer is to bring about a drastic change in the surroundings with tree leaves drooping under the impact of blazing sun. The festival of colours transform the landscape.

Every year, Holi is celebrated here with the utmost zeal, love and enthusiasm. People from every community, irrespective of their caste, class and religion, come here to seek blessings. The day of Holi is marked as an expression of the epitome of universal love and brotherhood in this small town of Uttar Pradesh. This mystical place has a binding and eye-opening message for the people of the country:

“Love rules the Court, the camp, the grove,

For love is Heaven and Heaven is Love.”

Where There is No Place for Hate, Love Reigns

A home for the destitute, the Dargah provides free food and shelter to the people in the vicinity. Distribution of free Langar to the devotees which includes traditional dal-roti. During festivities, the Dargah community also prepares lavish food like biryani, Qorma, Sheermal and Kheer.

What makes this place one of a kind is the way Hindus and Muslims live together in peace and universal brotherhood. They enjoy each other’s festivals with fervour. At the time of Ramadan, Hindus share the Iftari and serve Sharbat to the Rozadaar. Also, at the time of Janmashthami, the tableau of Lord Krishna is taken around the campus of the shrine; people worship it with the deepest reverence.

At a time when our society is clearly divided along communal, caste and religious lines, when hatred has become rampant, this small town gives us hope to keep our hearts free from hate, hope to be enlightened with the beauty of humanity, hope to live fearlessly, hope to find tranquility in brotherhood, hope for truth and tolerance, and hope to be able to stand against injustice. The devotees of the saint promulgate the message of love: “Where there is no place for hate, and love reigns.”

Syeda Laraib Fatima Warsi is a Convergent Journalism student at AJKMCRC, Jamia Millia Islamia. She’s an aspiring writer who is fascinated by people, facts and events. She hopes to change the world, one word at a time. This is a personal blog, and the views expressed are the author’s own. The Quint neither endorses nor is responsible for them.

Original Headline: Holi Celebrations At UP Sufi Shrine Shines Out Amidst Polarisation