A Tale of Communal Harmony in India: My Umma (Mother) Has Honoured the Summons of Allah, Please Pray For Her Soul; A Cry of A Hindu Child for Her Muslim Mother 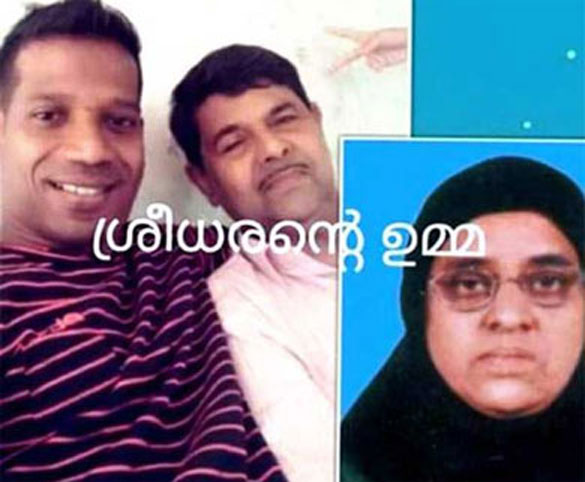 A  Facebook post by Sreedharan that “my Umma (mother) has honored the summons of Allah, please pray for her soul…if there is heaven, my Umma will surely find a place there,” has caught many eyeballs. It appeared it was a cry of a Hindu child for her Muslim mother. There was definitely curiosity raised through the FB post.

In deeper introspection, it turned out to be a tale of human love cutting across religion and other parochialism that could be an eye opener to those who are forcing the Muslims to chant Jai Sri Ram and killing them for being an Indian Muslim.

The 46-year-old Sreedharan’s facebook post is an amazing account of how interfaith bonds survive in India even in these trouble times when Hindus minds were rigged in just concluded General Election of 2019.

A pious Muslim couple Subaida Thennad and Abdul Azeez Haji had three children of their own and they fostered three more, Sreedharan and his two elder sisters Ramani and Leela. The Muslim couple adopted these Hindu kids when their widow mother, Chakki passed away due to sudden illness. Having no one to look after these three Hindu children, Subaida took them under her wings, with Sreedharan being hardly one, and others being less than five years of age.

All the six children lived in the same house under one roof, in the care of the loving Muslim parents.  They all ate together, played together and slept together and woke up together without an feelings of religious divide between them.

“Our foster parents brought us up like their own children and educated us. They got my sisters married off. Though we were taken in at an impressionable age, they never tried to convert us to their religion, said Sreedharan, who works in Oman in the FB post adding, his foster mother to him was like her own mother (Umma).

News of her mother’s death shattered Sreedharan who cried on his personal loss, holding bottles of perfume that he had bought for his beloved mother in Oman. He chose not to rush home in Kerala as he lacked courage to see her dead body. And instead wept and prayed for the departed soul.

The death of Subaida Thennad would have gone unnoticed outside her home in Kalikavu village in Nilambur taluk of Malappuram district in Kerala. It is her foster son, Sreedharan, who had put up a Facebook post that tickled many funnels hearing such tale of communal harmony, where recently one Tabrez Ansari was done to death by a Hindu mob for reasons Ansari being an Indian Muslim.

Another story of Communal harmony has come from Belarikhan village under the Gosaiganj Assembly constituency in Ayodhya district of Uttar Pradesh. Here in a rare gesture some Hindus have donated 1.25 bighas of land to Muslims for using it as their burial ground.

As per records, the land belonged to the Hindus but some Muslims have buried their dead since it was by the side of a graveyard. The land had been a bone of contention between the two communities and there were disputes and tension over this issue for years between them.

However some nine Hindu gentlemen who were shareholders of the land, signed a registered deed for 1.25 bighas of land in favour of the Qabristan Committee, Gosainganj on to bury their hatchet once and for all.

Khabbu Tiwari, the local BJP MLA who took the initiative said; “It’s a gift from the Hindu community through a proper deed and stamp duty, as the tradition of Hindu-Muslim brotherhood in Ayodhya has a long history. This is a small token of love from Hindus to Muslims and I hope this amity will continue,” he added.

In these days of Hindu religious fundamentalism where some radical Hindus are trying to lynch Muslim through mob attacks, such tales of goodness must be highlighted.  These are rare instances of interfaith gestures of communal harmony in the country and reflect how India society is interwoven from below.

These stories will definitely give a tight slap to those relentlessly working overtime to increase the religious divide between the Hindus and Muslims in the country. It’s also a lesson or two those who are indulging in the conspiracy of silence by not opening up their mouths against those perpetrating hate crimes against Muslims in India.

Syed Ali Mujtaba is a journalist based in Chennai.