Lingayatism Explained: Similarities between Islam and Lingayatism; Both Believe In A Single God and No Rebirth 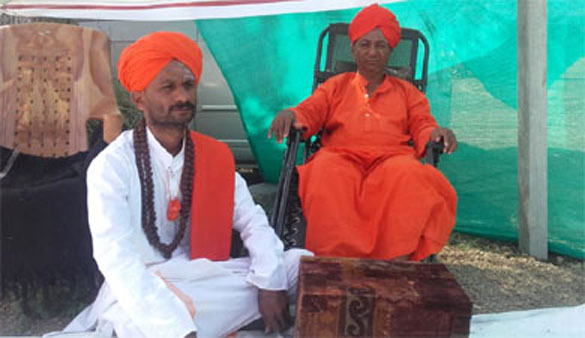 File photo of the Muslim seer of Lingayat mutt, who is seated to the left (News18)

The recent conversion and appointment of a 33-year-old married Muslim man to a Lingayat mutt in Asuti village of Karnataka’s Gadag district has generated huge curiosity about the Lingayat community.

But it is not the first such instance. Nearly 25 years ago, a Muslim professor got converted to Lingayatism and has been the head of a Lingayat mutt in Chagarehalli village of Kalaburagi district in Karnataka. He was renamed as Basava Siddha Kabiranand Swamiji. His mutt is known as Marulashankaradev Mutt. Incidentally, Marulashankaradev was believed to be a saint who came from Afghanistan to become a follower of Basavanna, the founder of Lingayat religion, in the 12th century.

A third identical example is that of a personal physician of the Nizam of Hyderabad, a Muslim, who claimed to be the reincarnation of Chennabasavanna, the nephew of Basavanna and another great saint of the 12th century. This physician founded an organisation called Chennabasaveshvar Siddiqui Anjuman around 1910 in Hyderabad and preached Lingayat religion.

More than 200 years ago, a Muslim fakir embraced the Lingayat religion in Shirahatti town and lived in a mutt known as Fakeereshvar mutt in Shirahatti, a taluka headquarters town in Gadag district. The name Fakeer itself indicates that the saint was a Muslim. Even today, during the annual fair in that town, a Muslim doli as well as a Lingayat palanquin are taken together in public procession.

Just last week, a Muslim man got Lingayat deeksha in a Gadag mutt.

There are quite a few similarities between Islam and Lingayatism. Both believe in a single god. There is no rebirth after death in both faiths. Emphasis is laid on community council — Jamaat in Islam and Anubhav Mantap in Lingayat. Each person should give part of his earning to the society (zakat in Islam and Dasoha in Lingayat). According equality to all human beings is compulsory in both.

Idol worship is not allowed in these two religions. Both believe that god is invisible, infinite, incomparable, omnipotent and omniscient. Mediation of priests is not allowed and the relation between god and man is direct and simple. Mediation or prayer alone is the means to realise god and one must surrender oneself totally to god. Islam means surrender and ‘Lingayat Sharana’ in Kannada means one who has surrendered to god.

Death is celebrated and not mourned in these two faiths. There is nothing like pollution and purification in Islam and Lingayatism.

In Lingayat religion, anybody can become the head of a mutt. There is no restriction on religion or caste. There is a mutt headed by a Banjara person. Another mutt has a madar person as the head. A third mutt has a barber and a fourth one has a stone worker as its head.

Women can also head a Lingayat mutt. There are more than a dozen women heading Lingayat mutts in Karnataka. In Lingayat religion, women are equal to men in all respects. There is no taboo against menstruating women, and child marriage is forbidden. Widows can remarry, women can adopt children in their own right. Women wear ishthalinga on their bodies like men, receive religious Diksha in the same way as men and perform most of the religious rites. In the past, four Lingayat queens ruled their respective states (Kittur Chennamma, Keladi Chennamma, Kakatiya Rudramma, Belavadi Mallamma). As many as 36 women participated in the formation of Lingayat religion in Anubhav Mantap, the religious parliament of Basavanna in the 12th century.

Since Lingayats are strict vegetarians, eating meat, fish, or any animal flesh is forbidden, which applies to all converts. Similarly, drinking any intoxicating liquor is prohibited. Smoking tobacco, ganja, opium etc is banned. These are essential before conversion or diksha.

Family life and marriage is encouraged over celibacy and sanyasa. Strict personal code of conduct is always respected.

The basic principles of Lingayat religion are ishthalinga prayer, compulsory work (kayaka), contribution to the community service (dasoha), panchacharas as personal ethics, belief in guru, linga, and jangam, belief in six stage evolution of personality, assistance of eight supporting elements, absolute equality of all men and women irrespective of caste, religion, sex, class and race. These sound like UN Declaration of Human Rights. And indeed they are.

A break away sect of Lingayatism is called Veerashaivas who follow more Vedic and Hinduised versions. Lingayats are non-Vedic, non-Agamic and egalitarian people.

Lingayat beliefs run contrary to Vedic beliefs. They badly reject Vedas, Agamas, Puranas, Shastras, and the related mythologies, customs and beliefs. There is no hell or heaven for a Lingayat. There is no rebirth; the concepts of ‘sin’ and ‘merit’ largely differ from those of Vedics.

Lingayats have no gotras, no sutras, no sutaka. They don't observe ‘pollution periods’ on occasions of birth, death or menstruation, and reject superstitions. They don't go on pilgrimages. Lingayats bury their dead and do not do rituals for their ancestors.

Followers of Lingayatism also reject the supremacy and superiority of Brahmans. They do not invites Brahman priests for any occasion. All rites of passage are performed by their gurus.

For Lingayats, Shiva is not in human form. He is not visible, he is infinite. He is neither man nor woman. He is not married, nor has a family or children. Parvati, Ganesh, Skanda, Nandi, Veerabhadra, Kailash, devlok and narak don't exist for Lingayats.

Their theory of cosmology and creation reject all six versions of the Rigveda: Lingayat cosmogony is unilinear and simple. Lingayats believe in Bayalu Siddhanta (void). They consider that god lives in the body and after death the human being merges in the ultimate. So there is no rebirth, no hell nor heaven. No soul.

Original Headline: Muslim as Head Priest, Burial of the Dead, No Concept of Rebirth and Rejection of Hindu Trinity: Lingayatism Explained