Gholam Jilani, A Prayer Leader (Imam) At A Local Mosque, Was Tortured For The Crime Of Organising Ram Navami, A Hindu Festival? 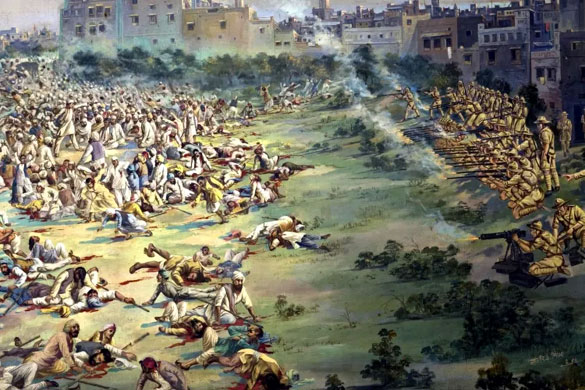 An artists vision of the Jallianwala Bagh massacre

“They (British Police) drove a stick into his (Gholam Jilani’s) anus. Also, he was in a most pitiable condition. I saw his urine and excreta coming out. All of us, who were outside, were told by the police that those who did not give evidence, would be treated like that.” This was the statement recorded by Haji Shamshuddin of Amritsar in 1919 after the Jallianwala Bagh massacre.

Can one believe that Gholam Jilani, a prayer leader (Imam) at a local mosque, was tortured for the crime of organising Ram Navami, a Hindu festival?

While our country has always commemorated the Jallianwala Bagh massacre carried out on 13 April 1919, by the British soldiers, the reasons behind the massacre have largely been erased from public memory. History books have comfortably silenced the immediate threat in front of the mighty British Empire to counter which Colonel Dyer fired upon unarmed Indians at Jallianwala Bagh. The empire was terrified at the prospects of Hindu, Muslim, and Sikh unity against their oppressive rule. The fear seemed to become a reality on 9 April 1919, when Ram Navami was celebrated by Muslims of Punjab.

The report that was tabled in the British Parliament after the massacre remarked, “on the 9th (April) the annual Ram Navami procession was held, the authorities deciding that it was inadvisable to interfere with it. It was made the scene of public fraternization between Hindus and Muhammadans. The Commission speaks of the temper of the populace as still being in a dangerous condition; and suggests that the cause of Hindu-Muhammadan unity, otherwise laudable, can on this occasion only have been preached as meaning unity against Government. Elsewhere it speaks of the procession as being of a "highly seditious and inflammatory character." The report further said, “Though it is a purely Hindu festival, it was on this occasion here (as elsewhere) celebrated by Hindus and Muhammadans alike. There was much public fraternization. Hindus drinking out of vessels held by Muhammadans; for the usual cries in honour of Hindu deities, the crowd substituted shouts for Hindi-Mohammedan unity.”

How grave was Hindu Muslim unity a threat to the empire can be gauged from what the Hunter Committee Report, formed after Jallianwala Bagh Massacre, had to say about Ram Navami that year. The report said, “We think it clear that in Amritsar as elsewhere efforts towards “ unity ” had been made largely and indeed frankly in political interest. That the disturbing state of political feeling in Amritsar would assist and did assist to throw the two warring creeds into a common camp vis-a-vis the Government is intelligible enough. Dr. Kitchlew’s influence in particular was and had consistently been, in the direction of unity and doubtless, in Amritsar, this fact accounts for more than does the general movement, which has for at least two years been well marked all over India.” It further stated that, “contrary to previous practice, the festival (Ram Navami) was very largely participated in by Muhammadans, and along with the usual shouts political cries were freely raised “Mahatma Gandhi Ki Jai,” “Hindu-Mussalman Ki Jai” The effect of the evidence before us is that the festival became a striking demonstration in furtherance of Hindu-Muhammadan unity — people of the different creeds drinking out of the same cups publicly and by way of a demonstration.”

The Government of Punjab, in another report, wrote, “on the (Ram Navami) 9th April, in pursuance of the conspiracy to excite disaffection and feelings of enmity against Government, and on the occasion of the Ram Navami procession, the accused, Rambhaj Datt, Gokal Chand, Dharra Das Suri, and Duni Chand, and others encouraged the fraternization of Hindus and Muhammadans against the Government as by law established.” Just imagine that the British had thrown away all the pretence of being secular and came out open with their divide and rule policy where the ‘fraternization of Hindus and Muslims’ was called a threat to the ‘peace’ and ‘order’.

Indians should learn that their strength lies in unity. Our unity terrified the mighty British empire and when we were divided they ruled over us.