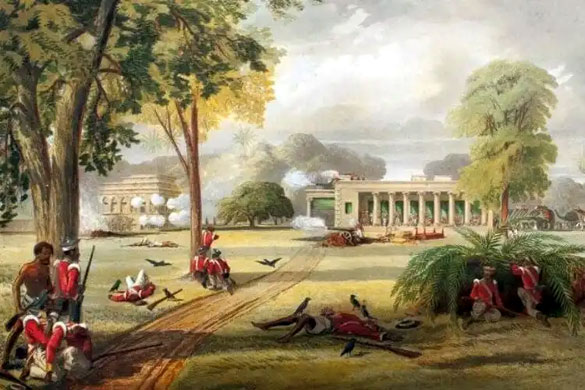 ‘Divide and Rule’ was the political tool used by the British Government to keep India under its control. The British tried to divide Indians into several groups and the most important division they created was religious communalism. Muslims, Hindus, and Sikhs were made to believe that they were different people and enemies of each other.

In 1857, when the Indians raised the flag of its First National War of Independence the British realised that their only chance to subjugate a large country like India was through dividing its people into small warring groups. The plan was put into execution in 1857 on a large scale.

Princely states were offered monetary awards with communally charged language. On 1 December 1857, the Secretary to Chief Commissioner of Oudh wrote to the Secretary to the Government of India that he could not find any taker for Rs. 50,000, which had to be distributed among Hindus of Bareilly to raise arms against the Muslims fighting against the British.

He wrote, “About the Chief Commissioner’s letter to his Lordship the Governor General dated, 14th September in which he stated that he had authorized the sum of Rs. 50,000 to be expended in an attempt to raise the Hindoo population of Bareilly against the Mahommedan rebels. I am directed to submit the accompanying extract of a letter from Captain Gowan dated the 11th ultimo from which his Lordship in Council will perceive that the attempt was quite unsuccessful, and has been abandoned without the expenditure of any portion of the amount in question.”

Captain Gowan wrote, “I have been quite unsuccessful in my attempt to induce the Thakoors roundabout here to collect together any number of men.” Needless to say that attempts of dividing Hindus and Muslims miserably failed. Common people would not accept money to fight among themselves. But, can it be said of rich royal ‘Indians’?

The British Government while asking the assistance from Rajput states claimed that the colonial rule had arrived in India to liberate Hindus from repressive Muslim rule. It claimed that before them, Hindus were not allowed to build temples. It is a part of history that the Princes of most of these states helped the foreign rulers or stayed neutral. The real reason was the offer made by the British Government, “All assistance given by the Rajpoot States will be rewarded with that liberality which has ever distinguished the British Government in its dealings with them.” But, did such communal motivations affect common Indians? No. Common people raised the flag of revolt in several of these states.

These letters, bribes, communal language, and desperation to create Hindu Muslim riots show how important it was for the foreign rule to survive. The Indians, mostly, did not fall into the trap laid but sadly later on people were made to fight through stooges called politicians. The road to glory for us passes through the unity of all the Indians.