Does the Kavardo Cross Really Shed Light on Early Christianity In Baltistan?

Kavardo is a sprawling village in a narrow valley on the right bank of the Indus River, just across from Skardu. Recently a large marble cross was found in a remote part of this valley. Finely carved out of white marble, it is in the shape of a Latin cross, that is with three equal arms and the fourth longer than the rest. This is the classic shape of the cross used in Christian worship. 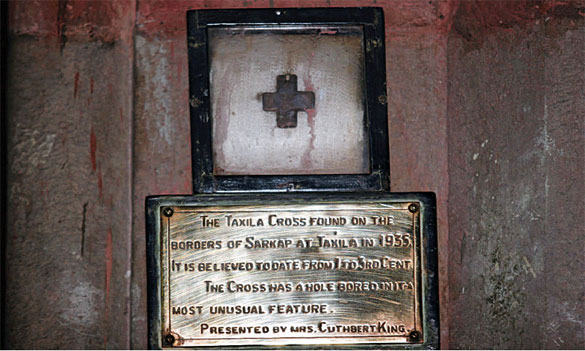 The Taxila Cross/Photo by the writer

From the couple images available, it clearly seems to be of very fine, apparently modern, workmanship and reportedly measures 7x6 feet. According to one Professor Naeem Khan who has seen it, it appears to have come ‘directly from the heavens’. He estimates it is 1,000 to 1,200 years old. In consequence, it is being billed holy and a certain sign of very early Christianity in Baltistan. These ‘experts’ are forwarding extravagant theories of Nestorian Christians living in Baltistan in the early Middle Ages.

The gentlemen quoted in the news report have evidently heard of early Christian travellers in or near Baltistan. Clearly they have not had recourse to any literature on those travellers. This refers to the 17th and 18th century Jesuit missionaries who travelled to Tibet and China from India. It will be too tedious to list all the missionaries who undertook this journey. I will therefore refer the curious reader to Cornelius Wessels’ Early Jesuit Travellers in Central Asia.

From Wessels we learn that none of the dozen Jesuits who undertook this journey passed through Baltistan. The first, Bento de Goes, arrived in Lahore in 1595 and, having travelled through Kabul, Badakhshan and Wakhan, eventually died in China in 1607. All the rest travelled by the direct route from Srinagar through Kargil and Ladakh either into Tibet or over the Karakoram Pass to Yarkand and on.

Of all those medieval travellers, only Ippolito Desideri who — having come through Srinagar and Kargil — was in Ladakh in 1715-1716 and devoted a paragraph describing “Little Tibet … called Baltistan”. His account is based entirely on hearsay, however. Had there been a community of Christians living in Baltistan, these devoted missionaries would have been overjoyed and would certainly have travelled the extra miles to meet with their co-religionists. Sadly, they make no mention of believers carving large marble crosses to commemorate the suffering of Christ.

In October 1892, encamped at the foot of the Zoji Pass en route to Kargil, at the end of his exploration of the Karakoram Mountains, William Martin Conway ran into Reverend Donsen, a Dutchman heading the Ladakh Mission. At that time, the reverend had been in Baltistan off and on for five years. Even Donsen showed no knowledge of or excitement concerning the earlier signs of a thriving Christian community in the area.

The earliest literature on Baltistan is Mirza Haidar Daughlat’s Tarikh-i-Rashidi (circa 1530). A cousin of Babur’s, the Mirza was part of a Mughal army come down from Yarkand to plunder Baltistan. He saw a few Buddhists, but the majority were Muslims in the country. Once again, cross-manufacturing Christians were missing. 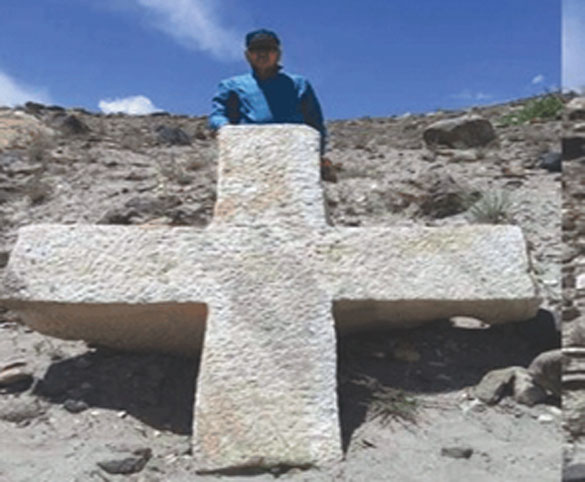 A photo of the marble cross discovered in Skardu, as printed in a newspaper| Courtesy Salman Rashid

The news report on the Kavardo cross quotes Wajid Bhatti, a PhD research scholar at the Quaid-i-Azam University of Islamabad, as saying the cross might belong “to early Christians of the Parthian dynasty”. He is quoted as saying that “Nestorian settlements in Northern Areas used to live and worship cross like this [sic].” This is, of course, without any evidence whatsoever.

The cross is the oldest talisman known to humankind. It was easy to draw and because of that and the equilibrium it represented, it became a holy symbol. If enclosed with a circle, it was the sun and, without it, was the world. It was found in Mesopotamia 4,000 years before Christ and in the Indus Valley a little later. Much later, we find a plethora of the cross and its variant, the swastika, all over the place, from pre-Buddhist times to the Muslim period.

The postulate arising out of the Kavardo cross harks back to another double cross that occurred nine decades earlier. In the 1930s, the famous Taxila Cross was found and presented to Cuthbert King, the deputy commissioner of Rawalpindi. Taxila had been excavated and shown to be as ancient as the early third millennium BCE, and so the cross was taken to be a sign of Christianity in this ancient city. Today, this cross, duly framed, adorns a wall in the Cathedral at Lahore.

Now, in 1822, 100 years before the Taxila Cross was discovered, a manuscript came to light in Syria. Written circa 230 CE in Syriac, by an anonymous author, it was entitled Acts of Saint Thomas. It told of this apostle’s first century CE journey by boat to India to the court of Gondophares, where he converted virtually everyone to the ‘one and only true faith’. Going by this account, Gondophares held court in a coastal city either in Sindh or Gujarat. Christian Europe celebrated the Acts as validation of the universality of their belief and that even the India they considered heathen had already converted within decades of the death of Jesus.

The 1930s were a time when archaeologist John Marshall had uncovered the secrets of Taxila and we knew that Gondophares, the Parthian, was ruling over this wonderful city in the first century CE. And so, DC King, with an obvious smattering of knowledge, was not alone in celebrating the Taxila Cross. The church in India embraced it as proof of what had never been.

It was an altogether another thing that, even at that time, Acts of Saint Thomas was known to be a fictional work. Apparently the class of ‘historian’ that we know as Nasim Hijazi here was not unknown in antiquity. But if in our times, the high and mighty of Pakistan can advertise a Turkish soap opera as real history, we can forgive devout Christians for believing in the fictional Acts.

The cross that misled King and others was found not by an archaeologist but by a farmer just outside the ruins of Sirkap, the second city of Taxila. It was not from a stratum that could be dated. That research scholar Bhatti believes that the Kavardo cross belongs to Parthian Christians shows that he has heard of the Taxila Cross but it also illustrates the poor standard of PhD research in Pakistan.

As for the cross in antiquity: it was not a symbol of Christian worship in the 1st century CE when Saint Thomas supposedly came to India. At that time, it was a hateful sign of oppression and cruelty. Interestingly, when the Acts of Saint Thomas was being written in Syria or southern Turkey, another devout Christian, the Roman barrister Marcus Minucius Felix, living in Algeria, was writing that Christians did not worship the cross ‘like pagans do’.

The cross became a holy symbol only after the Roman emperor Theodosius (reigned 379-395) abolished execution by crucifixion. It was only now that its cruel and negative associations were lost. Thereafter, it did not take long for the cross to become a sign of Jesus’ sacrifice for the rest of mankind.

The researchers who have declared the Kavardo cross as having descended directly from the heavens or those who deem it a sign of very early Christianity in Baltistan need to hold their horses. They should recall the time, less than three decades ago, when the greatest names in Pakistan archaeology declared the Dalbandin find of the ‘mummified body of an Achaemenian princess’ as authentic. That would mean the mummy was more than 2,000 years old. Within weeks it was found to be a 1930s cadaver, dressed up by a clever fraudster to sell for a few million dollars.

The only pragmatic word on the Kavardo cross comes from the respected Baltistan historian Abbas Kazmi. He notes that artisans from the court of the great Raja Ali Sher Anchan (1591-1625) could possibly be authors of this artefact.

In my view, the Kavardo cross is nothing to get excited about, and it has nothing to do with Christianity.

Salman Rashid is a fellow of the Royal Geographic Society