Holi Is All about India’s Syncretic Culture; and, It Isn’t about Religion but about the Spring Season 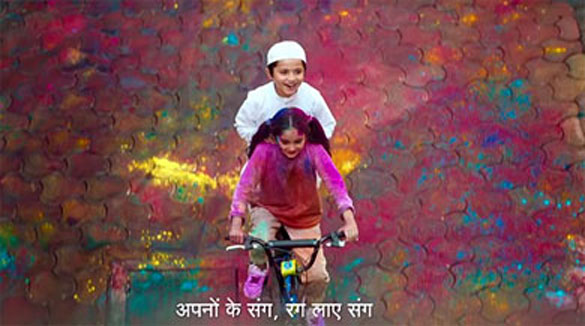 The ad has got the goat of the Hindu Right and evoked the charge of “love jihad” is also not surprising given the polarising times we are living in.

Does it make a Muslim communal in any way if she doesn’t celebrate Holi with her Hindu friends and acquaintances? She is often told: The Mughal courts used to be bathed in colours on this day; that the festival is all about India’s syncretic culture; and, it isn’t about religion but about the spring season.

These contentions are alright, but the answer to the question is a firm “No”. Reason: A Muslim has every right to choose not to participate in Holi or any festival and — still — remain secular. There is a mainstream assumption that a Muslim is a good Muslim only when she celebrates all festivals. Those who stay away are thought to be orthodox and unaccommodating. That assumption itself is communal in nature and gives no room for choice.

It would have been more progressive had the boy playing a Muslim in a recent detergent brand commercial — which is facing flak for being “anti-Hindu” — said that he doesn’t want to play Holi, and the other children had happily let him be. That would have sent out a stronger message of inclusivity, harmony and, most importantly, choice and consent.

This expectation of participation and conformity is not uniform, and is always guided by privilege. For instance, step into one of the many multi-storeyed apartments that dot Noida, Gurugram or Ghaziabad, and watch their residents celebrate Holi, Diwali and Janmashtami with gusto, more so now than earlier. They conveniently ignore Eid, while wearing secularism on their sleeves. Most of the schools where children — of the same age group as those in the detergent commercial — learn their values, forget Muslim festivals, while Hindu festivals are Indianised and Christian festivals secularised.

We are so used to living with such double standards that these erasures almost always go unnoticed. The ad ends with the girl telling the boy: “Baad Mein Rang Padega (you will be sprayed with colours later)”. But was that necessary? The boy’s exclusion from Holi festivities wouldn’t have torn apart the social fabric of the country. On the contrary, it would have only strengthened it.

There are hundreds and thousands of Muslims who do not take part in Hindu festivals. Likewise, Hindus are not expected to fast during Ramzan, nor does the entire community go around giving Eid Mubarak hugs. Neither action — nor inaction — disturbs communal harmony.

That the ad has got the goat of the Hindu Right and evoked the charge of “love jihad” is also not surprising given the polarising times we are living in. While kids in the ad are barely six-seven year-olds, the hardliners among the Hindus believe that the Muslim boy will make the Hindu girl fall in love with him and, later, force her to convert to Islam. Yes, that is laughable, and many, while responding to #BoycottSurfExcel, have rightly said that those behind the Twitter campaign can do with a detergent themselves.

Of course, the ad does not promote “love jihad”. But what it does, in its bid to promote the detergent brand with a secular theme, is perpetuate bad stereotypes, that too by using children, which is dangerous. Do the children — remember they are six-seven year-olds — already know there are Hindus, Muslims, Christians and Sikhs among them? Do they believe that Hindus and Muslims dress differently? Do they also know there are Hindu names and Muslim names? Isn’t that horrific?

Then, when have we seen a boy as young as the one shown in the ad wearing a pristine white Kurta-pyjama, skull cap in place, stepping out on Holi to go to a mosque? And, why show him as a Muslim at all and others as Hindus? Why tell them that Holi is a festival of Hindus and the mosque is where Muslims go? Shouldn’t children be kept away from religion/s and their many conflicts and stereotypes? Crucially, why couldn’t they have just featured adults in the advertisement and left the children alone?