The Quran Not Only Confirms the Messages Contained In the Earlier Divine Books, but Also Updates Them

1.    The Quran is not hostile to the People of the Book collectively.

2.    The Quran allows the People of the Book to lead their lives according to their own scriptures.

3.    Muslims are advised to engage with the People of the Book in dialogue.

4.    The Quran envisages a society in which people of all the religions live peacefully.

The holy Quran is the last of the divine books revealed to the prophets by God. The Psalms, The Torah, The Bible and the Quran are the other four known holy books revealed by God, among many others around the world not fully recognised by or known to Muslims. The Quran is the last divine book which is a reminder of messages contained in earlier books. According to Quran there is no community or nation on earth that has not received a Prophet and no Prophet who has not received a book. According to a Hadith narration there have been 1, 24,000 prophets sent to all corners of the planet. That’s why the Quran is also called Zikr (reminder). The Quran not only confirms the messages contained in the earlier divine books but also corrects the deviations in the belief of the followers of the People of the Book.

Again from the verses of the Quran, it becomes evident that Allah grants the rights of the People of the Book in a pluralist society. Christians and Jews can live peacefully with their own personal laws as long as they commit mischief.

” Say, ˹O Prophet, ˺ “O People of the Book! You have nothing to stand on unless you observe the Torah, the Gospel, and what has been revealed to you from your Lord.”(Al Ma’idah: 68)

The Quran mentions the wrong practices and sins the Jews committed but at the same time, it acknowledges the fact that all the Jews are not sinful or wrongdoers. A section of them are upright and have faith.

“We forbade the Jews certain foods that had been lawful to them for their wrongdoing, and for hindering many from the Way of Allah taking interest despite its prohibition, and consuming people’s wealth unjustly. We have prepared for the disbelievers among them a painful punishment. But those of them well-grounded in knowledge, the faithful ˹who˺ believe in what has been revealed to you ˹O Prophet˺ and what was revealed before you—˹especially˺ those who establish prayer—and those who pay alms-tax and believe in Allah and the Last Day, to these ˹people˺ We will grant a great reward”.(Al Nisa:160-162).

The above quoted verses make it clear that the Quran does not consider the whole community of Jews or any other religious group disbelievers. Only the disbelievers among them will be given a painful punishment. But the faithful among them who pay Zakat, offer prayers and have firm belief in the Oneness of God and the Last Day will be rewarded in the Hereafter.

Other verses of the Quran confirm that not all of the Jews are rebellious. A section of them are faithful in the eye of God.

“Had the People of the Book believed, it would have been better for them. Some of them are faithful, but most are rebellious”. (Aal-e-Imran: 110)

“Yet they are not all alike: there are some among the People of the Book who are upright, who recite Allah’s revelations throughout the night, prostrating ˹in prayerThey believe in Allah and the Last Day, encourage good and forbid evil, and race with one another in doing good. They are ˹truly˺ among the righteous”.( Aal-e-Imran:113-114)

“Indeed, there are some among the People of the Book who truly believe in Allah and what has been revealed to you ˹believers˺ and what was revealed to them” (Aal-e-Imran: 199). 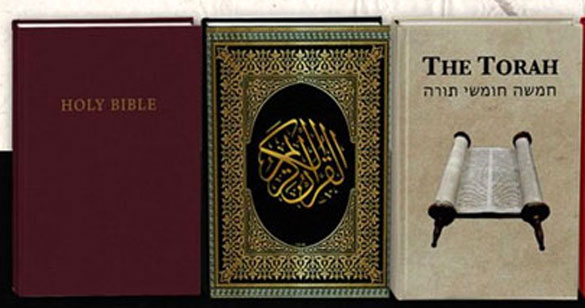 “O People of the Book! Do not go to extremes regarding your faith; say nothing about Allah except the truth.1 The Messiah, Jesus, son of Mary, was no more than a messenger of Allah and the fulfilment of His Word through Mary and a spirit ˹created by a command˺ from Him.2 So believe in Allah and His messengers and do not say, “Trinity.” Stop!—for your own good. Allah is only One God. Glory be to Him! He is far above having a son! To Him belongs whatever is in the heavens and whatever is on the earth. And Allah is sufficient as a Trustee of Affairs.

Therefore, the Quran advises Muslims not to have confrontation with Christians and the Jews on some issue of difference and advises them to engage with the People of the Book in dialogue concentrating on the points of agreement, ignoring the points of difference.

“Do not argue with the People of the Book but gracefully, except with those of them who act wrongfully. And say, “We believe in what has been revealed to us and what was revealed to you. Our God and your God is ˹only˺ One. And to Him we ˹fully˺ submit.”(Al Ankabut: 46)