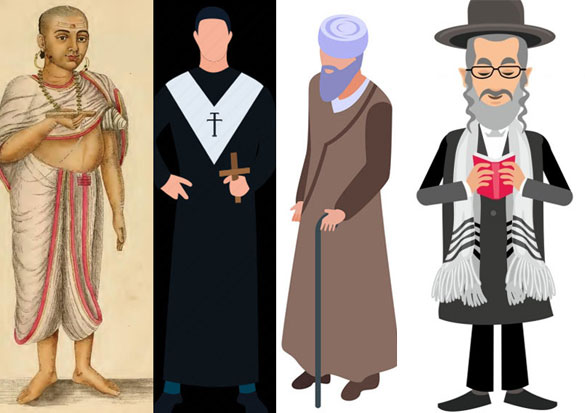 However, the concept of clergy in these societies (except in Hinduism) is not supported by their respective scriptures – the holy Quran, the holy Bible and the holy Torah. Only in Chhandogya Upanishad, the Brahmins have been granted a special status. The devotees are expected not to speak ill of the Brahmins.

The most striking aspect of the titles Maulana, Rabbi, Father and Brahmin conferred on the religious heads is that they are in fact used by the Holy Scriptures for God and not for the religious heads or priests. The priests adopted these titles to suggest that they were next to God and so very important and revered persons.

For example, the term Maulana which is used for religious heads or priests of Muslims in the Indian sub-continent (India, Pakistan, Bangladesh, Nepal and Sri Lanka). A Maulana is a religious scholar having graduated from a madrasa and has authority on Shariah matters. But the literal meaning of the word Maulana is our God or our Lord. (Maulana). The word occurs in the Quran on two occasions (2:286 and 9:51). The word is not used in the Arab world and in Iran it is used only to mean the philosopher Rumi (Maulana Rum). In some African countries, the word means any scholar or secular public figure. How and when the word meaning God came to be used by Muslims in the Indian sub-continent for religious heads is a matter of research.

The word Rabbi is used for religious heads or priests in Judaism.  A Rabbi has the theoretical knowledge of Judaic religious texts like Talmud and is responsible for the services in a Synagogue. But the word Rabbi does not find a place in the Hebrew Bible. It was used for the Talmudic era religious teachers who would assemble to codify Judaism’s written and oral laws. The word rabbi is derived from the Hebrew word rav meaning the great one or master. In later years, that is from the 1ST century CE, the word has been used for religious heads of Jews. The word in Arabic means my God or my Lord. Therefore, the Rabbis adopted a word that literally meant my God.

The Christian priests are called church father or generally, Father. In Trinitarian Christianity, God is called the Father. He is God the Father, God the son and God the Holy Spirit. In many verses in the New Testament, God describes himself as Father to the humankind. In the early era of Christianity, from the 1st century to the 8th century CE, influential Christian theologians and writers who established intellectual and doctrinal foundations of Christianity were called Church Fathers.  But the church priests of the later era also used the term for themselves because it gave them a sense of superiority in their community. Thus, they used a word for themselves which God used for himself in the Bible.

In Hinduism, the temple priests are called Brahmin but the word is pronounced a little differently from the same word meaning the formless attributeless God Brahmin. Brahmin meaning the priest is pronounced as Brahmin with a long “A”. In the Vedas, Brahmin is the creative principle, or the Supreme Being which creates, destroys and sustains the universe. The Vedas and the Upanishads use the word Brahmin for the Supreme Being or the indwelling soul of the material world a number of times. However, as mentioned earlier, Chhandogya Upanishad has recognized the institution of Brahminhood and asks devotees to be respectful of Brahmins.

The word Maulana among Muslims seems to be inspired by the Judaic and Christian traditions of adopting the word meant for God though Muslims, particularly in the Indian sub-continent talk ad nauseam of Jewish conspiracies to corrupt Muslim minds and their beliefs.