Where Caliph Yazid Becomes Ravana And Imam Hussein Is Hanuman’s Brother: How Muharram Is Celebrated By Both Hindus And Muslims In Large Parts Of North Karnataka 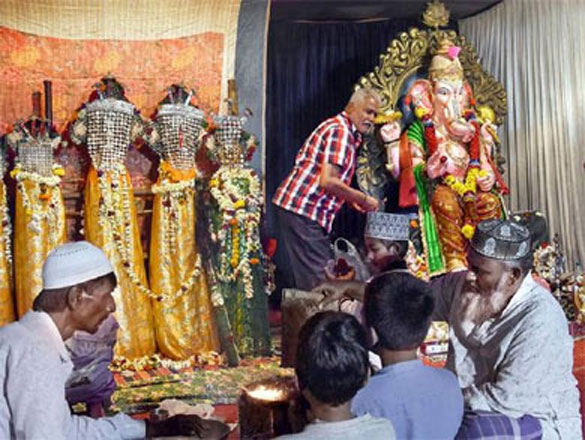 Ganesh Chaturthi and Muharram being celebrated in the same pandal in Hubli.   | Photo Credit: PTI

It is Ashura, the 10th day of the holy month of Muharram. The sun is setting slowly as we enter the Peeranwadi Dargah near Belagavi and people are pouring in on foot, on bikes, in auto-rickshaws, vans and cars. Soon the ground before the Dargah is overflowing. Temporary shops are doing brisk business in sweets like alipak (ginger-coconut Burfi) and puffed rice. A fire pit the size of a boxing ring glows brighter than the crimson horizon.

Meanwhile, a colourful procession is under way in the village, which is about 10 km from Belagavi town in north Karnataka. Riwayat singers and kolata dancers perform along the procession, joined by boys dressed in bright new clothes and bullocks with painted horns.

An hour later, the entire village is on the grounds opposite the Dargah. All around are people carrying flags — a crescent moon on green — and raising slogans like Hassan Hussein ki Dostara Din or Moulali Zindabad, in praise of members of the Prophet Muhammad’s family who were martyred in the Battle of Karbala 13 centuries ago.

The faithful carry Alams (flags) and run across the pit several times amid loud slogans. This goes on all night. When the sun rises, the Alams and peer Panjas (cutouts of hands symbolising the saints) are taken to the stream outside the village for immersion. The celebrations begin with the installation of the Panjas and Alams in a platform or in the courtyard of a mosque built exclusively for Muharram, and end with their immersion on Ashura.

A typical Muharram in many parts of north Karnataka is a celebration of the whole village, and not just of the Muslim community. Rituals like self-flagellation are observed in cities like Bengaluru with its significant Shia population, and Bidar, which has a colony of Iranis, but celebrations in many villages are vastly different. Ashura, observed as Qatal Raat (‘night of the murder’), has transformed into the Kannada Kattala Ratri (‘dark night’) here.

Ashura marks the death anniversary of Hazrat Imam Hussein ibn Ali, grandson of the Prophet Muhammad, but it has assumed the shape of a folk festival here. “The transformation of a day of sadness into a day of celebration is amazing,” says Rahamat Tarikere, a professor at Hampi Kannada University who has studied Muharram practices and authored a book on it. It is much like the celebration of Urs, the death anniversaries of Sufi saints observed without communal barriers in many parts of the country.

The Battle of Karbala that witnessed the martyrdom of Hussein and his relatives is recalled in songs, dances and stories during the 10-day Muharram festivities. However, the tragedy has been transformed over the centuries into a festival that embodies joy, fraternity and harmony. The historical facts of the battle — between Hussein and the forces of Caliph Yazid I in October 680 in Karbala, Iraq — are quite different from the stories you hear during Muharram in this region. They speak volumes about the syncretism of these celebrations, infused with local myths and beliefs.

For instance, in Ayanur in Ballari district, Karbala is remodelled as Lanka. Yazid is Ravana and his effigies are burnt. In Ramdurg, Hussein is the younger brother of the village deity, Durugavva. During the immersion procession, he stops in front of the Durugavva temple to talk to his sister. In Agasanur, villagers don’t wear slippers or sleep in beds for 10 days. On Ashura, villagers dressed in white go to the house of the Jangama priest (a Lingayat) and invite him to the Dargah. There, he transfers the peers and Alams to Muslims.

The village of Bilagi in Bagalkot district lights up on the night of Ashura with a cart that carries burning torches in a procession. Appanna Jadhav, a Maratha, has been carrying the doli or palanquin for 40 years now.

In Kalaburagi, the story of Hussein is intermingled with that of Pundalika, a local youth who suffered as he neglected his old parents. In Harooru near Chikkodi, Yazid is a local moneylender who harasses farmers. In Mugalkhod in Belagavi, Hazrat Ali, the patron saint of the Garadi Mane (wrestling school), is the younger brother of Hanuman. Images of Hanuman and a tiger symbolising Ali are seen in several villages in the Mumbai-Karnataka region.

“Karnataka’s folk literature has been enriched by Muharram songs. The story of the Prophet’s family and the Battle of Karbala continue to dominate these songs, but their striking feature is their many local elements,” says Chandrappa Hebbalkar, a folk scholar who has edited a book on Muharram songs. “The ballads speak of contemporary issues. The singers have infused their present-day pains into the historical tragedy. They speak as if the Karbala martyrs were born in their own village,” says Arun Joladkudligi, a research scholar at Hampi Kannada University.

“In one village, we were amazed to find Indira Gandhi’s welfare programmes such as widow pensions included in Muharram songs. In Humnabad, I found Riwayat songs on Dr. Ambedkar and the Buddha. A singer in Kalaburagi spoke of a recent tragedy where 20 villagers died in a bus accident. A singer in Bagalkot spoke of farmers who lost lands in the Upper Krishna irrigation project,” says Joladkudligi.

However, there are also instances of young, educated Muslims moving away from Muharram, saying it is a corruption of the original practice, says Shahmbhuling Waldoddi, a teacher in Bidar. “This is because of a puritan view of Muharram taken by some schools like Wahhabi, Tabligh Jamat and Ahle Hadis,” explains Bidar-based writer Yousuf Rahim Mir Bidri. “In several villages, it is not the Hindus who are walking away from Muharram, but young Muslims.” Yet, as Tarikere argues, it is these “non-puritanical practices that strengthen the multicultural basis of society.”

Muharram in north Karnataka has had its share of controversies. In some villages in Kalaburagi, it was stopped when Dalit boys refused to play the drums or clean the Ashur Khana if boys from other castes did not join them. In some villages, the rise of the right wing has reduced the participation of upper-caste Hindus. “But it remains a festival of harmony, with strong participation from Hindus. “In fact,” says Tarikere, “we have documented Muharram celebrated in villages without a single Muslim family.”