Legality, Morality and Politics of Polygamy in Societies 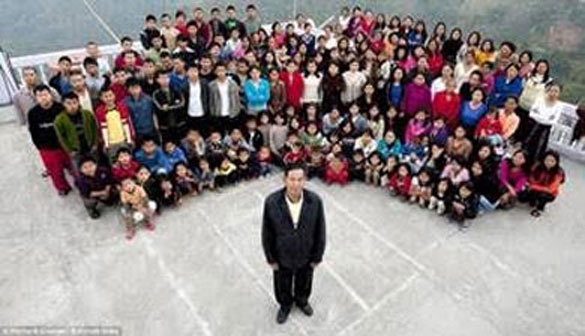 The Ziona Chana family of India in its entirety with all 181 members.

Polyandry, Polygyny and polygamy have all ways been trends in human society. As time progressed and mankind adopted living in bigger and bigger groups forming some kind of cohesive social structure and organizing itself in distinctive societies, different moral and legal concepts and values evolved in terms of sharing the available male and female companionship and associated natural urge for sex and the urge to procreate. These concepts became quiet complex with passing of time.

Fast forward to the age of Religions and its practices, often called religious morality; which added to the complexities and blurred the distinction between moral values and legal imperatives of civilized societies, and the State’s attempt to operate within certain sets of so called universal values and economics. The net result was that, often morality and legality became two distinctly separate but entangled entities. Thus giving rise to the oft quoted statement of the clever manipulators- “It may be immoral but we have done nothing illegal” and so made applicable to most spheres of human activity!

Recently the subject of polygamous marriages among Muslims in the West, practiced covertly in Australia and overtly in the UK was aired in the media:-telegraph.co.uk/culture/tvandradio/11108763/The-Men-with-Many-Wives-the-British-Muslims-who-practise-polygamy.html  where it was asked:-‘ “what makes these people tick” and how a religious group is able to put its own practices above UK law’.

The subject similarly is a constant one for debate both politically and socialy, in Australia. Refer to the excellent article at: mojonews.com.au/polygamy-in-australia-we-offer-everything-from-outrage-to-a-pat-on-the-back/ .

Other religions, sects and cults all over the world advocate marrying multiple wives and even polyandry practices were and are accepted as norm, though not so common now. Not only that but the evolving concept of Human Rights and Equality of gender make both of these practices unacceptable in modern civilized society.

The subject therefore is involved and complex and best left to the academics and philosophers. The only thing worth saying here is that there is no hard and fast ‘philosophy’ attached to it and therefore it cannot be slotted neatly into a “universal” moral value, without some provisos attached to it.

Both in Australia and Europe and particularly in the UK, the Muslim practice of polygyny in the guise of religion aka Islam is a hot topic for politicians in particular. The vexing issue is mainly the “milking” of the social welfare system by the practitioners.  But let us ask the question as to whose fault is it?

In Great Britain, polygamy is only recognised as valid in law in circumstances where the marriage ceremony has been performed in a country whose laws permit polygamy and the parties to the marriage were domiciled there at the time. In addition, immigration rules have generally prevented the formation of polygamous households in this country since 1988.

A Ministry of Justice spokesperson said: “Attempting to legally enter into a polygamous marriage in the UK is a criminal offence which carries a maximum sentence of seven years in prison. Sharia law has no jurisdiction in England and Wales. The Government has no intention of changing this position.”

But as the link shows, the practitioners freely and happily roam your streets! 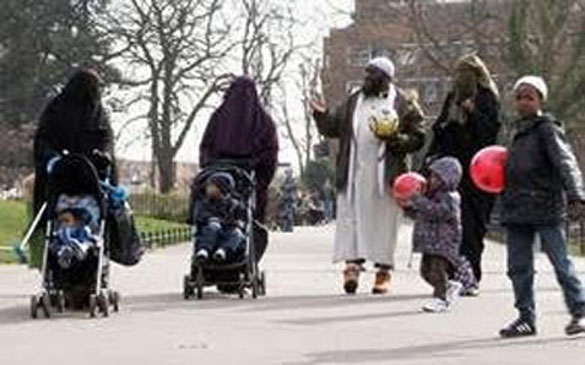 If it was universally accepted “value” that polygamy etcetera is a crime against humanity then why are your laws drafted so vaguely that a truck full of wives can be imported in the country. What stops the UK from unilaterally legislating against the practices of importation of or home grown wives? This is particularly intriguing when as far back as year two thousand the

“United Nations Human Rights Committee reported that polygamy violates the International Covenant on Civil and Political Rights (ICCPR), citing concerns that the lack of "equality of treatment with regard to the right to marry" meant that polygamy, restricted to polygyny in practice, violates the dignity of women and should be outlawed.[119] Specifically, the reports to UN Committees have noted violations of the ICCPR due to these inequalities[120] and reports to the General Assembly of the UN have recommended it be outlawed. [121][122] Many Muslim states are not signatories of the International Covenant on Civil and Political Rights (ICCPR), including Saudi Arabia, United Arab Emirates, Qatar, Malaysia, Brunei, Oman, and South Sudan; therefore the UN treaty doesn't apply to these countries.[123]

The UK is only an extension of the USA in many ways and there it is understood that Polygamy is currently illegal. The UK is not a Muslim country…. or is it?

It is my experience that majority of Muslims in the West look down on polygamy practice and go a step further in branding the innocent children born of these marriages as ‘Bastards and Illegitimate’. This is absolutely unfair on the children and steeped in ignorance. Yet in whichever mode the disgust is expressed, it is of no effect as the religious institutions and their operatives are much more vocal and powerful and clever!

The same can be argued of Australia. But here too the moral waters are as murky as Rio Olympics Swimming Pool of 2016. One can have as many “partners” as one wish and at the State’s expense and no questions asked! Because legislating against the practice would violate some form of freedoms, yet the politically and some might say racially motivated clamor behind the moral disgust is deafening. As far as imposing burden on the taxpayer is concerned, on daily basis it is reported in the media as to how the welfare system is cheated by all sorts of people and in millions of dollars! Muslims ‘single mothers’ of polygamous marriage are not the only experts in this field.

As one former treasurer has suggested as a solution to increase local born population of the country and suggested: ‘one for mum, one for dad and one for the State’. The single mums and their ‘partners’ are therefore fulfilling their duty by allocating all three of them to the State! 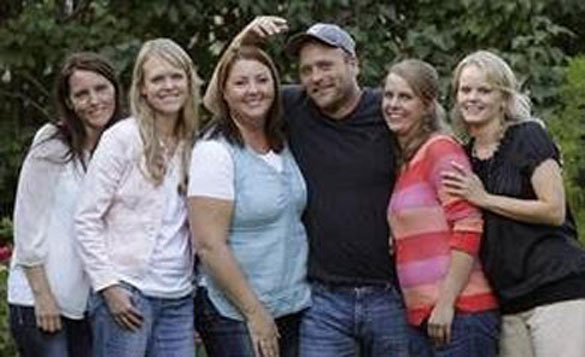 Any number of media coverage has been given to this subject in Australia which the politicians must have watched and read over the years. They should do the right thing about the divisive issue and have the strength to legislate against the abuses that take place behind the religious, cultish, morals and the vague freedom practices by all types of men and women; Muslims and non-Muslims.

To single out one particular ‘people’ who in their ignorance and or vested interests, mint and milk the welfare system through the loopholes of the law of the country, is a reflection on the politician of bias if not outright prejudice against them. The solution required is to take an overall look at the issues regardless of the vague moralistic and pseudo religious practices and come up with even-handed legal solution for the benefit of the country.

First and foremost is to define in legal terms the “single mothers/fathers” an also to tackle the problem at entry point for migrants. It is stupidity to shut the door after the horse has bolted, as the saying goes!