Interfaith Marriages: Love across the Religious Divide Is Powerful and Unifying

The Uttar Pradesh police recently formed a Special Investigation Team to probe inter-faith marriages in Kanpur and crack down on what Hindu nationalists call “love jihad.” 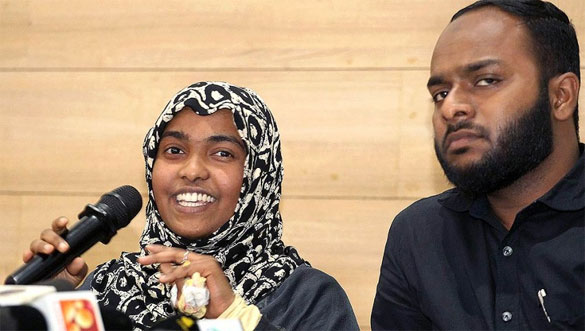 Hadiya alias Akhila Ashokan, the face of the alleged ‘love jihad’ case with her husband Shafin Jahan speaks to media after Supreme Court order in Kerala.

“Love jihad” or alleged efforts by Muslim men to convert unsuspecting women to Islam by force or guile first gained traction in 2009 with purported conversions in Kerala and Karnataka. The Hadiya case of 2016—when a homeopathic medical student’s family from Kerala alleged she was brainwashed and forced into marriage—added fuel to the aggressive polarization campaigns. But now, radical Hindu groups have taken the idea several notches higher.

Last month, Uttar Pradesh chief minister Yogi Adityanath directed senior officials of the state Home Department to prepare a roadmap for tackling “love jihad” cases. He could even bring an ordinance to prevent religious conversions in the name of love. With this political mileage, fringe outfits recently called for a Mahapanchayat in the Baghpat district of Uttar Pradesh after a Hindu woman allegedly eloped with a Muslim man earlier this year.

On social media, images of girls entrapped by “scheming” Muslim men with captions such as “Love Jihad always ends with the death of Hindu girls” and #MuslimsAreJihadi are being peddled widely. Hatemongering websites are spotlighting how “conspiracies” are being hatched by fundamentalists who intend to disrupt Hindu society or how Pakistan is funding these intrigues.

Only recently, the Guwahati High Court lifted a ban on Assamese television serial Begum Jaan after the city police banned it over allegations by Hindu groups that it encouraged “love jihad.”

By fore-fronting these imaginary threats, not only is the naturalness of inter-community love being strangulated, it is also being harnessed to perpetuate religious and political polarization amid the coronavirus pandemic.

Hindu revivalist groups including the Arya Samaj had raked up this issue in the 1920s to deepen religious divisions. But looking back, folklores, mythologies, and anecdotes from ancient India, are rife with how love blossomed in multi-religious mosaics. The religious fluidity allowed for traditions to borrow from each other, and when they were reprimanded, they were seen as acts of heroic defiance. But now, the most punitive agencies are being deployed to redefine the very idea of love.

During my visit to a Hindu nationalist office on the outskirts of Delhi where a saffron-robed female pundit credits herself for rescuing hundreds of “victimized girls”,  this insidious trend hit me right on the face. She had just ended a ritual service to cleanse those who had been brainwashed. As a woman spiritual leader in a male bastion, she took pride in her ability to “shapes women’s minds and empower them.” Those who’ve deviated would always be grateful to her for holding the torch to their misdeeds, she said, after wrapping her spiel on love as it should be.

Amid many reprehensible attempts to determine how people must love, we must not let fade the value of love across the religious divide.

At the outset, inter-faith couples negotiate their religious differences and carry those skills into other aspects of their relationship. While the assumption is that differences are irreconcilable, couples who are in in them often are strengthened, inspired and stirred by their differences.

When couples are in love, it is pretty much that. They possibly have similar goals, worldviews, and spiritual leanings even if their individual religions may preach otherwise. Sometimes a secular person may even decide to pair with a religious partner—a trend reported to be on the rise.

Questions such as how they’ll practice their faith (if they are both religious); will their differences weaken their individual beliefs; how they would relate to their disapproving friends and families; what kind of spiritual nourishment they plan to give their children, are projected as paramount.

But two people need not share the same religion to be wedded to one other. No doubt there are challenges, but those come with any relationship, even ones where the backgrounds are similar. In interfaith pairings, values derive not necessarily from their religious affiliations. The two people ascribe to certain beliefs based on the experiences they’ve had, practices they’ve nurtured or moved away from, or internal transformations that may have shaped their faith trajectories.

It’s easy to embrace the idea of “sacred unions” only if they fit into predetermined moulds. But shouldn’t we be celebrating those who denounce them to chart their own journey of faith?

As the love jihad engine surges ahead and more litmus tests are proposed, we need to remind ourselves that love across the religious divide is powerful, unifying and now,  courageous.

Priyadarshini Sen is an Independent Journalist based in Delhi. She writes for India and US-based media. Views expressed are personal

Original Headline: Inter-Religious Love In the Time of Love Jihad