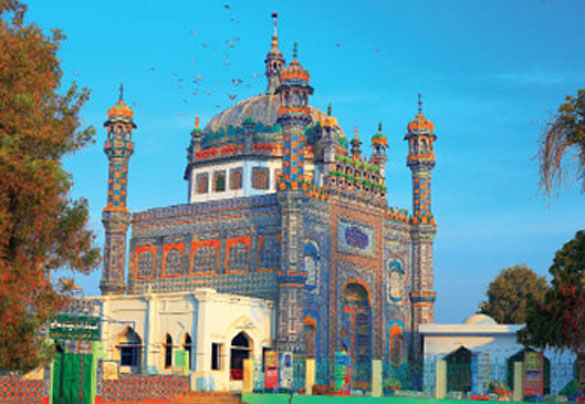 In the once-united Indian subcontinent, Sufi poetry and thought became the blaming influence among different communities and faiths during the Middle Ages. Absorbing the finest tenets of Hinduism and Islam, Sufi spiritual thought touched a chord in the hearts of thousands and offered a world view without any ethnic or community differences. As it grew in various parts of the Punjab and Sindh, the Sufi ethos became the touchstone of peace and understanding between different faiths. Sindh, now one of the four provinces of Pakistan, has always been well-known for the large number of mystics and minstrels who practiced and preached in the subcontinent.

Sufism has been at the heart of the Sindhi identity for both Hindus and Muslims of that area. In fact, Sindh even today has the highest percentage of Hindu residents. Popular folklore has it that 125,000 mystics are buried on Makli Hill, near Thatta, near the apex of the Indus River Delta, the Makli necropolis now a Unesco world heritage site. The name Makli was derived from a pilgrim going into spiritual ecstasy at this point, and declaring the site to be Mecca for him. The place was then hailed as the ‘little Mecca’ and became Makli later.

Popularly known as Jhulelal, Lal Shahbaz Qalandar is regarded as the fountainhead of Sindhi Sufism. The 13th century mystic and scholar, Qalandar travelled widely in Sindh, spreading the message of peace and harmony. Sindhi Hindus believe him to be an incarnation of their patron deity Jhulelal, and the popular Sufi song Dama Dum Mast Qalandar reinforces this connection.

Sufi poetry is further traceable to the seven beits, couplets, of Mamoi saints of the Sindh-Indus region of the 14th to 16th century.

Renowned Sufi poet of the 16th century, Shah Abdul Karim, known for his learning and piety, wrote 92 beits proclaiming the brotherhood of man and the unity of God, which are recited by the devout to this day. Towards the middle of the 17th century, Sindh produced another great Sufi saint, Shah Inayat, popularly known as Shah Inayat of Jhok, and his beits and bol, verses, enthralled the desert. His hymns inspired the people to revolt against the unjust Zamindari system. A God-intoxicated saint, Shah Inayat was persecuted for his views and his execution made him a hero of many a Sindhi legend and folklore.

By the end of the 17th century, there appeared the greatest Sindhi Sufi poet who infused new life and gave new hope to his people. His name was Shah Abdul Latif, meaning the Gracious of the Gracious. Well-versed in Quranic traditions and Vedantic thought, Shah Latif knew seven languages and was called ‘Sufi-e-Haft Zaban’.

Shah Latif’s greatest contribution to Sufi thought were his spiritual sermons which were compiled by his disciples, and are called Shah Jo Risalo, The Message of Shah. Risalo is neither a philosophical treatise nor a literary masterpiece, but it transports readers to new spiritual heights.

Shah Latif was a Sufi poet in the ancient Vedic tradition in which saints and sages possessed nothing and whom nothing possessed except the name of God, the service of the poor and welfare of humanity. He believed that while intellect is bondage, faith is the liberator. While the Ulema learn from books only, the mystics learn from their experience of God-Infinite. Shah Latif liked the company of Hindu saints and visited Hindu centres of pilgrimage. At Dwarka, he danced while reciting the name of Krishna. In spite of his vast erudition, he found comfort in mysticism than in theology.

In the larger framework, Shah Latif was a part of the Bhakti Movement that swept the country from 13th to the 19th century in one form or the other. He adopted the Hindu ritual of ‘shaving the head’ for every new entrant in the Khanqah, the place for gatherings of a Sufi brotherhood, offering sherbet to every visitor. He made no distinction between a Gurukul and a Khanqah, between a Mandir and a Masjid. Shah Jo Risalo is said to have 30 Suras, chapters that are sung like ragas in Indian classical music. They explore the inner restlessness of the soul and the need to anchor this restlessness in God.

Sachal’s tradition was carried on by a number of Hindu Sufi poets, particularly Bhai Chainrai, popularly known as Sami, a name he took on to honour his master, Sami Meghraj. He is the first Sindhi-Vedantic poet who wrote 3,500 Sufi hymns in the form of beits, followed by Bhai Dalpatrai, another Sufi-Vedantic mystic poet, whose poetry is an amalgam of Sufi thought and Advaita Vedanta.

Kabir of the Sindh

Sufi Rohal Faqir was yet another saint who carried on the tradition of his great preceptor Shah Inayat. Local folklore has it that Rohal is the Kabir of the Sindh province. He wrote Bhakti verses in Hindi besides in Sindhi and Saraiki, a western Punjabi-Sindhi dialect, which connoted the language of the immigrants from Baluchistan to Sindh.

Annemarie Schimmel, renowned Sufi scholar, writes on how in Sindh, the borders were never hermetically closed between Islam and Hinduism. She cites ‘Sur Ramkali’ in Shah Abdul Latif’s Risalo, in which the mystic praises the wandering Hindu yogis as seekers of that universal Truth.

Inspiring people to seek the love divine, Sindhi Sufi poetry sent out a powerful message of love, peace and understanding, even as it exhorted the seeker to rise above petty trifles of living and seek out the inner truth that bonds us all together.