“Bhau (father), let’s go, bhau! I want to see how Amjad the Hanuman fights Ravana’s army, for Rama to save Sita ma.”

The year was 1995. I was seven years old. But I remember that time like it was yesterday.

In today’s context of the communal polarisation that characterises our country, fuelled by our 24/7 television news channels, is it possible to imagine a seven-year-old and his friends eagerly waiting to see an Amjad play the role of one of the most revered Hindu gods?

India is rife with religious bigotry. I can’t help comparing the seven-year-old that I was in 1995 with the eight-year-old daughter of a cousin in Mumbai whom I visited recently. As I tried to strike a conversation with my niece, she told me that she hated Muslims. I was taken aback to hear this from an eight-year-old. I asked her why she felt so.

She said, one day at the park, a boy pushed her, so she knew he had to be a Muslim. I asked her how she had reached such a conclusion. The little girl replied that she had read a WhatsApp message about a boy who had pushed a girl, and he happened to be a Muslim, so this boy had to be one as well.

How different her childhood is from mine! In 1995, it was fairly common to hear children in my village, in western Maharashtra, insistently telling their fathers, “Bhau, I want to see how Amjad the Hanuman fights a war for Lord Rama”.

I grew up in a tiny village, Mhaswad, in Satara district. It was located in a drought-prone area and surrounded by grassland, where wolves, hyenas, snakes, and scorpions were a regular sight. The majority of the 5000-odd people in the village were from the Dhangar (shepherd) community, a nomadic tribe. The rest of the village population comprised people from nomadic tribes such as the Ramosi, OBC and Dalit communities.

Ganesh Chaturthi and Eid were my favourite festive holidays – there was delicious sheer khurma to be had on Eid and a treat of plays and skits to be watched during the nine days of Ganesh Chaturthi. Pandals were erected in the village where local theatrical groups – mandals – staged their performance on all nine days of the festival. Whether it was stories from the Mahabharata, the saga of the Taj Mahal or the episode of Hanuman burning Ravana’s Lanka, I loved them all.

In 1995, my favourite play, drawn from the epic Ramayana, was performed by the Golden Ganesh Mandal. The president of the mandal was Amjad, who was about 17 or 18.

The play comprised three episodes – Hanuman going to Ravana’s Lanka and burning it down; Hanuman, unable to identify the sanjeevani herb, uprooting the entire mountain and carrying it on his palm to the battlefield where Lakshamana, hit by Meghnad’s arrow, lies unconscious; and the final war.

Amjad and his team had worked hard to create a set for the half-hour play. They had made mountains out of thermocol and even created a ‘forest’ by  placing eight to nine feet high trees (which had been cut) in the performance arena, securing them with ropes and stones so that they would not shift when someone climbed on them.

That year Amjad outdid himself in the role of Hanuman. The search for Sita in Ravana’s kingdom, accomplished by jumping nimbly from tree to tree, brought the house down. So did the part where he lifted the   mountain – we knew it was made of thermocol, but such was Amjad’s performance that we felt the sheer weight of the mountain that was being carried so that Lakshmana’s life could be saved.  I watched that play every single day for the entire nine days.

My friends and I were beside ourselves with excitement. We shouted ourselves hoarse, encouraging the actor, “Go, Amjad Hanuman, go – lift the mountain, kill the demons!” After the festival was over, I dreamt for weeks about Amjad the Hanuman’s performance. 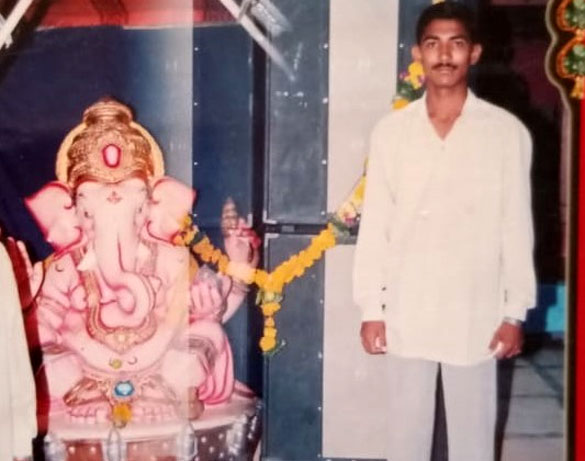 The year Amjad could not take part in a play during Ganesh Chaturthi.

Everyone in the village loved Amjad. He was a star. Once he contracted malaria during Ganesh Chaturthi and could not perform that year. It was the first time in six or seven odd years that he was missing during the festivities. Everyone was terribly upset that Amjad, their hero and the best actor among all the performers at the festival, was out of action.

The entire village made a beeline for Amjad’s house to commiserate with him. Not surprisingly, he was in tears at missing out on his favourite festivities. On the last day of the festival he insisted on coming to the pandal and performing the final prayer before the Visarjan (immersion of the god’s idol in the river).

Amjad would come to our fields to collect durva (grass used on ritual occasions) for the performance of the ritual during the festival. He knew the entire prayer to the god (Ganesha Stotram).

I also have strong memories of how my mother (born in a Jain family), and my father (who hailed from a Hindu OBC community), always wanted us to learn about different religions and cultures. During Eid, we gifted dates to all the Muslim families in our village. 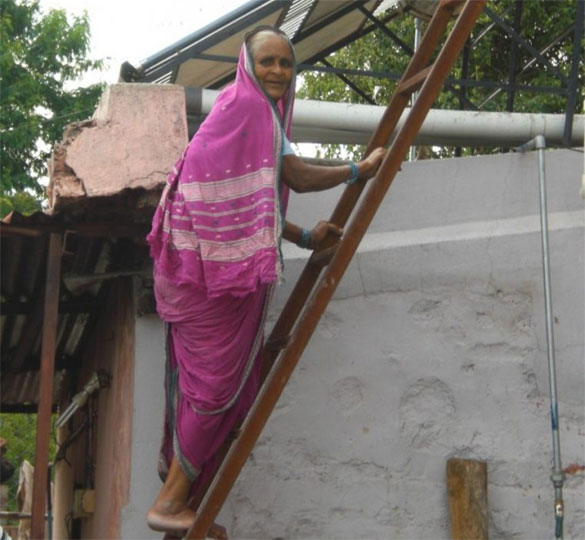 Author Prabhat Sinha’s grandmother, or Akka, at 84, in 2014: a woman of indomitable spirit, and her grandson’s ‘best friend’.

My grandmother, or Akka as she was called, was a single mother and a hardworking farmer. She was my best friend. Akka was a devotee of Lord Shiva and Bali raja. The latter, she believed, was the patron god of farmers, during his reign, farmers were rich and prosperous.

Every Diwali, Akka would fashion an idol of Bali raja from cow dung and pray to it. The person who used to help her make the Bali raja figure was one of my closest childhood friends, Razzak. We were constantly at each other’s homes, partaking of meals and planning the next outing.  My devout grandmother always took him and me to the Shiva temple, where she regularly prayed.

I had no interest in such things. It was Razzak, so curious about the gods, having heard so many stories about them from my grandmother, who invariably pushed me to go. In fact, he was quite familiar with the local Shiva temple and knew its rituals better than I did. Sometimes he would even help my grandmother prepare for her prayers.

Every year, my grandmother, Razzak, and I would pay a visit to the Sufi shrine of the Peer baba of Pulkoti without fail. It was about 5 km away from our village and we would go on foot. I loved going there because the shrine was located on a hill and Razzack and I would race each other down the hill. On the day of the Peer’s urs a wrestling match would be organised by villagers from all communities. 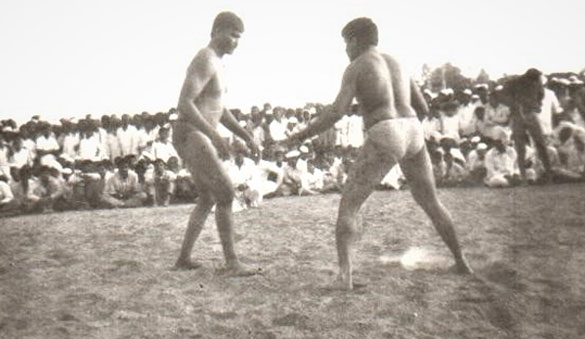 The annual wrestling match organised during the urs of the Sufi Peer baba of Pulkoti.

For years Akka – and one person each from several hundred households (about 20%) – keep a fast either on the first or last day of Ramzan.

That was then. In 2002, I left for the US and pursued my studies there, returning intermittently for varying periods. In 2017, when I came back for good, I realised with a pang that the present is disquieting – in my village as well.

During a recent workshop at the Mann Deshi Champions Youth Development Centre, which I run to train rural girls to compete for employment opportunities in the government sector, such as the police force, I had invited a historian from an American university to hold a zoom session (in the time of COVID-19) to speak about the rich history of India. In the course of his talk the speaker happened to refer to the unique element that the Mughals lent to India’s architectural traditions. He mentioned the Taj Mahal as a vibrant example.

When he concluded his session one of the students at the Centre stood up and asked, “Why don’t the Muslims of India go back to their country?”.

I was stunned, but not surprised. The student’s question reflected not a personal bias but our collective failure to free our children’s hearts and minds of such prejudices. 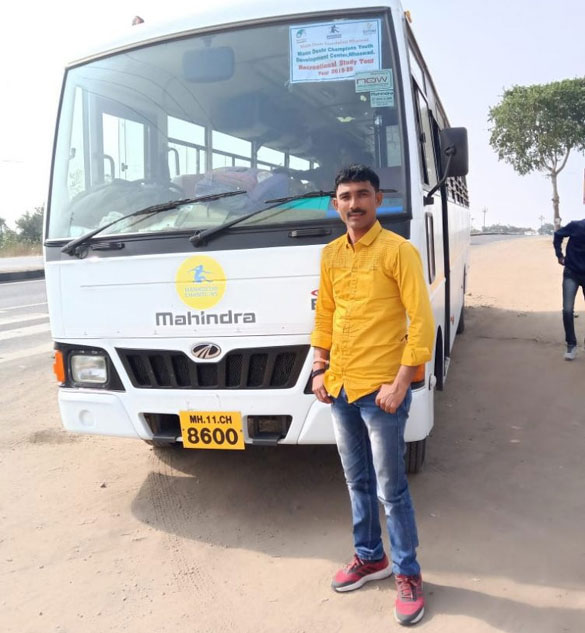 Amjad the Hanuman, now in his early 40s.

Meanwhile, I take solace in the fact that Amjad, the Hanuman of my childhood dreams, is a hero in the real world too. In his early 40s now, every day he drives the Mann Deshi Champions bus, a facility we provide to ensure that no girl misses her classes at the Centre for reasons of safety or the cost incurred at having to reach the Centre.

Much like Hanuman, who helped Lord Rama reach his goal, Amjad, in his own way, is helping these girls get closer to achieving their dreams. The young girl who asked the guest speaker the question is one of them, as is his daughter Alafia, who aspires to become a police officer.

According to mythology, good always prevails over evil. However, our fight against community stereotypes, based on virulent religious prejudices, and discrimination is far from over.

Only when it becomes the most normal thing once again for a child to say, “Let’s go, Bhau, I want to see how Amjad the Hanuman fights Ravana’s army”, and for a present-day Prabhat and Razzack to share a universe unclouded by communal hatred, will this fight be over.

Prabhat Sinha, a former athlete, is a sports agent and a honey hunter. He runs a sports programme for rural and tribal children of Maharashtra, Manndeshi champions, and hopes that his proteges will represent India in 2024 Paris Olympics.