Pope Francis reached out in friendship to "so many Muslim brothers and sisters" during a Good Friday procession dedicated to the suffering of Christians from terrorism, war and religious fanaticism in the Middle East.

The new pontiff, who has rankled traditionalists by rejecting many trappings of his office, mostly stuck to the traditional script during the night-time Way of the Cross procession at Rome's Colosseum, one of the most dramatic rituals of Holy Week. 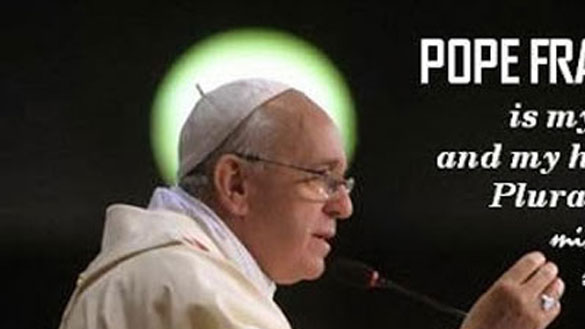 With torches lighting the way, the faithful carried a cross to different stations, where meditations and prayers were read out recalling the final hours of Jesus' life and his crucifixion.

This year, the prayers were composed by young Lebanese, and many recalled the plight of minority Christians in the region, where wars have forced thousands to flee their homelands. The meditations called for an end to "violent fundamentalism," terrorism and the "wars and violence which in our days devastate various countries in the Middle East."

Francis, who became pope just over two weeks ago, chose, however, to stress Christians' positive relations with Muslims in the region in his brief comments at the end of the ceremony.

Standing on a platform overlooking the procession route, Francis recalled Benedict XVI's 2012 visit to Lebanon when "we saw the beauty and the strong bond of communion joining Christians together in that land and the friendship of our Muslim brothers and sisters and so many others."

"That occasion was a sign to the Middle East and to the whole world, a sign of hope," he said.

Friday's outreach followed Francis' eyebrow-raising gesture a day earlier, when he washed and kissed the feet of two women, one a Muslim, in the Holy Thursday ritual that commemorates Jesus' washing of his apostles' feet during the Last Supper before his crucifixion.

Breaking with tradition, Francis performed the ritual on 12 inmates at a juvenile detention centre, rather than in Rome's grand St. John Lateran basilica, where in the past, 12 priests have been chosen to represent Jesus' disciples.

Before he became pope, the former Cardinal Jorge Mario Bergoglio long cultivated warm relations with Muslim leaders in his native Argentina. In one of his first speeches as pope, he called for the church and the West in general to "intensify" relations with the Muslim world.

The Vatican's relations with Islam hit several bumps during Benedict XVI's papacy, when he outraged Muslims with a 2006 speech quoting a Byzantine emperor as saying some of Prophet Muhammad's teachings were "evil and inhuman." And in 2011, the pre-eminent institute of Islamic learning in the Sunni Muslim world, Cairo's Al-Azhar institute, froze dialogue with the Vatican to protest Benedict's call for greater protection of Christians in Egypt.

However, Francis' past outreach to the Muslim community in Argentina seems to have changed that. Al-Azhar's chief imam, Sheik Ahmed el-Tayyib, sent a message of congratulations to Francis on his election and said he hoped for cooperation.

The Vatican's efforts to reconcile with the Islamic world have not been welcomed by all. Italy's most famous Muslim convert to Catholicism, Magdi Allam, announced last week he was leaving the church because of its "soft" stance on Islam. Allam was baptized by Benedict XVI in 2008 during the high-profile Easter Vigil service when the pope traditionally baptizes a handful of adults. There has been no Vatican comment on his about-face.

Thousands of people packed the Colosseum and surrounding areas for the night time procession, holding candles wrapped in paper globes as Francis sat in silent prayer as a giant torch-lit crucifix twinkled nearby. Some in the crowd had Lebanese flags around their shoulders in an indication of the special role Lebanese faithful played in this year's procession.

Lebanon has the largest percentage of Christians in the Middle East — nearly 40 percent of the country's 4 million people, with Maronite Catholics the largest sect. As civil war has raged in neighbouring Syria, Lebanon's Christian community has been divided between supporters and opponents of Syrian President Bashar Assad.

Overall, Christians in the Middle East have been uneasy as the Arab Spring has led to the strengthening of Islamist groups in most countries that have experienced uprisings. Thousands of Christians have fled the region — a phenomenon that the Vatican has lamented, given Christianity's roots in the Holy Land.

"How sad it is to see this blessed land suffer in its children, who relentlessly tear one another to pieces and die!" said one of the Good Friday meditations. "It seems that nothing can overcome evil, terrorism, murder and hatred."

Francis picked up on that message, saying Christ's death on the cross is "the answer which Christians offer in the face of evil, the evil that continues to work in us and around us."

"Christians must respond to evil with good, taking the cross upon themselves as Jesus did, &qut; he said.

At the end of the ceremony, a male choir sang a haunting Arabic hymn, a reflection of the Eastern rite influence that infused the ceremony.

On Saturday, Francis presides over the solemn Easter Vigil ceremony in St. Peter's Basilica and on Sunday, he celebrates Easter Mass and delivers an important speech. Usually the pope also issues Easter greetings in dozens of languages.

In his two weeks as pope, Francis' discomfort with speaking in any language other than Italian has become apparent. The Vatican spokesman, the Rev. Federico Lombardi, said Friday "we'll have to see" what Francis does with the multilingual greetings.

The Good Friday procession was conducted entirely in Italian, whereas in years past the core elements recounting what happens at each station would be recited in a variety of languages.