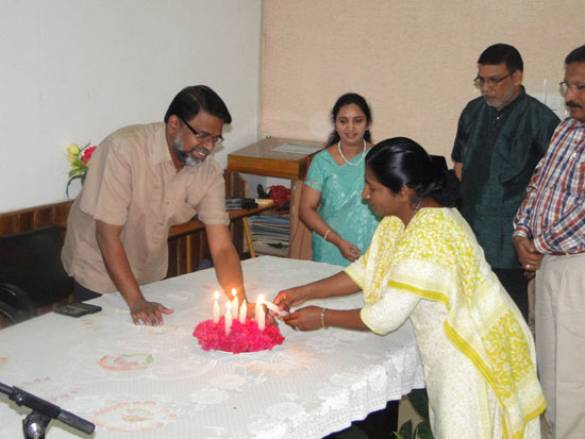 One of the baffling challenges that the adherents of the world religions face today is that of inter-faith relations in general and Muslim-Christian ties in particular. Given the history of intense conflicts and grave atrocities perpetrated by extremists of both communities, the adherents of the two largest religions of the world are laden with the burden of harsh memories. While the history witnessed the bitter reality of the Crusades, the present plight of Christians in many parts of the Muslim world continues to create misconceptions about Islam in the minds of many Christians. In such an environment which actually seems to promote division, a two-week international workshop on “Islam and Interfaith Relations” came up with glad tidings to the mainstream peace-loving Muslims and Christians. The event was organized by Henry Martyn Institute (Hyderabad) at Shillong (Meghalaya), from the 4th to the 17th of May, 2014. 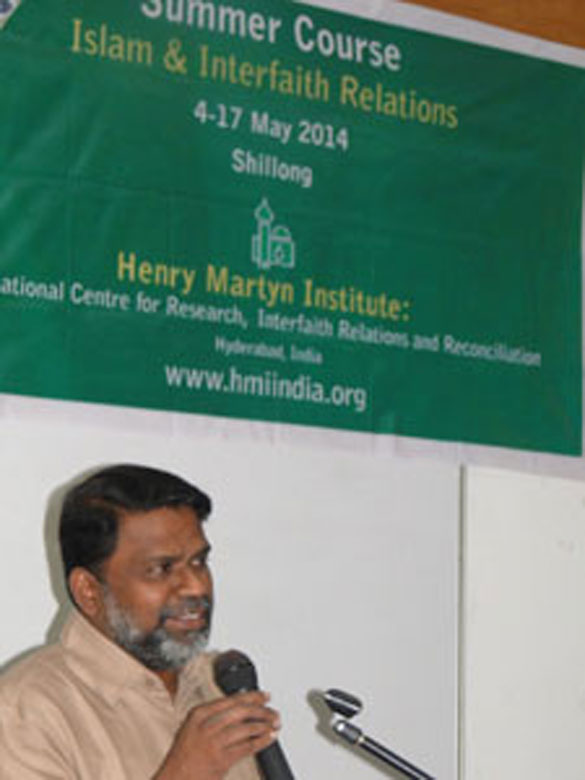 The course on “Islam and Interfaith Relations” included an intensive introduction to Islamic beliefs, doctrines and practical guidelines for how to relate to people of other faiths and an introduction to conflict resolution as a way to promote reconciliation.  This study of Islam and interfaith relations was an important part of pastoral training, particularly in light of the present context of communal divisions on destructive lines. The course focused on communal harmony in India and the growing need for understanding of Muslim neighbors so that the two largest communities of the world may help to build bridges of understanding and cooperation the world over.

Henry Martyn Institute, an International Centre for Research, Interfaith Relations and Reconciliation (HMI), is an ecumenical Christian organisation, dedicated to the objective study and teaching of religions, the promotion of interfaith relations and reconciliation. Since its inception in 1930, HMI has established a long record of peace-building and promotion of interfaith harmony through the academic programmes, international workshops and residential courses  focused on Islamic studies, interfaith relations and peace-making. Taking into account the growing importance of the multi-culturalism and religious diversity, the HMI also helps the students and scholars with a bird’s eye view of major religions like Hinduism, Islam, Christianity, Buddhism etc. 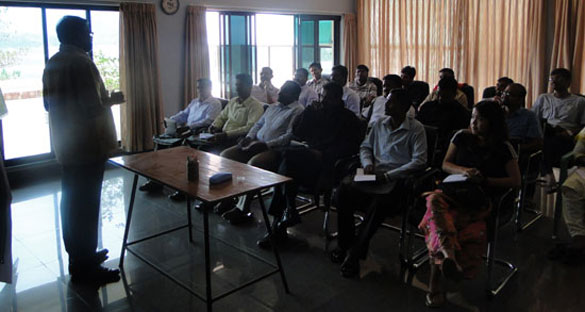 The Summer Course on Islam and Interfaith Relations, a long-standing annual programme of HMI, which was an intensive two-week residential workshop— provided the priests, bishops, pastors, students and scholars educated in Christian seminaries, with great deal of time to examine and deepen the knowledge about the essential messages as well as the most vital contemporary issues and concerns of Islam and Muslims. They were exposed to the real meaning of relationship between people of different faiths. A deeper analysis of pluralism, co-existence, interreligious harmony and interfaith dialogue was envisaged.

The course was divided into two levels as the following: 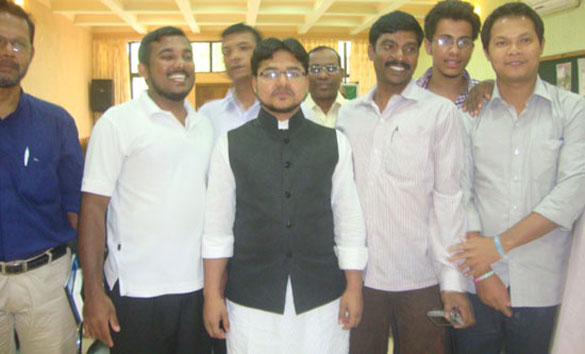 Mr. Ghulam Rasool Dehlvi Along With a Group Of Christian Research Scholars And Students

The course was open to people of all faiths, and to students and scholars of both religious seminaries and secular universities. Most notably, priests, chaplains, pastors and religious and community leaders of the Christian societies in different parts of India got enrolled in the course on Islam and Interfaith relations. There were approximately 30 participants each for the Introductory and advanced levels.

The participants followed an intensive two-week programme consisting of lectures and presentations; group discussions, role plays, cultural events and practical dialogue sessions; readings, videos, and visits to local religious places. Upon successful completion of the course each participant received a certificate from HMI.

The participants told the New Age Islam correspondent that they had plethora of doubts and misconceptions about Islam and Muslims, which came to an end upon the completion of the workshop. “Considering the present stereotyped images of Muslims the world over, I had developed so many wrong perceptions and negative impressions about Islam. But after I joined the workshop, I came to realise that there is world of difference between the real Islam and misrepresentation of Muslims”, says Alan Varghese, one of the participants from a Christian seminary.

Richi Thomas, a Christian seminary student from Singapore, told the New Age Islam correspondent that the event gave him an insight into the core values of peace and harmony deeply embedded in the holy Qur’an. He said that the successful completion of his summer course on Islam caused his eagerness to do his PHD in Islamic studies.”

The event was truly delightful and quite an ennobling experience for the faculties and resource persons as well, who belonged to major religious confessions such as Islam, Christianity, Hinduism and others. The faculties for different subjects related to the course were:

The Topics Discussed By The Above-Mentioned Faculties In Their Sessions Were:

(5) Method for the study of Religion (by AK-Mr. Abdul Kareem)

(22) The clash of Civilizations (by Dr. Deepali Bhanot) 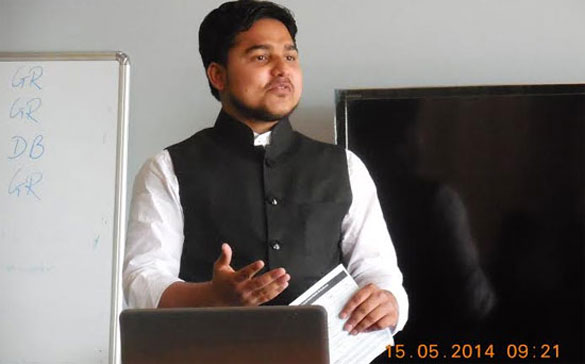 The regular contributor of New Age Islam, Mr. Ghulam Rasool Dehlvi, who delivered his talks consecutively for five days on the above-mentioned topics, primarily focused on common grounds enshrined in the holy Quran and Biblical scriptures. Stressing the need of interfaith dialogue, he said:

“By and large, Catholic-Muslim relations have been quite peaceful throughout the ages. But, we need to open more opportunities and avenues. Our schools and colleges should be gateways to dialogue. We ought to ensure that Muslims build brotherly bonds with the Christians and develop more amicable feelings for people of all religions. He continued: “The Holy Quran reiterates: “… and nearest among them in love to the believers will you find those who say, ‘We are Christians, because amongst these are men devoted to learning and men who have renounced the world, and they are not arrogant” (5:82).

He explained that the appreciation of the Muslims is not because they merely called themselves Christians, but because they were such a sincere Christian community that they appreciated Muslim virtues, as did the Abyssinians to whom the first Muslim migrants went, during the persecution by the pagans of Mecca in 615 AD.

The Prophet’s companion Hazrat Abu Hurayrah reported Allah’s messenger as saying: "I am akin to the son of Mary among the whole of mankind and though prophets are of different mothers, they all are of one religion, and no prophet was raised between me and him (Jesus pbuh)".

He further elaborated that “Jesus Christ was both Prophet (Nabi) and Apostle (Rasool) according to Islam. So, given his prophetic position highly elevated in Islam, it is important that both Muslims and Christian brethren know how well Islam speaks of Jesus Christ. It will help both Christians and Muslims develop mutual respect and enhance spiritual ties between them”, he concluded.

A Brainstorming Session by the Christian Students

Speaking on “Islamic Educational System”, Ms. Mamdooha Majid, a woman member of All India Muslim Personal Law Board, said that “the first thing taught to a child in Islam is “read in the name of God”; therefore one cannot say that Islam is a religion of illiteracy or ignorance.

She said that the open and friendly environment created by the Christians was a learning experience for Muslims like her. The Christian students and scholars, she said, were very open and frank in asking even the most sensitive questions. “They did not hesitate to put forward the questions like: Why Women are degraded in the Muslim society. But I made it clear that many things that non-Muslim women take as subjugation, compulsion, or degradation such as wearing scarf or veil are not at all problematic for many Muslim women, so it should be left to their discretion to wear or not to wear Hijab”, she said.

Offering answer to the question as to why God had to send Prophet Muhammad (pbuh) after the Jesus paid the penalty for every sin that has ever been committed, Ms. Mamdooha Majid said that the chaos and disorder prevailing in the pre-Islamic world of ignorance caused the advent of Prophet Muhammad (peace be upon him).

Answering the question as to why the holy Quran was not changed into any other language rather than Arabic, like the Bible which was transformed from its original language, Hebrew, to the Latin languages, she stated that the holy Quran has always been translated and not converted into other languages for the sole reason of preserving the original texts of the Quran.

She was all praise for her Christian students. She said: “all my Christian students were so happy, agile, fun-loving, and very kind and respectful to me. Some of them even touched my feet in veneration, when I set out to my home”.

Veteran journalist and well-renowned academician and expert on Islam and other religions, Mr. Yoginder Sikand discussed a great number of topics such as Muslim education, Indian Muslims’ socio-economic conditions, Israel/Palestine issue etc. He particularly engaged with the regular group discussions which were held every afternoon bringing together scholars and students, priests and faculties and resource persons.

By offering such extensive summer courses combined with fascinating cultural events, Henry Martin Institute, aims at fostering an atmosphere of peace and harmony in the country and removing doom and gloom made of religious bias, communal hatred, hostile attitude and mistreatment meted out to people of other religious communities. Though it is an uphill task, the HMI is seems to be committed and spirited in its efforts of spreading messages of love, peace and inclusiveness in the framework of religions.