Islamist Terrorism Is A Conspiracy Of Jews And Christians Against Muslims And Islam; Taliban Are Not A Terrorist Organization, According To An Urdu Daily Ekhbar e Mashriq

Muslims blame the Jews, the Americans and other ‘Dushman-e-Islam’ for all their problems which they themselves pose. One of them is terrorism which is a product of their extremist and radical interpretations of the Quran and Hadith. But while talking about terrorism, Muslims intellectuals, journalists and columnists pretend to be unaware of these interpretations and their hardcore ‘ulema’ and blame terrorism on the enemies of Islam and call it a conspiracy against Muslims. 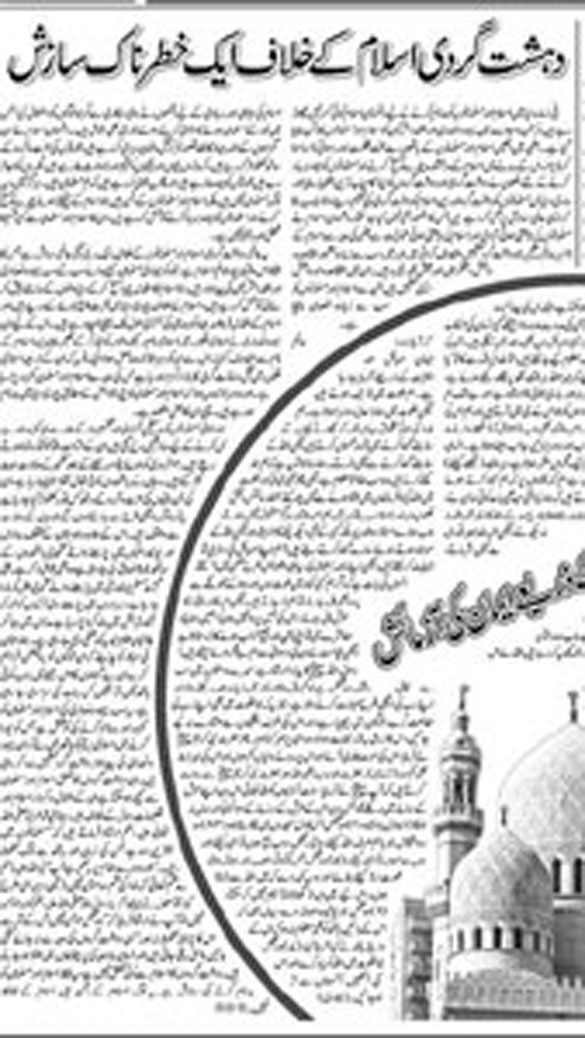 “This world terrorism is a world conspiracy against Muslims and Islam which has affected the entire Muslim community of the world. All these people calling themselves Jihadi Muslims are a product of the Yahud-o-Nasara (Jews and Christians) and violent polytheists who are presenting a wrong image of Islam before the world. They are sowing the seeds of hatred against Islam and maligning the sacred practice of jihad. For this purpose the Jews and Christians prepared people with Islamic names in Islamic countries and introduced them as fighters of Islam. This gave them two-fold benefits. One, because of them, violence and bloodshed have been spread in Muslim countries and two, Islam and Muslims have been maligned in the entire world. This is their purpose.”

Zakir Naik, the popular preacher defended suicide bombings calling it permissible in Islam. This is the position of many other so-called ulema. This mindset has not changed even after the exposure of the ISIS and its un-Islamic practices. Some of them have now started calling ISIS a terrorist organization only after the government banned it and they have been destroyed in Syria.