Conversion of Hagia Sophia And the Eclectic Side of Islam

A Turkish court’s ruling that the popular Hagia Sophia museum in Istanbul would now be turned into a mosque has evoked mixed responses the world over. The Pope has expressed “pain” at this decision while Turkish President Recep Tayyip Erdogan is ecstatic. Those whose hearts beat not just for cultural history and heritage but also for the other, eclectic side of Islam that found expression during the time of reformist leader, Kemal Ataturk, are worried about whether Hagia Sophia will continue to be accessible to people of all faiths and cultures. 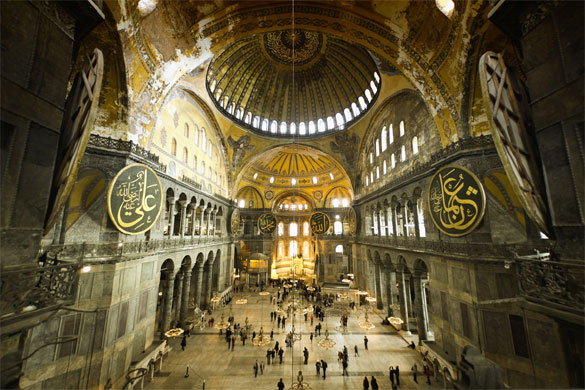 I was in Istanbul in the year 2007, a stopover from Cairo to Delhi, after witnessing Pharaoh Hatshepsut’s mummy being unveiled to the public for the very first time. My colleague and I, eager to do the rounds of the touristy but heritage-rich destinations in Istanbul, first headed to the famous Sirkeci Train Station built in 1889, where a waiting room gets transformed into a makeshift Sema Chamber, as Mevlevi dervishes, chanters and musicians give us a taste of the renowned whirling Sufi prayer ritual. Topkapi palace and museum, a short trip on the Bosphorus, the Blue Mosque, and of course, the inevitable Santa Sophia just across from the Blue Mosque.

Mevlevi Jalaluddin Rumi’s words resound across Platform No. 1 as a train comes charging in: “If you entered the Sema you will leave both worlds:/ the world of the Sema is outside both worlds.”

Outside, the choppy waters of the brilliant-blue Bosphorus, seemed to simulate the city’s disjointed but interesting past. Istanbul’s Byzantine, Roman and Ottoman infusions and Christian, Islamic, Jewish, and secular influences make it the favoured destination of millions. That it is the only city in the world to straddle two continents geographically is aptly symbolic of the coexistence and even integration of western and eastern persuasions.

Declared a world heritage site by Unesco, the Hagia Sophia was originally built as a church by Byzantine emperor Justinian and it remained so for 900 years. The Ottomans converted the church into a mosque, leaving undisturbed, the exquisite mosaics depicting nativity scenes. They simply covered them with thick plaster, decorating the fresh base with intricate geometric patterns so typical of Islamic art. (Depiction of animal or human images is not permitted in Islam.) In 1935, during Ataturk’s time, the Hagia Sophia was turned into a secular museum. The plaster had given way in several places to reveal the beautiful Christian artwork, and the administrators let this be so that visitors could experience what was hidden behind layers of history.

Those who thronged Hagia Sophia came from diverse faiths and traditions – Christian, Muslim, Hindu, Atheist, Sikh, Agnostic, Jewish, Humanist – and interestingly, one could see some of them, whatever their faith, offering short prayers or simply communicating gratitude to an Entity that was perhaps being perceived as the inspiration for this beautiful piece of creation. A lovely building, embellished with Christian and Islamic architectural features, it had been turned into a secular museum without disturbing its checkered past so that visitors could experience it all.

But that is also now becoming part of history, once again. Will everyone be given access to the Hagia Sophia that will now function as a mosque? Will UNESCO take away its status as a world heritage site? Only time will tell …

Original Headline: The other, Eclectic side of Islam