Marrying Non-Muslims: In Interfaith Marriages the Proselytization Process Should Be Stopped

Scholars Like Maulana Manazir Ahsan Geelani And Shams Naveed Usmani Have Articulated The Scope Of Ahle Kitab To Buddhists And Hindus Too; They Believe That Such Large Number Of People And Region Cannot Be Bereft Of The Prophets Of God

2.    The process of conversion for marriage should be debarred and discouraged

3.    Interfaith marriages should be registered in local courts instead of being solemnized according to religious rituals 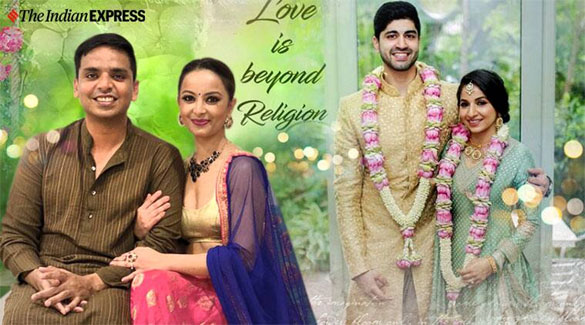 Marriage is a sacred institution in Islam. So is the case with most religions. They lay down specific conditions about marriage. The rights, obligations and duties are enshrined specifically for the spouses who enter into the serene bond of marriage. In Islam after specific conditions have been met by both partners and families marriage is solemnized. Then there are specific guidelines for both husband and wife. Later on if disputes arise, the process of resolving them is enumerated too, so is the fact of divorce to end the marriage. If the reconciliation between the spouses fail, then divorce becomes inevitable. This is quite a normal process of marriage, its outcome or end.

In South Asia, problems arise if there are interfaith marriages. For some groups Muslim men are targeting young Hindu women, making them fall in love with them and then converting them to Islam after marrying them. So this whole process has been termed as Love Jihad, a term whose origins remain unknown. Love Jihad has been used to reinforce Islamophobia in India. In Pakistan, the Hindu minority regularly alleges that Muslim men abduct Hindu girls, convert them under coercion to Islam and then they are married off to Muslims, who then give birth and raise Muslim children. Similar is the cases in other countries where Muslims allege that non-Muslims abduct their women, convert and marry them.

Marriage is something that used to take place within the members of certain community and religion. It was based more on specific caste, regional and religious lines in South Asia. These factors still constitute a norm in South Asia, but due to modern means of communication, more interaction among opposite genders through education and economic factors, inter caste, faith and regional marriages are increasing in frequency. But these marriages mostly lead to backlashes and repercussions. Sometimes the spouses are killed and these killings are carried by their respective families in the name of saving honour. At other times, whole families and communities are targeted by the aggrieved communities. Now few states in India have brought laws against conversion and interfaith marriages.

The Quran espouses Muslims to marry pious men and women. “Good women are for good men and good men are for good women.” (Al Quran 24:26) Similarly Quran permits Muslim men to marry women of the book (Ahle Kitab) meaning Jews and Christians (Al Quran 5:5). In India, some scholars like Maulana Manazir Ahsan Geelani and Shams Naveed Usmani have articulated the scope of Ahle Kitab to Buddhists and Hindus too. They believe that such large number of people and region cannot be bereft of the Prophets of God. So Mahatma Gautam Buddha and Bhagwan Ram/Krishna can be Prophets of God. So their followers certainly constitute people of book. Hence, Muslim men when they fall in love with Hindu women, utilize this specific minority opinion to marry Hindu women. But then they mostly convert them to Islam, because only then the Nikah will have religious sanctity because the Qazi or Mufti who solemnizes the Nikah does not believe or may not have heard about Hindus being Ahle Kitab. So she has to convert. The Muslims also rejoice that they have added another member to their community. This number game among Muslims has its own specific roots. They prefer quantity over quality.

The marriage with Ahle Kitab (Jews and Christians) too in South Asia is solemnized by converting them. Although, Quran does not go into specifics about how the marriage is to be solemnized, between Muslims and people of the book, but certainly the need to convert them is not emphasized, although worshipping and praying in their manner is abhorred as they associate partners with God. Now for many scholars and theologians, this order was specific to Ahle Kitab who existed during the time of Prophet Muhammad (pbuh) and the time of revelation of Quran, but now the circumstances and religion of Ahle Kitaab has changed too much that it is not advisable to marry Ahle Kitab women.

For Muslim women it is a categorical denial to marry any man who is not a Muslim (Al Quran 2:222). Islam does not hold such a marriage valid. Further, the Muslim community too gets angry when a Muslim woman marries a Hindu man, exposing the double standards of the community, who have different parameters to judge between men and women marrying outside the Muslim community. So marriage, particularly the interfaith one is condemned and deeply abhorred, if it involves a Muslim woman. Islam believes that man as a head of family will transfer his religious values to the children, so if he takes a non-Muslim wife, it is not a problem. Further, man being head of the family and controlling women particularly the wife will definitely not let her religious beliefs and values be transmitted in family and children. Islam gives sanction to such marriages, although finer details are not deliberated about the beliefs of children, divorce process and how to resolve conflicts if they arose in such a marriage.

The interfaith marriages according to some scholars need to be abhorred because now even the Ahle Kitab has deviated from the correct path. Then the marriage where Muslim men elope with non-Muslim women and later convert them should be desisted too. Also if any Muslim or non-Muslim is involved in an affair that will lead to marriage, then there should be no compulsion for conversion or proselytization. Islam debars any type of clandestine affairs between opposite genders except for marriage. The private secret intimacy with the opposite gender is condemned in unequivocal terms. So for Islam the norm is arranged marriage and spouses are supposed to fall in love post marriage.

So in a love marriage, the very act of love is not encouraged, so is not the conversion. If Muslims and non-Muslims marry they should not convert each other for the sake of getting married, instead marry in an open court and get their marriage registered. This will resolve the issue of love Jihad and other such issues arising from these marriages. Why should religion be invoked at the time of marriage, when it was out of equation completely when the couple fell in love? Also later the children born out of this wedlock should have the choice to adopt any religion instead of imposing a certain version of religion. Only then the issues arising from such marriages will be resolved. Muslims too need to come out of the proselytizing mind-set because they think it as a moral duty to convert others. It is an obligation to present Islam before non-Muslims but just increasing numbers is never an aim of Islam. So in interfaith marriages the proselytization process should be stopped.

A New Age Islam columnist, M.H.A. Sikander is Writer-Activist based in Srinagar, Kashmir