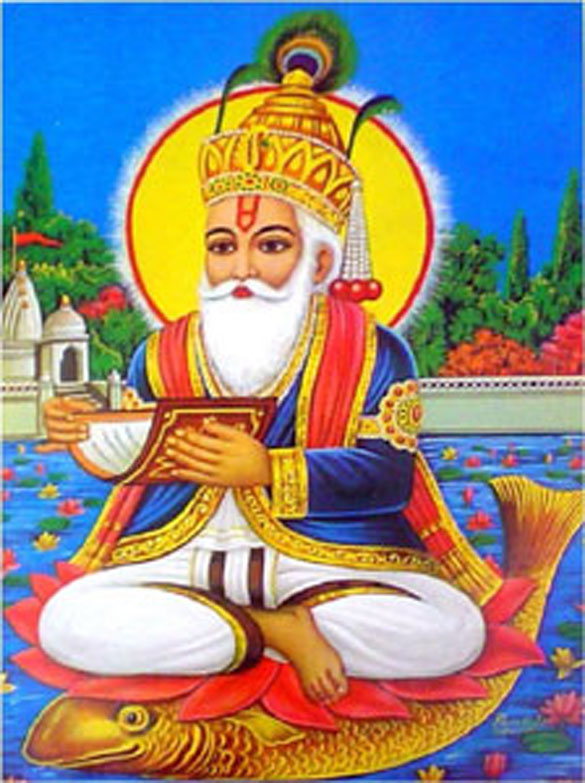 Sufi saint and Hindu deity ‘Jhulelal’ is symbolised as a source of interfaith harmony in Sindh. PHOTO FILE

Celebrating the rich and varied cultural heritage of the Hindu community in Sindh on the eve of Diwali, Alliance Francaise de Karachi, the Centre for South Asian Studies (CNRS, Paris) and the University of Karachi’s (KU) Centre for Social Sciences organised a seminar, ‘The Multiple Identities of Jhulelal And Other Case Studies’, focusing on the Jhulelal – a sacred figure for interfaith harmony that is worshipped by Muslims and Hindus in Pakistan and India, especially in Sindh.

The seminar was part of the Udero Lal Research Project (ULRP) that explores the religious traditions that exist among the followers of the 18th century Jhulelal, investigating the secular and sacred faces of Sindhi culture and identity called ‘Sindhiyat’, which faces challenges of transformations due to colonisation, partition and displacement.

Archaeology And Architecture Of Jhulelal

KU’s Humera Naz chaired the first session of the seminar exploring the shared archaeological importance and anthropological legacy of the Jhulelal tradition in Sindh.

State Bank of Pakistan Museum and Art Gallery Department Director Asma Ibrahim briefed the audience about a two-year project from 2015-17 of rehabilitation and conservation undertaken by the Sindh Exploration and Adventure Society (SEAS) as part of a US government-funded project for the renovation and rehabilitation of the Shri Varun Dev Mandir in Manora.

According to Ibrahim, Shri Varun Dev Mandir existed in a dilapidated state with much of the temple’s complex abandoned, neglected and weathering for the last 60 years. The temple was sealed by the government to protect it following the destruction of Babri Masjid in 1992.

She said that the rehabilitation plan was implemented to address the years of structural damage, vandalism and natural weathering of the Mandap dome, columns, deities and Sakhara of the entire temple complex and end the isolation of the temple to promote cultural tourism and establish interfaith harmony.

“Our project has not only been able to restore the main temple at Manora, but the Shiv Mandir, Gurdwara and Yousuf Pir’s Mazar [shrine] – all of which signify the importance of interfaith harmony for the local communities – were also restored,” she said. However, Ibrahim said it is sad to see the south-east corner of the temple remains encroached by a canteen [after restoration].

Architect Syed Haider Raza Zaidi shared his experience of renovation work for the Dharya Lal Mandir near the Karachi Port Trust building, where a project funded by the government of Sindh and members of the local Hindu community renovated the Jhulelal Mandir in less than three months at a cost of only Rs1.5 million.

Zaidi stressed the importance of encouraging interfaith harmony among local communities in Karachi.

NED University of Engineering and Technology’s Professor Masooma Shakir shared her findings of how the 16th century joint Muslim-Hindu shrine complex at Udero Lal, near the city of Tando Adam Khan, dedicated to Saint Sheikh Tahir for Muslims and Lord Jhulelal for the Hindus has a unique architectural history.

An all-white painted shrine complex that has largely been inspired by the Central Asian architecture, ‘Caravanserai’, the Udero Lal shrine is a symbol of interfaith harmony. These were mostly built by traders in Central Asia as a roadside inn where travellers could rest and recover from the day’s journey and are rarely seen in the Indian subcontinent.

Shakir said the Sindhi Hindu community pays reverence by celebrating ‘Chetichand’ on the eve of Hindu New Year which signifies as the day of birth for Jhulelal, who is associated with water [the source of life] and is considered a savior, especially for those who travelled by sea or River Indus.

“Jhulelal never disclosed which faith he belonged to. The Hindu and Muslim followers of Jhulelal continue the tradition of religious co-existence at one shrine, where the holy flame has been burning for over 400 years now,” she added.

Greenwich University’s Mohan Devraj Thontya chaired the second session with French researcher Michel Boivin, who has done considerable research focusing on societies and cultures of the Sindhi-speaking area, to discuss the authority and social hierarchy in Jhulelal’s path.

According to Boivin, Sindh is rich in culture since it is related to the River Indus, but after partition and the displacement of millions of Hindus from Sindh we saw the first of the Jhulelal temples emerge in India.

Boivin said there exist two orthodox narratives attributed to Jhulelal – one of the Hindus and the other of the Muslims. For Sindhi Hindus, Jhulelal is a name that refers to the Ishta Dev, who is regarded as an incarnation of the Hindu deity Varuna.