Hagia Sophia Conversion Is Celebrated by Islamists And Condemned By UNESCO, The European Union and Archbishops

This Friday, Istanbul's Hagia Sophia will become a venue for Muslim prayers for the first time in almost a century. I do not intend to pray there. As a Muslim, it is against my religious beliefs to forcibly convert another religion's holy place for my own use. This might not bother the political Islamists who support the move, but it is a principle that Islam has been committed to for 1,400 years.

Constructed as a church in the year 360 AD during the reign of Roman Emperor Constantine II, it was converted to a museum in 1934, as a way to make it an inclusive space that can serve, like Istanbul itself, as a bridge between continents and civilizations.

But all this has been destroyed in a populist move that is an attack not only on the rights of Christians but also the right of moderate Muslims to live in harmony with those of other faiths. The Mosque conversion has been celebrated only by extremist Islamists (including Hamas), and condemned by almost everyone else, including UNESCO, the European Union and Archbishops around the world. 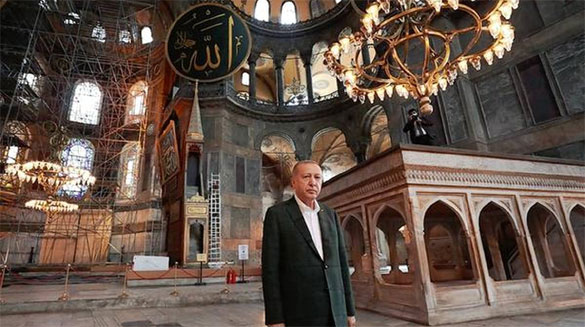 This controversy draws attention to the dangers of autocracy and intolerance, and to the broader need for religious freedom in the Muslim world—all too often a casualty of similar political posturing.

But this is about more than yet another Islamist attempt to solidify a wafer-thin electoral majority. It is an example of the tension between the traditional, moderate Islam that the majority of the world's Muslims subscribe to, and the political Islamism on which certain parties rely.

Rather than creating a rift between two of the world's great religions, this stunt should unite all faiths against their abuse by political actors. Instead of pitting Muslims and Christians against each other, this should be a rallying cry for all men and women of faith to protect their traditions from the corruptions of extremists. 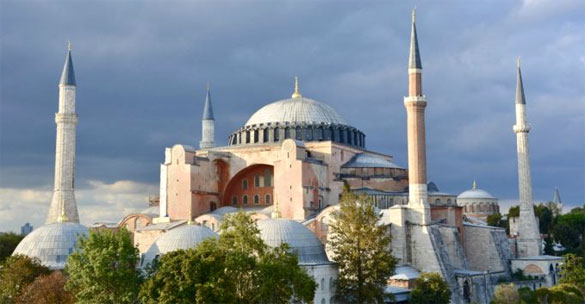 Make no mistake: the problem of intolerance belongs not to the religion of Islam, but to the political ideology of Islamism. Throughout its 1,400-year history, the religion of Islam has seen the traditions of other faiths part of its own, a shared heritage to contextualize Islam, not to detract from it. Islamists, however, see Islam as a political ideology—and other religions as competing political movements that must be dominated or eliminated.

The original Islamic society in Medina had a sense of citizenship that was based on shared rights and duties, not sectarianism. Christians and Jews, known to Muslims as "people of the Book" lived in Medina alongside Muslims. The Prophet Muhammad even married a Christian, known as Maria the Copt (Maria is to this day a common name in parts of the Muslim world.)

This tolerance and integration extended not just to people of other faiths, but to their place of worship, too. The act of making a church into a Mosque—an injustice committed in Hagia Sophia's case first by Sultan Mehmet II in 1453, and again by modern-day Islamists this month—runs firmly against the traditions and edicts of Islam. The Prophet instructed his followers, in relation to pre-existing religious communities and their places of worship, to "leave them there to practice in peace" and the Quran states that "there is no compulsion in religion."

What greater compulsion can there be than demanding a monopoly on worship? This was certainly not the attitude of Caliph Omar, when he arrived in Jerusalem in 637 and was invited to pray in the Church of the Holy Sepulchre. He refused, fearing that this would encourage Muslims to convert the Church to a Mosque. Instead, he prayed outside—at a location which is now the site of the Mosque of Omar.

Omar is a towering figure in the history of Islam, one of Prophet Muhammad's closest companions in life and a successor to him after his passing. But he is not the inspiration for Islamist extremists. They are more excited by the most aggressive, much later periods of the Ottoman Empire, which they seek to emulate.

And the conversion of the Hagia Sophia runs not just against the traditions of Islam, but against present. Churches have been protected and restored in recent years in Egypt, Lebanon and elsewhere across the Muslim world. This recent folly is out of tune with the spirit of Islam, and out of step with how Islam is actually practiced by the vast majority of Muslims worldwide.

It is important to understand that these actions are based not on religious legitimacy but political expediency. The pan-Islamic movement from which many extremists derive their political instincts is the Muslim Brotherhood. Proscribed as a terrorist group in many countries, the Brotherhood is interested in Islam only insofar as it can serve their cause for (often bloody) upheaval and revolution.

The Brotherhood's priority is power, not principle. As well as gradually seizing control of once moderate states, they are working to export the revolution by recruiting and corrupting foreign officials, allegedly including a former Saudi intelligence official, currently the subject of an Interpol arrest warrant.

It is easy to speak of Islam's inclusive, multicultural heyday when Islamic civilization was an object of envy for the world.

It is harder to ask how we strayed so far from the proclaimed principles of our faith. In Saudi Arabia, for example, the influence of ultra-conservative ideas in the past has meant that contemporary Saudi society has not always been as inclusive as the Prophet's own community.

However, as part of the sweeping reforms and return to moderate Islam declared three years ago, I hope believe that soon we will see Saudi Arabia lead the region back to its historical norm of welcoming all religions.

It would be only natural for the birthplace of Islam to reflect the faith's most enduring and inclusive characteristics, not the modern supremacism of the ideologues who use and abuse Islam for their petty political gains.

Mohammed Alsherebi is an investor and advisor to global leaders on strategy and investment in the Middle East.

The views expressed in this article are the author's own.​​​​​

Original Headline: Why I Do Not Intend to Pray in the Hagia Sophia 'Mosque'