Israel’s Rihanna Is Arab and Jewish

Who is the ultimate Israeli of 2020, the personification of this country’s soul? Is it the sunburned soldier? The shaggy tech hustler in Tel Aviv? The hilltop fanatic? The correct answer was revealed to me and 9,000 others a few weeks ago in Tel Aviv: the apparition in a glittering crystal mini-dress rising from beneath the stage on invisible hydraulics to a burst of strobes and smoke and a teenage shriek into my ear: “Nasreeeen!” 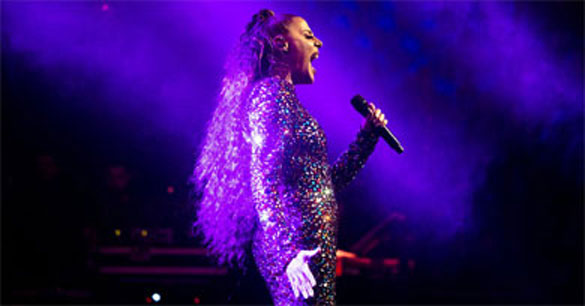 Nasrin Kadri has ascended to the pinnacle of pop in the Jewish state.Credit…Dan Balilty for The New York Times

In China it’s the Year of the Rat, but here in Israel it’s the year of Nasrin Kadry, who began life on rough Arab streets near the docks in Haifa and has now, at 33 years old, ascended to the pinnacle of pop in the Jewish state. The biggest concert venues, the judging dais of “The Voice,” A-list duets — all belong to Nasrin. Her improbable rise has much to say about this society and specifically about the way it operates in the places where highbrow experts don’t look.

Nasrin, known to all by her first name, became famous the modern way: on a reality TV talent show, a kind of local “American Idol” dedicated to a genre of music known as mizrahi. That’s Hebrew for “eastern” and refers to an Israeli blend of Middle Eastern pop with Greek and Western influences.

She’d been singing for years before that, starting as a kid holding a squeegee stick like a microphone in the mirror, mimicking the actresses in the Egyptian musical melodramas that used to be broadcast on public television here every Friday afternoon. The movies had cult status not just among Israeli Arabs like Nasrin’s family, one-fifth of the population, but also among Israeli Jews, about half of whom have family roots in the Middle East or North Africa.

“My mother would yell from the living room, ‘Enough, you’re driving us crazy!’ I’d make a lot of noise, and it was a small apartment,” Nasrin recalled when we spoke recently in a cafe near the upscale tower where she lives in Tel Aviv.

At 17 she was spotted by a few Moroccan Jewish musicians playing Arabic music at the home of a friend, an Arab girl from Nazareth. After that she spent years working in bars, singing the classics of the Egyptian diva Oum Kalthoum, fending off aggressive and drunk men. “It was a tough world, but that’s where I learned,” she said. She had no other musical education.

She lived at home in those years, helping her diabetic mother and cleaning houses to supplement what her father made driving a cab. In the evenings she’d wait for the band to pull up and honk. “I’d come home from work, shower, get up on high heels, put on jewellery, red lipstick, my huge fur coat and go to the clubs to sing,” she said. This was a questionable pursuit for a Muslim girl. “My mother didn’t want to let me, because what will the neighbours say, the relatives,” she remembered. But the family needed the money, and that settled it.

Winning the TV song contest in 2012 propelled her from the bars onto the bottom rungs of the mizrahi pop scene. She had a hit with the single “Learning to Walk” in Hebrew and a string of others like “Albi Ma’ak,” Arabic for “My Heart Is with You,” which blended both languages in a way that seemed completely natural. Her Hebrew, which she says she picked up in earnest only after high school, improved with coaching, and her look was modified by the glam technicians. But her style remained that of the grand divas of Lebanon and Egypt, like Oum Kalthoum, about whom it’s said that she’d wear boys’ clothes to sneak into the mosque with her brothers to escape the strictures of her Egyptian childhood and unleash her female voice.

In 2017, fresh off a gig opening for Radiohead in the U.S., the pop star sang at Israel’s official Independence Day celebration, an unusual gig for an Arab artist. The invitation came from the Likud culture minister, Miri Regev, a sharp-tongued hard-liner whose family roots are in North Africa, like those of many Likud voters. Ms. Regev has said that Arabic music “has something to offer Israeli culture.”

If you can understand why it makes sense for that statement to come from a right-wing politician and not from the left, you understand something tricky and important about Israel. The Israelis who are closest to the Arab world — the Jews whose families are native to that world — tend to lean to the political right, in part because they were treated with disdain by the left, and in part because Arab Muslim societies marginalized them, expelled them, seized their property and then, after 1948, subjected their new state to wars and a siege that has gone on for more than 70 years.

Israel’s founders always wanted the country to be European, and its Middle Eastern side was long kept in the cultural basement. This was reflected in the status of mizrahi music as a fringe scene scorned by critics and trafficked on bootleg cassettes. But in the past decade or two, Israel’s old elite, which was rooted in Eastern Europe and inspired by the socialist ideal of the kibbutz, has aged out of relevance, and the country’s repressed Middle Eastern soul has surged into the vacuum.

This helps explain why Israeli politics and culture — and pop music — are increasingly discordant for Westerners. There’s a renewed interest in the Jewish sages and religious poetry that flourished in the Islamic world, for example, like the liturgical form known as piyyut, which now shows up not just in college courses but on Top 40 radio. Even an Israeli supermarket aisle is confusing for a shopper expecting what a North American would consider Jewish food: the shelves are heavy on couscous, eggplants and the rest of the pantry of the Levant. There’s more and more about Israel that’s easier to grasp if you’re a Muslim from Beirut than if you’re a Jewish New Yorker. This is a key trend in the country right now, and Nasrin’s riding it.

Yaron Ilan, an influential mizrahi radio host, sees a generational change. People around his age, 50, still call the music mizrahi or Mediterranean. “They still think of the Mediterranean sound as something different from Israeli music,” and that has changed among younger listeners, he said. To them, what Nasrin is singing is Israeli music — and she’s doing it not in small clubs in south Tel Aviv but in the Menorah Arena, the biggest indoor venue in the city.

If Nasrin is representative of the hybrid culture emerging here, there’s one part of her biography that’s truly unique: her decision not just to sing in Hebrew but also to actually embrace Judaism.

This is something that almost never happens in the Middle East, where religion isn’t a private decision but a tribal affiliation that’s virtually impossible to leave. The exceptions are so scandalous that they’re remembered, like Leila Mourad, a movie superstar in mid-20th-century Cairo, who was Jewish and converted to Islam.

As Nasrin describes it, her childhood home was Muslim but not particularly religious, and her first interest in spirituality was through a Jewish boyfriend, a darbuka drummer from a traditional Moroccan family. She began fasting on Yom Kippur and keeping the Sabbath in her 20s. They broke up a few times over the course of a decade, got engaged, then broke up again, but she decided to go through with conversion anyway in 2018, immersing herself in a ritual bath, accepting religious commandments and adding a Hebrew name, Bracha, or “blessing.” It was all covered by the tabloids.

This has been painful for her parents. “I don’t make light of my own religion and I don’t forget where I’m from,” she said. “I never wanted to hurt my family or anyone else.” Conversion certainly hasn’t hurt her popularity with her Israeli audience, but the truth is they loved her before, and she dismisses any suggestion of a motivation beyond the spiritual. She has been speaking to God for years, she said, in the language spoken by Jews. “When I need him, I speak to him only in Hebrew,” she told me. “He stayed with me. He helped me. Everything I asked for until now he made come true.”

Complicating Nasrin’s conversion, in a state where religious status is controlled by an Orthodox bureaucracy, is her job. The sparkling red jumpsuit she sometimes wears in concert, which looks like it might have been borrowed from Rihanna’s closet, doesn’t quite match rabbinical standards of modesty. And when she was recently spotted in a seafood restaurant in Tel Aviv, her P.R. people had to release a statement clarifying that she didn’t actually eat the seafood, which isn’t kosher.

At the same time, she has had to fend off prejudice from some Jewish Israelis (who sometimes tell her that because they love her she’s not “really Arab”) and anger from Muslims who see her as a traitor (“A Love Story Led Her to Treachery,” read the headline on a Saudi celebrity site). She’s navigating a country that is simultaneously more open to its own Arab spirit and more suspicious of Arabs: a country where Nasrin can show up on TV at the “Big Brother” house to dedicate a song to one of the residents, the Israeli Arab transgender beauty queen Talleen Abu Hanna — and also the country that recently passed the “nation-state law,” which downgraded the status of Arabic as an official language. Nasrin criticized the law in a radio interview, saying it “canceled the language of my mother and father, of my neighbors, and of millions of Arabs who live here.” The law was championed by politicians like Miri Regev, whose own family spoke Arabic a generation or two ago and who thinks Israeli culture should learn from Arabic music. It’s a complicated place, and Nasrin is charting a complicated course.

But the secret of her success is simple, said Yaron Ilan, the DJ, and doesn’t have much to do with her ethnicity. “Nasrin is a once-in-a-generation talent,” he said. Being Arab hasn’t helped her or hurt her. “People accept her as she is,” he said. “I don’t think it held her back for a moment, and she never used that ticket.”

Mizrahi pop isn’t doctrinaire; it’s commercial and unapologetic about pushing any button that works. At the concert in Tel Aviv there was a buzuki solo and darbuka drums, but also some effusive strutting to Beyoncé’s “Crazy in Love” and a bit where Nasrin posed against a backdrop of satanic flames flanked by two guitarists wailing like Slash. There was a lot going on.

The audience liked all of that, but it was “Dalaleh Dalaleh,” an Arabic number popular here at weddings, that made them lose it, the peroxide matrons twirling their wrists, all the single ladies maneuvering on heels. Everyone seemed to know the songs — not just the regular fans but also the Tel Aviv celebs who’d come out tonight to see the Arab queen of the Israeli scene, gazing up from the V.I.P. seats at her dazzling boots.

Few singers in Israel can sell out the basketball arena by themselves, but Nasrin just had. After the show ended, she announced that she’d be back next month.

Matti Friedman, a contributing opinion writer, is the author, most recently, of “Spies of No Country: Secret Lives at the Birth of Israel.”