In 33 Years, the Solemn Days of Rosh Hashanah and Muharram Juxtapose: For Jews and Muslims, Both, This Is a Time for Introspection

By Marc Schneier and Shamsi Ali 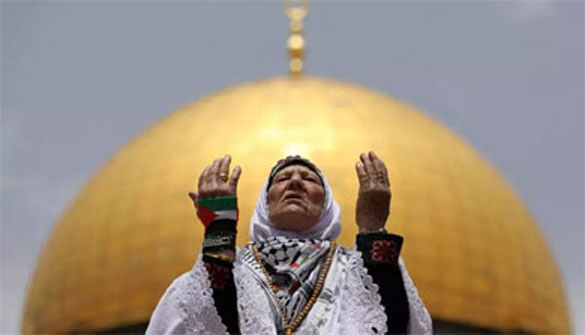 The Dome of the Rock is seen in the background as a Palestinian woman prays on the second Friday of the holy fasting month of Ramadan, on the compound known to Muslims as Noble Sanctuary and to Jews as Temple Mount, in Jerusalem's Old City, May 25, 2018.

This year, for the first time in 33 years, the solemn days of Rosh Hashanah (the Jewish New Year) and Muharram (the Islamic New Year) juxtapose. In both faiths, the advent of the New Year is a time for introspection and self-examination. The upcoming holiday season for 16 million Jews and 1.6 billion Muslims offers the opportunity to reflect on the current state of Muslim-Jewish relations, how far we have come and the journey as we venture forth.

The two of us, an imam and a rabbi based in New York, have labored for more than a decade with other faith leaders from both communities to strengthen Muslim-Jewish relations across the United States and around the world. Indeed, considerable progress has been made.

Today, there is a broad global network of synagogues and mosques, Jewish and Muslim sisterhoods, young leadership and collegiate groups that engage with each other. In the U.S., the coalition of Muslims and Jews denouncing bigotry together and upholding religious freedom has been given a somewhat ironic boost over the past three years by the exponential growth of xenophobia, racism, Islamophobia and anti-Semitism.

And yet, our respective New Year traditions uniquely demand of us to take inventory in an objective and honest, even if painful, demeanour. Looking at the state of Muslim-Jewish relations in a truthful and clear-eyed manner, without cheerleading or self-delusion, we must acknowledge that our two communities will not be able to fully come together as genuine friends and full allies as long as the Israeli-Palestinian conflict grinds on without resolution, continually worsening rather than getting better.

No matter what we are able to accomplish on our end, the fate of Muslim-Jewish relations around the world is ultimately held hostage to the disinclination of Israeli and Palestinian leaders to make the necessary compromises to reach a resolution of their ongoing conflict.

Over the years, those of us involved in the quest to improve Muslim-Jewish relations have evolved a position designed to neutralize the so-called ‘elephant in the room;’ namely, that Jews and Muslims can agree to disagree respectfully about the Israeli-Palestinian conflict even while working constructively to strengthen Muslim-Jewish relations at home.

That formulation has worked, but only up to a point. While the deteriorating situation in Israel-Palestine has not prevented Muslim-Jewish dialogue and cooperation from moving forward, it has certainly limited its scope and effectiveness; especially among the large numbers of people in both communities who are unable to set aside the Israel-Palestinian conflict in the interest of improving relations at home.

And indeed, can we truthfully claim to be fully encountering each other when we keep such a core issue off the table? Can we ever come to trust each other and work effectively together as allies, when we have such discordant loyalties vis a vis a conflict that is overriding for both our communities?

What was once known as the Israeli-Palestinian peace process has irretrievably broken down. This has led to mutual recriminations that set back relations between Muslims and Jews in New York, Chicago, Los Angeles, Toronto, London, Paris, Melbourne and throughout the world.

In this holiday spirit of candor that has led us to acknowledge the above, we would like to say to Israeli and Palestinian leaders: ‘You are doing a disservice not only to your own peoples, but to us as well. By refusing to reconcile, you are undercutting the efforts of Muslims and Jews to reconcile in countries around the world. Failing to reach peace is causing Muslims and Jews to lash out at each other; sometimes violently.’

By doubling and tripling down uncompromisingly on their respective zero-sum game narratives that the Land of Israel/Palestine belongs exclusively to their own side, Israeli and Palestinian leaders are failing to live up to their responsibilities. Either they don’t understand the deleterious impact of their endless conflict on Muslims and Jews around the world, or, conversely, they do understand it, but simply don’t care.

For Muslims and Jews, this majestic season is a time to examine our achievements and our failures to recognize the gulf between where we could be and where we are.

As long as the Israeli-Palestinian conflict continues to worsen, Jews and Muslims here and elsewhere will not be able to achieve full reconciliation and mutual embrace. Let us be honest about what we can change and what we cannot. We turn to Israeli and Palestinian leaders to assume this sacred responsibility as well.

The views expressed in this article are the authors' own.