India: Where Upanishads and Hadith Are Taught Together

As the sun slowly warms the small classrooms of Madrasa Gyan Sagar, students return from the extended winter break to welcome New Year’s Day at school.

There is a picture of Saraswati, the Hindu goddess of knowledge, displayed prominently on the wall in the Principal’s office. Outside is a blackboard on which is inscribed a quote from the Brihadarnyaka Upanishad (Asato Maa Sadgamaya) and one from the Hadith (Knowledge is the greatest wealth.) 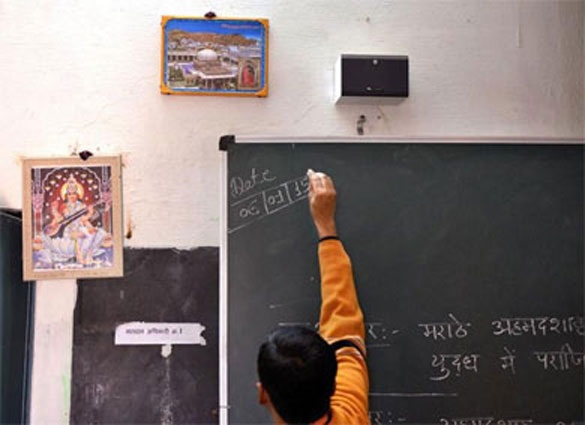 Images of goddess Saraswati and Ajmer Shariff share the wall at a classroom in Madarasa Firdose centre at Mandasaur in Madhya Pradesh. Photo: Prashant Nakwe

In a classroom, three girls, Ambreen, Simran and Farida, begin reciting Saraswati Vandana. They study in a madrasa, probably unlike any other in the country.

Gyan Sagar is one of the 128 madrasas run by a group of women in and around Madhya Pradesh’s Mandsaur district, which is otherwise famous for its poppy farms and high-grade opium. In 78 of these madrasas, Hindu students outnumber their Muslim friends (over 55 per cent of the students are Hindu), while 630 of the 865 teachers employed by the group are Hindu.

The Hindu religion is taught as a compulsory subject for students from Hindu households, with textbooks comprising detailed explanations of religious rituals and their scientific basis. “Most of the families in this village [Songari] are Muslim. Yet, the madrasa offers both religions as subjects. Students learn about their respective religions and share the teachings with their classmates from the other religion in their free time. The entire experience is very enriching,” says Gagan Bhatnagar, Principal of Madrasa Gyan Sagar.

Five Muslim and two Hindu women form the Nida Mahila Mandal (NMM), which operates these schools, headquartered at Madrasa Firdaus, the main branch just outside the gates of old Mandsaur city. The madrasas — with names such as Madrasa Gurukul Vidyapeeth and Madrasa Jain Vardhaman — have a strength of 5,500 students from across the district.

Set up in 1992 by Shahzad Qureshi, Madrasa Firdaus initially used to impart religious education and offered free tuition to poor students from other schools. In 1998, when the Madhya Pradesh government set up the Madrasa Board, the Nida Mahila Mandal, a registered society, got itself accredited as a study centre to offer higher secondary education.

“We were educating children from poor families. A lot of poor Hindu families wanted to enrol their children in our schools, but were concerned about religious education,” says NMM chairperson Talat Qureshi.

“That is when we thought of reviving India’s older system of madrasas that offered subsidised education, and where such legends as Munshi Premchand, Raja Rammohun Roy, Bharatendu Harishchandra and Pandit Ramchandra Shukla had their education,” says Dr. Qureshi, a dentist by profession.

Modern education is the primary focus of the Madrasa Firdaus group. However, since it is affiliated to the Madrasa Board, it must offer religious education. To get around that condition, the NMM sought help from Hindu friends and prepared a Hindu religious education module and integrated it into the curriculum. As a result, Hindu religion is a compulsory subject for Hindu students studying in these study centres, while Muslim students have to study and pass Deeniyat.

“The Hindu Dharma textbook contains the Gayatri Mantra, Solah Sanskaar and Pranayaam, among other topics, and explains their scientific basis,” says Nemichand Rathore, a freelance journalist who drafted the textbooks.

While English is the preferred medium of instruction, Hindi is a compulsory language, and students can choose either Urdu or Sanskrit.

Ayushi Varshi, 16, has opted for Urdu and flawlessly recites Kalmas and Ghazals. “My parents encourage me to learn Urdu. They say it offers a lot of career opportunities,” she says.

Her siblings Mehek, 12, and Abhi, 9, enrolled in Insha Public School, another branch of Madrasa Firdaus, are also learning the language.

Then, there is Shabnam, a Class VIII student of Madrasa Firdaus, who is fascinated with the Gayatri Mantra. Bolne Mei Bahut Accha Lagta Hai [I love the sound of it], she says, after reciting it.