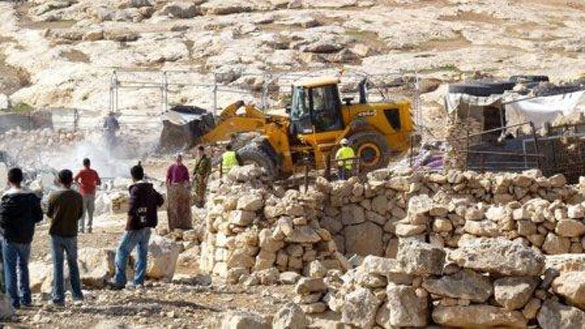 Peace talks between Israel and the Palestinians have been frozen for almost two years. But Palestinians say that doesn't mean events aren't happening on the ground.

Recently, the Israeli military issued orders calling for evacuation and demolition of nearly a dozen Palestinian communities in the occupied West Bank. Palestinians see this as evidence of Israeli plans to annex the territory, though Israel denies this.

Palestinian Ismael el-Adrah, 67, is a shrunken man with a snow-white beard and a bright blue shirt, who is unusually dapper for a farmer in the remote Hebron hills. He lives in a collection of tin-roofed shacks, tents and concrete homes with his four wives, 33 children and 150 sheep.

Scattered nearby are other villages similar to this one, all of them under threat of evacuation and demolition. 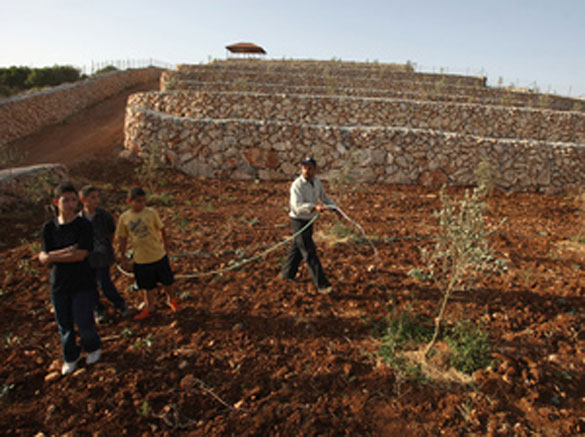 Palestinian Amer Dhabreh waters trees on his land in the village of Ein Yabrud, near the West Bank city of Ramallah, on June 10. Dhabreh believes that rehabilitating his land, which falls in Area C, will protect it from Jewish settlements and Israeli restrictions.

Adrah says the land has been the property of his family since the days of the Ottomans, who ruled the area until the end of World War I. For generations, the family has farmed and raised sheep, he says.

The Israeli military, though, says it needs the area for a firing range, and it's pushing to get the villagers out through the Israeli courts.

The Battle Over Area C

But Palestinians say the fight isn't over a single piece of land. It's a much broader battle, they say.

The communities lie in what is known as Area C. The Oslo peace accords of 1993 divided the West Bank into three sections pending a final settlement of the Israeli-Palestinian conflict.

Area C is under full Israeli administrative and security control and accounts for some 60 percent of the West Bank.

Most Jewish settlements in the West Bank are located in Area C, and Israel restricts Palestinian building in these areas.

Abdul Aziz Abu Fanar works in the nearby Hebron municipal centre of Yatta. He says the Israelis' actions in Area C indicate strongly that they want to annex it.

It's a suspicion that has only been fuelled by recent statements from right-wing leaders in Israel who have come out publicly in support of such a plan.

"The idea is to apply Israeli sovereignty and law on the Israeli-controlled areas, so it becomes Israel," says Naftali Bennett, a former adviser to Israeli Prime Minister Benjamin Netanyahu and an advocate of the settlements. "The Israeli-controlled areas become effectively Israel, which is what happened in Jerusalem, various neighbourhoods, what happened in the Golan Heights."

Area C, which is under full Israeli control, makes up 60 percent of the West Bank. 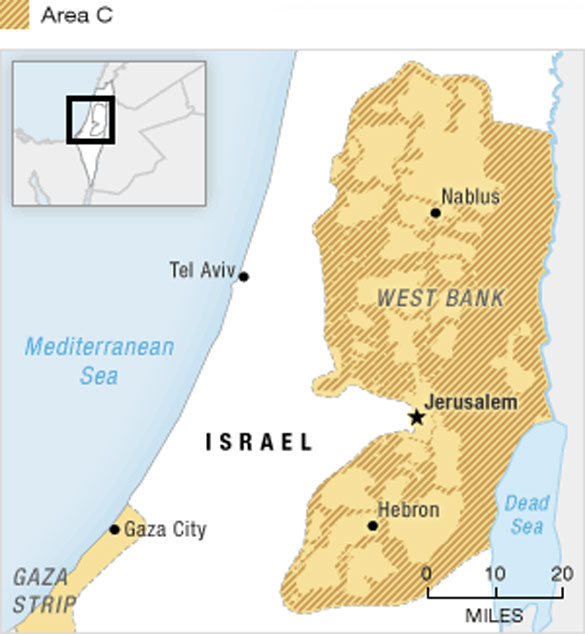 Relatively few Palestinians live in Area C — the estimates vary from 90,000 to 150,000 out of some 2.5 million Palestinians in the entire West Bank.

So far, annexation of the West Bank is a fringe view that hasn't gained mainstream support in Israel.

Dan Meridor, Israel's deputy prime minister, dismisses claims that Israel will unilaterally annex any part of the West Bank, which he calls by its biblical name of Judea and Samaria.

"There is no policy of annexing any part of Judea and Samaria. It's 45 years [since Israel took the West Bank in the 1967 war], and with the exception of Jerusalem, we didn't annex one inch," Meridor says. "Not only this, we agreed to the paradigm of a Palestinian state living alongside Israel as a final agreement."

In court documents, Israel claims that it's the Palestinians who are trying to create "facts on the ground" in area C. It says with the support of the Palestinian Authority and the international community, Palestinians are moving people and building structures in Area C in contravention of the Oslo Accords.

Yossi Beilin was one of the architects of the Oslo peace accords. A left-wing Israeli politician who is now an analyst, he says Israel has no need to formally annex Area C and incur the wrath of the international community.

"We are building there, we are announcing universities there," he says. "There is no problem whatsoever for any Israeli to move around freely in Area C and to do whatever he or she wants to do there. Why bother and make it an official annexation if de facto, it is annexation?"

And that, say some Palestinians, is exactly what's happening.

Back in the Hebron hills, Adrah, the farmer, says despite the pending court case over his land, the Israeli army is trying to make his life impossible so that he will leave of his own accord.

There is just one unpaved road that leads to his homestead. It's how his children get to school and his only way to get into town.

As we were leaving the village of Bir el-Aid on a recent day, Israeli army vehicles blocked the way. A military bulldozer set up concrete blocks across the road to prevent villagers from crossing in or out of the area.

And then an Israeli soldier told us that us we had to leave because this was now considered a closed military area.