Words Are Bridges: Polymath Philologist Maulvi Muhammad Husain Azad’s Work Shows That Sanskrit and Persian have Much In Common 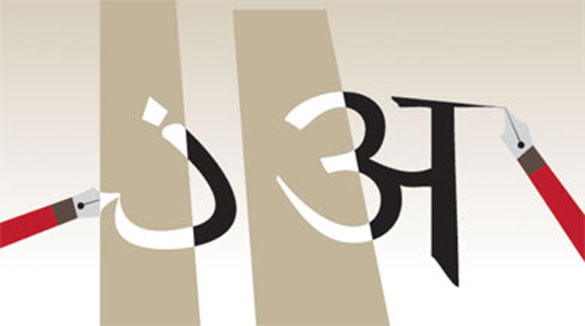 Take the example of the word for ‘ask’. In Persian, the verb is ‘porsidan’; in Hindi, it is ‘prashan’, which comes from the Sanskrit root ‘prch’. This is where our Urdu word ‘poochch’ comes from. (Illustration: Pradeep Yadav)

Audrey Truschke, Mellon postdoctoral fellow at the department of religious studies at Stanford University, talking recently to an Indian daily, said, “Sanskrit flourished in the royal Mughal court primarily under three emperors: Akbar, Jahangir and Shah Jahan. However, we should not make the error of attributing Aurangzeb’s lack of interest in Sanskrit to his alleged bigotry.”

Aurangzeb’s name is being removed from public places in India these days, but Truschke thinks he is “a severely misunderstood historical figure who has suffered perhaps more than any of the other Mughal rulers from present-day biases”. The decline of Sanskrit towards the final part of Mughal rule happened because it was then yielding primacy to Hindi.

In Pakistan, Aurangzeb is lionised by the ideology of the state, which understandably denigrates an eclectic Akbar. But among the people, there is a cleavage on Aurangzeb, whether you like it or not. The secularists and, in the more abusive appellation, the “liberals” don’t like Aurangzeb, who has become the yardstick of where a Pakistani intellectual stands.

I have a number of favourites in Indian history. My ideal was the polymath, philologist Maulvi Muhammad Husain Azad (1830-1910), whose work, Sukhandan-e-Fars, remains my favourite book. He loved Sanskrit for a reason.

Sukhandan-e-Fars traces the common roots of Sanskrit and Persian, which was the language of the elite and the establishment in India before the British came and encouraged the more popularly spoken Hindustani. Azad was born in Delhi but became a wanderer after being suspected of siding with the wrong party during the 1857 uprising against the East India Company. Not many have studied the book closely because, for some strange reason, South Asians are not interested in how words travelled between civilisations.

Azad thought Persian and Sanskrit were sister languages and gives lists of words that prove this. He knew a little about the rise of European philology but his book misses all the other Indo-European languages linked to Sanskrit. Of course, Urdu and Hindi would be nothing without the “constructed” excellence of Sanskrit.

My contact with Azad took place in Government College, Lahore, where I studied for six years. He had taught Persian and Arabic there and ran a society of scholars promoting “useful” (Mufidah) knowledge among people still tethered to “religious knowledge” of the seminary. He wrote in a wonderfully forthright Urdu style and penned the first Urdu alphabet primer for children. He knew his Sanskrit and could lecture on it for

hours. His curiosity about Iran and Central Asia was great. This compelled him to join an inquiry commission sent out there, which made him a British spy in the eyes of his compatriots who could not understand his obsession with languages.

The lists are in Urdu and Devanagari scripts. He recognised that both didn’t have the “f” sound till Arabic, which doesn’t have the “p” sound, replaced it with “f”. Today, the Arabs pronounce Pakistan as “Bakistan” out of politeness — otherwise it would have been “Fakistan”, just as Pars had to become “Fars”. Persian brought the “f” sound to India, as if to prepare all of us for English.

Now, a look at Azad’s lists. Take the example of the word for “ask”. In Persian, the verb is porsidan; in Hindi, it is prashan, which comes from the Sanskrit root prch. This is where our Urdu word poochch comes from. In Russian, the word becomes “pros” in vopros. Pashto has tapos. The root prch or prk is present in the Latin word precare as it appears in “precarious” (that which requires prayer). The English word “pray” comes from this root and is thus related to the Urdu-Hindi word poochch.

The English word “sorrow” comes from the Germanic sorge after its “g” went silent. In Persian, it becomes sog; in Sanskrit, shok gives us our Hindi name Ashok (without sorrow). In Azad’s lists, almost all parts of the body are the same in Persian and Sanskrit. If it is bazu in Persian, it is bahu in Sanskrit, and can be been in the French word bras.

Everyone knows about the universality of “cow”, Gau in Persian and Sanskrit. But the word “horse” is rather hidden in Persian. In Sanskrit, it is Ashva; in Persian, it is asp, which is quite close. In Urdu, “rider” is Sawar, which is a Persian word but, according to Azad, if you look up Dari Persian (Afghanistan), the word occurs as aswar. The word has two parts, “asw” (horse) and “aroh”, meaning “mounting” in Sanskrit, which also uses it to express the sense of rising and growing. People who came from the mountains (roh) and settled in India were called Rohila. The desert in south Punjab in Pakistan is called Rohi, where plants grow at great speed after even light rain.

Of course, Pakistan’s great music band is called Arohi, the ascending note of a classical raga. Arun means “red” because of the colour on the eastern horizon of the rising sun (aroh), where Arunachal (eastern) is located.

In Pakistan, we take names like Gujranwala as our own. We subconsciously link the Wala in it to Arabic Wali, which means owner. But Wala is linked to the Sanskrit word for “enclosure” or “wall”, since in history; cities were defined by their condition of being walled. When we pronounce ala instead of Wala, we think it is Arabic, but that, too, comes from Sanskrit. Ala, meaning home, as in the Hindi Shivala and Himalaya. Him becomes Zim (frozen) in Persian (Zimistan) and Russian.

Many Gujarati Hindu friends of mine are named Shah (king), which comes from the Sanskrit Kshatriya (warrior). The Persian shah comes from a similar sounding root. The Greeks made it Xerxes. This gave us the “check” in “checkmate”, which means the king is dead.