India, Our Dear Country, Inspires Muslims And Non-Muslims To Live In Harmony

1.    Who is it that despises our motherland, why is our fraternity fading, and why are hatred and hostility reigning supreme instead of harmony and brotherhood?

2.    Every nation and religion teaches that you should live in peace and harmony with one another.

3.    India always belongs to Hindus, Muslims, Sikhs, Christians, and people of other religions who are descendants of predecessors who irrigated the land of India with blood and liver. 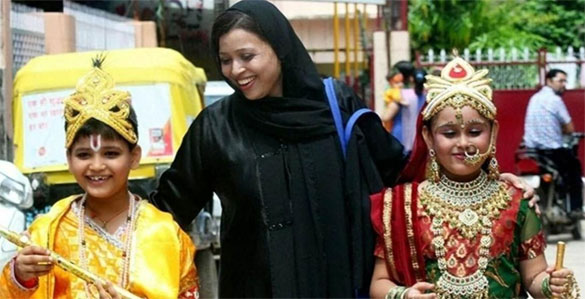 India is a democratic country whose example as a great country of the Ganga-Jamuni culture has been held up around the world. However, as we can see, owing to the deception of some anti-human elements, a tsunami of hatred has swept our dear motherland, devastating the entire nation. There is a pollution of hatred in the air here, making it nearly impossible for Muslims and the lower classes to breathe. And such a seed of hatred has been established in our common brotherhood that every day, somewhere, an occurrence takes place that causes the heart to tremble, the soul to shake, and tears to well up in the eyes for no apparent reason. All of this raises concerns about where our dear motherland is heading and why peace, love, and brotherhood are being harmed.

Indeed India is a democratic country. Here, people of all Dharmas, nations, and religions have equal rights. Every Indian citizen believes he or she is safe and pleased to be an Indian. Every celebration here is celebrated jointly, including Eid, Diwali, Christmas, and Holi, and this is the beauty of the country. But who is it that despises our motherland, why is our fraternity fading, and why is hatred and hostility reigning supreme instead of harmony and brotherhood? We wipe away the tears by recalling prior examples of our brotherhood and the example of the Ganga-Jamuni Tahzeeb and believe that we have paid our dues, which is incorrect. It is critical to take practical steps rather than just pondering and crying about a situation.

It is our responsibility to devise a strategy that will ensure the survival of our brotherhood. No matter how many political machinations are utilised to cause fighting between two communities of India, our brotherhood and love should never stop. All Indians must share responsibility for this. It is critical that we explore why our brotherhood is fading, why the mutual notion of peaceful coexistence that has existed between us for so many years is fading from our hearts. Are we so ignorant and cowardly that we battle with our own countrymen over petty political interests?

Religion and nationalism come after humanity. However, the heart of an extremist fool may be glad if a bulldozer is pushed into the home of a poor Muslim, but the heart of humanism will never be joyful. He will, on the other hand, suffer just as much as the victim whose home was razed and his entire life savings were wiped out. If a mosque is desecrated, a humanitarian will never be satisfied with such a heinous act, because no nation or religion claims to oppress anyone. Every religion forbids its followers from attacking an unarmed individual or abusing him in any way. Every nation and religion teaches that you should live in peace and harmony with one another. Those who are against it are no longer sincere believers in any faith. They're just a knucklehead with a bad concept.

People of all religions and nationalities have lived in India for centuries and will continue to do so in the future. By looking back in time, you can see an illustration of this. For hundreds of years, Muslims governed India. However, not only Muslims stayed in the country after their authority ended, but so did a vast number of people of other faiths and cultures. Some people, however, feel that residents of this country will be expelled because they are Muslims or adherents of any other faith or nation. It will be utter oppression, but only for a short time. This country belongs to Hindus, Muslims, Sikhs, Christians, and people of other religions who are descendants of predecessors who irrigated the land of India with blood and liver.

As a result, I implore all Indians to be humanitarians rather than extremists and to avoid allowing political objectives to destabilise our brotherhood in any way. We should consider the previous event in which the British used the political strategy of "divide and rule" to enslave us for years by inciting conflict. So getting caught into the same political game and fighting amongst ourselves is meaningless. Rather, we should live happily together because our country has always been and will always be the home of Hindus, Muslims, Sikhs, Christians, and people of various nations and beliefs. They all should know that True Deshbhakts will never allow political objectives to destabilise the peace and harmony of the Country