Marrying across religious lines has always been a challenge in India, a vast multifaith democracy where the pull of family and tradition remains strong. 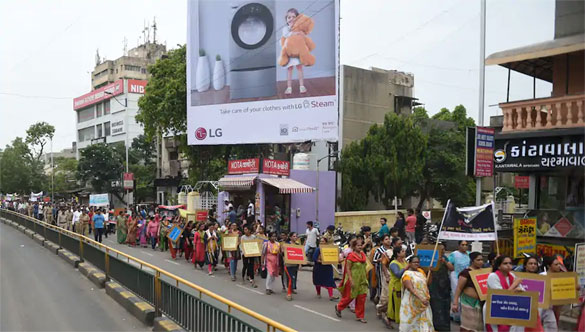 Now politicians in India’s ruling party are contemplating laws to thwart such unions, driven by a conspiracy theory that views them as a tool for conversions.

At a rally last month, the leader of the country’s largest state warned of the danger of “love jihad,” an inflammatory slur referring to an alleged plot by Muslim men to convert Hindu women through marriage.

Men who “conceal their names and play with the honor of daughters and sisters” should prepare for their final journeys, thundered Yogi Adityanath, the radical Hindu monk who leads the state of Uttar Pradesh.

The “love jihad” smear is baseless, but it has become common parlance among members of India’s ruling Bharatiya Janata Party. In recent weeks, four state governments have promised to enact new laws to combat the purported threat.

On Tuesday, the state cabinet in Uttar Pradesh — home to more than 200 million people — approved an order criminalizing religious conversions “by marriage” with jail terms of between one and 10 years. The order, once it’s signed by the state governor, would also nullify unions in which a woman changes her religion solely to marry.

The new laws will deepen concerns that under Prime Minister Narendra Modi, India’s Muslim minority is increasingly subject to suspicion, discrimination and even violence.

Couples belonging to different religions or castes have long faced hurdles in India that range from familial opposition to death threats. There is no official data on how many interfaith marriages there are in the country, but a study based on statistics from 2005 suggested they represented about 2 percent of the total. 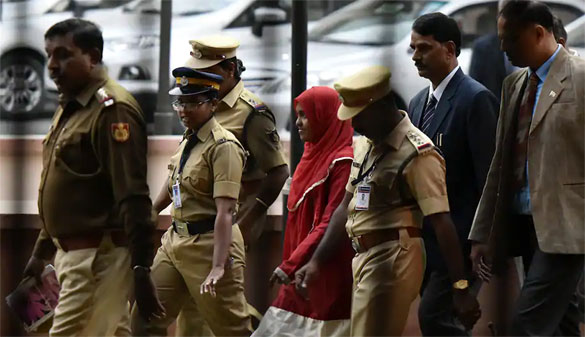 In 2017, a high-profile alleged “love jihad” case made its way to India’s Supreme Court. The court ruled in favor of Hadiya, center, whose marriage to a Muslim man was dissolved by a lower court on the grounds that she had been brainwashed into converting to Islam.

In recent years, some such couples have also endured harassment by Hindu extremists, who have revealed their identities and personal details online.

Now the notion of “love jihad” — once relegated to the Hindu nationalist fringe — has moved on to the legislative agenda in states controlled by the BJP.

Conspiracy theories alleging plots to seduce Hindu women and convert them to Islam have circulated for years, propagated by “a section of Hindu nationalist activists,” said Charu Gupta, a historian at the University of Delhi who studies issues of gender and sexuality. “But now it has this endorsement and sanction from authority and power.”

Earlier this week, Arun Singh, the national general secretary of the BJP, told reporters in Delhi that “love jihad” is a “very serious problem” that states should pass laws to address. “Many mothers and sisters have suffered its bad consequences.”

Such assertions are without basis. In India’s Parliament earlier this year, a government minister said no case of “love jihad” has been registered by federal authorities and no such term is defined in Indian law.

A probe by a national investigating agency in 2018 examined 11 interfaith marriages in the state of Kerala and found no proof of coercion.

More recently, police in the northern Indian city of Kanpur formed a special investigation team in August to scrutinize such relationships. The probe was initiated after several women became involved “with men from a different religion,” which caused “public anger,” said a copy of the team’s final report, which was viewed by The Washington Post.

The police examined 14 cases of interreligious relationships where some wrongdoing was alleged, either by a woman or her family members, and found no evidence of conspiracy, said Mohit Agarwal, a senior police official in Kanpur.

Despite the absence of evidence for the phenomenon of “love jihad,” three more BJP-controlled states — Madhya Pradesh, Haryana and Karnataka — have pledged to enact laws targeting it.

Anil Vij, a minister in the Haryana government, was among those promising strict action. “No one should, either by trapping a person in the web of love, temptation, by seducing or by threatening, change someone’s religion,” he said in a recent television interview.

Companies that depict interfaith romance have faced outrage. In Madhya Pradesh, state police registered a complaint against two Netflix India executives after a Hindu nationalist group objected to a scene in the serial “A Suitable Boy.” In the scene, a Hindu woman and a Muslim man share a kiss near a Hindu temple. (The complaint is unlikely to result in any penalty for Netflix.)

Last month, the jewellery brand Tanishq was forced to withdraw an advertisement built around a touching scene of interreligious harmony at a baby shower. It evoked a furious response from some Hindu nationalists, who threatened to boycott the brand for promoting “love jihad.”

Such rhetoric has prompted some unusual responses. A trio of journalists launched an Instagram account in late October called the India Love Project to highlight true stories of interfaith couples. The response has been overwhelming, said Samar Halarnkar, one of the founders. Every day new stories arrive, he said.

“It’s moving, it’s inspiring and in a sense, frustrating,” said Halarnkar. “The very fact that we’ve had to start something like this indicates where we are today as a country.”

India has a decades-old law that is supposed to make it easier for interfaith and intercaste couples to marry, but in practice often ends up doing the opposite, said Surbhi Karwa, a gender and law researcher in Delhi. Under the statute, an advance notice period and other formalities are required to ratify such unions.

The new laws under consideration in BJP-controlled states are “effectively telling people that you can’t marry outside your faith,” said Karwa. Women already face an uphill battle to assert their own choice of a spouse in India, where arranged marriages are the norm for most couples. Now, Karwa said, “the state is going to make it even more difficult.”

Many interreligious couples view the current atmosphere with dismay. Abdul Mustaqeem, a civil servant, is Muslim, and his wife Sonam, a language trainer who goes only by her first name, is Hindu. They met as students, fell in love and married in 2014. Today’s environment is “turning toxic” for couples like them, said Mustaqeem.

Close friends who once saw their relationship as normal have begun questioning it, the couple said. They think twice about posting their views on controversial topics on social media to protect their families.

“It’s hard to keep quiet, but we choose to,” said Sonam.

Joanna Slater is the India bureau chief for The Washington Post. Prior to joining The Post, she was a foreign correspondent for the Globe & Mail in the United States and Europe and a reporter for the Wall Street Journal. Her previous postings include assignments in Mumbai, Hong Kong and Berlin.

Original Headline: It was never easy being an interfaith couple in India. Now some states are making it harder.