For over 30 years Dallas has been home to one of America’s largest Dr. Martin Luther King Jr. Day celebrations. The apex of the celebration has always been two parades commemorating King’s legacy. One parade on the third Saturday in January convened by the city of Dallas, and the other referred to as “The People’s Parade” held on the Dr. Martin Luther King National Holiday and convened by Elite News, one of Dallas’ Black newspapers. 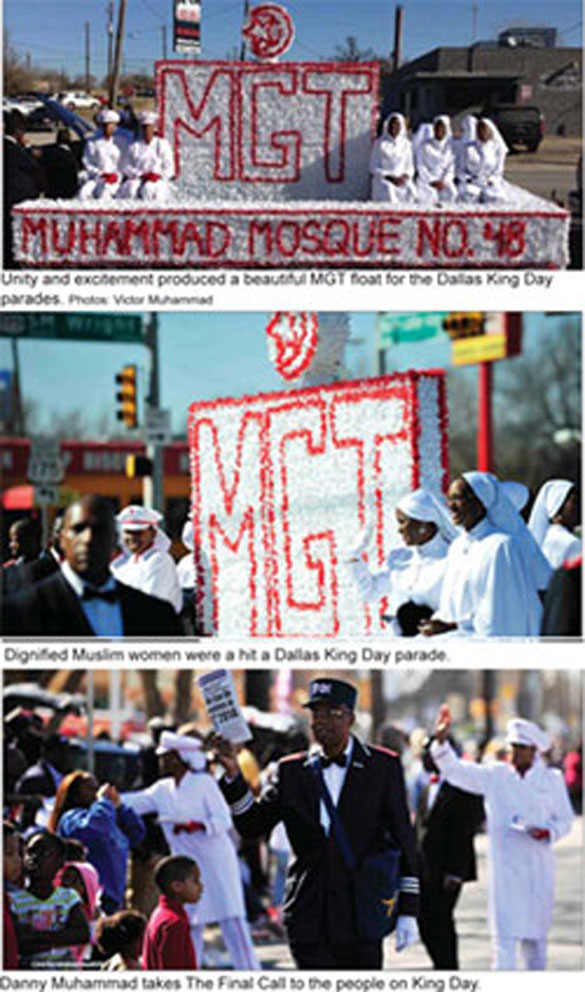 Synonymous with the parade are tens of thousands of people who enjoy floats, marching bands and vast entertainment from the sidewalks of Martin Luther King Jr. Blvd. in the Black community of South Dallas. Found in what many would call “Dallas’ Black Mecca,” or “Sunny South Dallas,” is the Nation of Islam mosque under the leadership of the Honourable Minister Louis Farrakhan. Muhammad Mosque No. 48 has a front row seat as the parade passes down MLK Blvd. This year a visionary from the mosque, Kamora Muhammad, who is also a member of the MGT-GCC, a training class for women in the Nation of Islam, thought it would be a good community outreach to get involved with the parades.

“The idea was not my own. I recently saw a picture shared on Facebook by The Honorable Elijah Muhammad Testimonial page of an MGT float that was part of the Nation of Islam’s First Muslim Parade in 1969 (as the picture was called). The first thought, was that we have to do this here in Dallas,” she said. Kamora Muhammad went to work galvanizing the forces she would need to make her vision a reality. “I immediately shared the picture and thoughts with Student Minister Jeffery Muhammad, who is a ‘make it happen soldier,’ Student Captain Danny Muhammad, Acting Student Captain Kim Muhammad, Student Lt. Toya X Seals, Student Squad Leader Haziqah Muhammad and Student Vanguard Lt. Tiffanie Muhammad, and the spirit of Almighty God, Allah, began to make it a reality,” she continued.

The float became a reality with the help and unity of various Believers in Mosque No. 48. People in the streets would see Student Minister Jeffery Muhammad, with the help of the young men of the Jr. FOI (Fruit of Islam) the men in the NOI, being taught to build the float. There was the diligence of the women of the MGT who decorated the float.

You could feel the legacy of the Muslim Parade on Chicago’s South Side in 1969 the presence as the FOI, in their uniforms, appeared strong and gallant accompanying the Muslim women who rode on the float and interacted with the community during the parades. According to Bashir Muhammad, who narrated the documentary chronicling the Muslim Parade in 1969, the streets where made safe by thousands of uniformed FOI who were a part of the parade. A powerful spirit was present as onlookers at both MLK parades shouted: “Here come the brothers! We know everything is alright since you all are here!”

It did not stop there: many women and girls were in awe of the beauty, elegance and care expressed by the MGT who came to interact with them. “You all are so beautiful. The sisters are here,” they said. The Dallas student minister felt energized by the effort. “We thank the Honorable Minister Louis Farrakhan for re-establishing the FOI and MGT class, to teach our women how to love and protect themselves, and to teach the Black man how to love, respect, and protect our women. I watched women as they stood with their daughters saying thanks to the MGT for providing such a wonderful example of modesty and dignity—as opposed to the image portrayed by the media of our women as sex objects,” he said.

The Muslims hope to add the annual parades to community outreach efforts. Kamora Muhammad is optimistic. “Our leader, teacher and guide, the Honorable Louis Farrakhan, is all about offering the solutions to solve the ills of our people and the ills of humanity. We have to inform the people of solutions that our leader is bringing to us without hesitation.

So, having the float was a fishing tool to make this happen. The people saw us and loved us. The response of the people was overwhelmingly phenomenal. They wanted to know who we are.    We distributed flyers and T-shirts so that the people would know where we are, come to hear the life giving teachings of the Most Honorable Elijah Muhammad, and accept their own and be themselves,” she said