The Man behind Malaysia’s Interfaith Tours

Uthaya Sankar was raised a Hindu, but as a child, he often went to Sunday school at a Christian church and even sometimes played at mosques.

"We had colouring contests, we went looking for the Easter eggs... and it was fun meeting people from different religions," said Mr Uthaya.

But by the early 1990s, things had changed, he said. People refused to visit other religions' places of worship and he felt Malaysia's political parties began to emphasise religious differences - rather than similarities - for political gain.

"The segregation was very obvious," said the writer and activist, now 41 years old.

So in 2010, Mr Uthaya decided to create a safe space for Malaysians of all faiths and ethnicities to discuss religion and race.

It was a pioneering move in a society where, observers say, ethnic and religious divisions are becoming more pronounced rather than less.

About two-thirds of all Malaysians are Bumiputera - ethnic Malays and indigenous groups. About a quarter of the population is of ethnic Chinese origin and about 7% of Indian origin. Malay Muslims form the majority, alongside sizeable Hindu, Christian and Buddhist communities.

Conservative and nationalist Malay Muslim groups that fight for Malay rights - such as Perkasa, backed by the former Prime Minister Mahathir Mohamad - have become increasingly influential and vocal in recent years, driving up tensions.

In early October, about a dozen young professionals and students gathered in front of Kuala Lumpur's Subramaniam Chettiar Hindu temple.

Rayner Yeo listened intently as Mr Uthaya told the story behind each Hindu statue. The engineer, 27, grew up in Malaysia's most ethnically and religiously diverse state, Sabah, on Borneo island.

His father is a Chinese Buddhist and his mother is a Christian from the Murut indigenous group. But Mr Yeo said he knew very little about other faiths.

"I don't really feel we are free or encouraged to discuss religion even between our close friends," he said.

Mr Yeo is not alone. Another participant, Nor Arlene Tan, who also writes about faith issues on the Projek Dialog website, said many aspects of religion were taboo in Malaysia.

Ms Tan, a 28-year-old Muslim of mixed Malay, Chinese and Portuguese heritage, compared religious identity in Malaysia to membership of a private club.

"We're trying to break through that exclusivity not just of Islam but among all religious believers," she said.

At a Chinese Buddhist temple, Ms Tan stood next to other Muslims and Hindus and burned incense as an offering.

Another participant, Perzeus James, said he joined the tour because as a Malaysian he was ashamed of knowing so little about other faiths.

The ethnic Indian Christian had never been to a mosque before stepping into the Al-Hidayah in the heart of Kuala Lumpur as part of the tour.

"Before I thought only Muslims could enter a mosque but now I'm here," Mr James said. 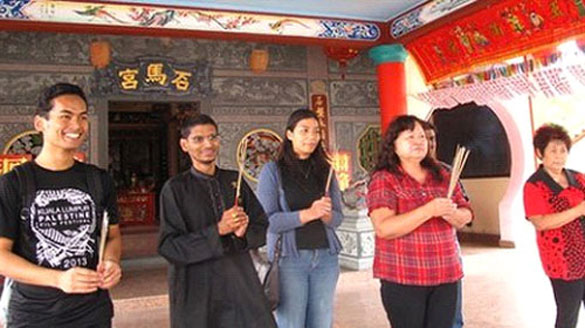 The organiser, Mr Uthaya, uploaded pictures from the visit online immediately - he believes social media is a good way to spread his message.

"It's important for Malaysians to see that it is okay for people of all faiths to visit these places of worship," he said.

But there are reminders of limitations to religious freedom in Malaysia, especially for Malay Muslims.

Near the entrance of the prayer hall is a poster from the Islamic religious affairs department reminding Muslims that only Sunni Islam can be practiced in Malaysia and that there has been a fatwa, an Islamic edict, against Shia Islam since 1996.

There are, however, official government efforts to foster national unity, as well as localised work such as that done by Mr Uthaya.

The prime minister's office said the 1Malaysia principle continued to inform policymaking. "Although our journey is not yet complete, Malaysia has maintained peaceful relations between its many races and religions for decades," a spokesperson said.

In the meantime, more youth groups have stepped in to organise interfaith walks and activities. 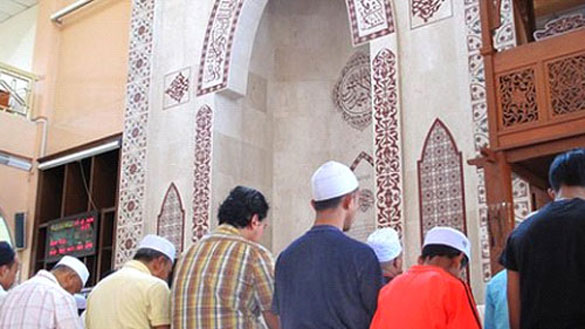 Only Sunni Islam can be practiced in Malaysia

It is a positive sign for Chandra Muzzafar, the chairman of the independent 1Malaysia foundation, which is not affiliated to Mr Najib's programme.

But he said there were young people equally moving in the opposite direction and keen on "erecting walls".

"Religious fault lines are a major challenge in the coming decade, because religion is intimately linked to ethnicity," he said.

Across town, the interfaith tour finished at the Sri Lanka Buddhist temple where the group ate lunch.

Azzam Syafiq, 21, attended an all Malay-Muslim school. He only started to have friends outside of his own race and religion at university.

He said he enjoyed the tour and was surprised at the structure of the Sikh temple, with its open space and central room to hold Holy Scriptures.

"It didn't look like what I stereotypically thought of as a temple. It's very similar to a mosque," he said.

Organisers hope there are more young people like Mr Azzam who will spread the message that Malaysians have more common with each other than they think.