Religious Leaders Stand Up For Peace Amid Anti-Muslim Attacks 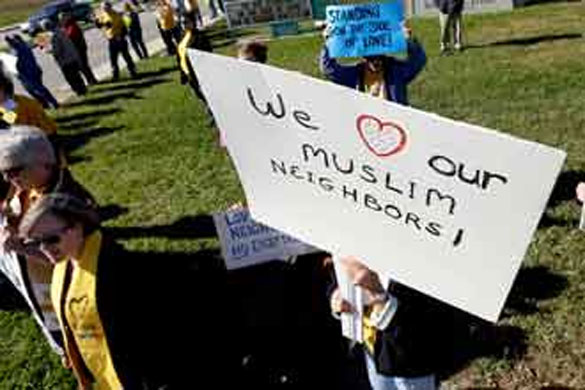 Amid a spike in anti-Muslim assaults, vandalism and death threats around the country since the terrorist attacks in Paris and San Bernardino and growing sentiment against the resettlement of Muslim refugees, congregations of all faiths have scrambled to think of ways to curb the violence and call for peace.

In Washington, D.C., on Sunday, the Washington National Cathedral played host to an interfaith pilgrimage of Christians, Jews and Muslims who walked with each other from congregation to congregation, calling for the faithful choose "unity over extremism."

For over 90 minutes, a small yet influential group of religious leaders marched with dozens of community members from the Washington Hebrew Congregation to the cathedral before ending at the Islamic Center of Washington.

Along the way, they held signs quoting the Quran on unity and condemning extremism.

"O humankind, indeed we have created you male and female and made you peoples and tribes, that you may know each other," said one (Quran 49:13). "American Muslims condemn ISIS and terrorism," read another.

The group hopes that congregations across the U.S. will join together to host their own pilgrimages.

Upon ending their march at the Islamic center, the clergy and religious leaders shared scripture and prayers from each of their traditions, and read the famed sonnet by Emma Lazarus that accompanies the Statue of Liberty: "Give me your tired, your poor/ your huddled masses yearning to breathe free/ the wretched refuse of your teeming shore/ Send these, the homeless, tempest-tost to me/ I lift my lamp beside the golden door!"

"In our prayers and witness, we celebrate the diversity of faith in America, and stand united in our commitment to peace, compassion and solidarity,” said Budde. “As violence and extremism seek to divide us, we call upon Americans of all faiths to stand firm in the values from which our strength comes, and we wholeheartedly reject the rising anti-Muslim sentiment across our land.

“Embedded in all three Abrahamic faiths is the understanding that we are all pilgrims," added the Rev. Gina Gilland Campbell, the canon precentor at the National Cathedral. "A pilgrimage is a spiritual activity, done in community. It’s a journey toward something, and this pilgrimage brings us closer to God, and to each other.”

While violence against Muslims has increased after the attacks in Paris and San Bernardino -- a HuffPost analysis counted at least 73 incidents targeting Muslims since the Nov. 13 attacks in Paris -- the weekend's pilgrimage is just one of many instances of communities coming together to support Muslims.

In our prayers and witness, we celebrate the diversity of faith in America, and stand united in our commitment to peace, compassion and solidarity. Rt. Rev. Mariann Edgar Budde, bishop of the Episcopal Diocese of Washington

This month, dozens of members of the Bay Area Unitarian Universalist Church in Houston came with "love thy neighbor" signs to rally in support of their neighboring mosque. In Lynwood, Washington, last week, Muslims and Christians hosted "Love in a Time of Fear," an interfaith gathering at Trinity Lutheran Church to support one another and stand against violence. During Hanukkah, members of Jewish Voice for Peace gathered each night across 15 American cities, where they declared their stances against Islamophobia and in support of refugees, and held signs that together created the shape of a menorah.

The Muslim community is also responding.

On Monday, the U.S. Council of Muslim Organizations (USCMO), an umbrella group that includes some of the nation's most influential Muslim civil rights groups, such as the Islamic Society of North America and the Muslim Public Affairs Council, announced a broad effort to combat extremism against Muslims and by Muslims.

That includes a national educational campaign about Islam, as well as an upcoming cross-country "Open Mosque Day."

Muslims "understand the magnitude of the challenge facing our nation and our community and will not allow either Islamophobes or un-Islamic extremist groups like ISIS to define American Muslims or to decide our fate," said USCMO Secretary General Oussama Jammal. "American Muslims will define themselves and will chart their own destiny by securing both our faith and the security of America."