Muslim-Christian Dialogue and the Fate of Iraqi Minorities

On March 5, Pope Francis, leader of the Catholic Church, embarked on a historic four-day trip to Iraq, where he met with officials, religious leaders and ordinary Iraqis of all faiths.

Remarkably, he went to Najaf where he visited Grand Ayatollah al-Sistani, the spiritual leader of Iraq’s Shia community. The meeting was a significant milestone in Iraqi history and the global history of interfaith dialogue. He also visited the ancient city of Ur, Erbil, the capital of Iraq’s Kurdistan region, and Mosul, where he prayed at the ruins of four churches destroyed by ISIL (ISIS). 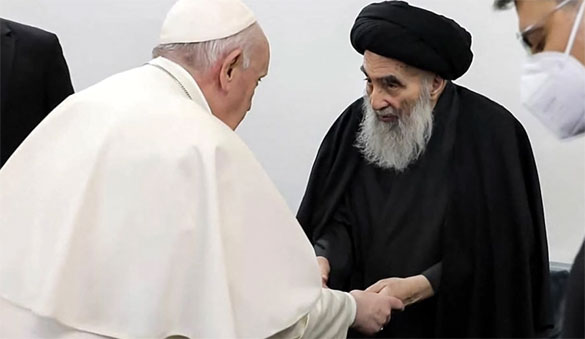 Iraq's most revered Shia cleric, Grand Ayatollah Ali al-Sistani met with Pope Francis and his delegation at his home in the holy city of Najaf, on March 6, 2021. [Ayatollah al-Sistani's Media Office via AFP]

The pope’s visit to Iraq offers moral support to Iraq’s beleaguered and dwindling Christian community and will hopefully encourage the Iraqi leadership to put more effort into protecting the many minorities the country is home to. While much can be done to ensure the safety of minority communities, it has to be recognised that their plight has much to do with instability linked to Iraq’s century-long state formation process and persistent foreign interference.

When he was elected pope in 2013, Archbishop Jorge Mario Bergoglio of Argentina decided to be named Pope Francis. His choice was deliberate and was made in reference to St Francis of Assisi, whose legacy the newly elected pope was inspired by.

St Francis was a Catholic preacher and mystic who during the fifth crusade set out to Egypt to try to promote peace and spread Christianity. During the siege on Damietta in 1219, he crossed enemy lines and succeeded in meeting Sultan al-Malik al-Kamil, nephew of Salaheddin. He asked the Sultan to embrace Christianity, which the ruler declined to do. Impressed by his audacity, however, he allowed Francis to preach for several days in Egypt.

Upon his return to Italy, the Catholic preacher revised the rule of the Franciscan order, which he had established, to encourage his devotees to live among Muslims peacefully and avoid conflict. This move was truly revolutionary given the fact that the Catholic church fully encouraged and supported the crusades.

Some 800 years later, Pope Francis set out to promote Muslim-Christian dialogue, making several historic visits to the Middle East and meeting with Muslim leaders. In 2014, he travelled to Jordan and Palestine. Three years later, he went to Egypt where he met with Sheikh Ahmed el-Tayeb, the grand imam of Al-Azhar, the preeminent seat of Islamic learning in Egypt. In 2019, he visited the UAE and Morocco.

His trip to Iraq was perhaps the most important and symbolic. It was the first country he decided to visit after the outbreak of the coronavirus pandemic and he proceeded with his plan, despite the spate of rocket attacks and a deadly bombing in Baghdad in the preceding weeks.

On March 6, Pope Francis visited Ur, a Sumerian city that dates back 6,000 years, which, according to the Judaic, Christian and Islamic traditions, is the birthplace of the patriarch Ibrahim or Abraham.

The significance of invoking Abraham’s legacy during the pontiff’s speech at Ur lies in the current polemics that imagine a Judeo-Christian civilisation in conflict with an Islamic one. By using Abraham’s birthplace as a setting for his speech, the pope stressed the concept of the Abrahamic faiths as a single tradition.

Even more important was his meeting with Grand Ayatollah al-Sistani, who has called on Iraqis to protect minorities since 2003. Even his 2014 fatwa, often seen as giving rise to the Shia militias that fought ISIL, in fact, was a nationalist appeal to all Iraqi citizens and it ended up motivating the formation of Christian and Yazidi armed groups to defend the nation.

After the meeting, al-Sistani’s office put out a statement that the grand ayatollah “affirmed his interest in Christian citizens living like all Iraqis in peace and security while preserving all their constitutional rights.”

While Pope Francis’s visit to Iraq is undeniably a historic event that could help improve the situation of Christians and other minorities in the country, it has to be recognised that the violence these communities have faced cannot be resolved just through interfaith dialogue.

Throughout Iraq’s recent history, foreign intervention and colonialism have severely exacerbated ethnic and religious tensions in the country. During the British mandate in Iraq, for example, the British colonialists actively recruited soldiers from the Assyrian community to set up a security force, protecting key colonial properties and military installations. The Assyrian Levies, as they came to be known, also participated in the quashing of Kurdish rebellions.

The role they played in the colonial occupation of Iraq caused resentment among the Muslim population which saw them as traitors to the cause of Iraqi independence. This was a typical example of the colonial divide-and-rule tactic, which sowed division within the Iraqi public.

When the Iraqi army sought to disarm these forces in 1933, a year after Iraqi independence was declared, a relatively minor skirmish led to the massacre of hundreds of Assyrian civilians in the town of Summayyil, while dozens of Assyrian villages were looted and burned by local Kurdish and Arab tribes.

Similarly, the US invasion of Iraq in 2003 escalated tensions between the various religious and ethnic groups in the country, resulting in a civil war. The security vacuum left behind by the Baathist regime resulted in inter-communal violence, which the Christians and other minorities bore the brunt of.

It also facilitated the ISIL invasion of Iraq in the summer of 2014, which pushed the Iraqi state to near collapse. The armed group sought to forge a homogenous state through religious cleansing of the population and public spaces, including antiquity sites related to the pre-Islamic past and religious sites used by minority and heterodox communities.

The expulsion of Iraqi Christians from Mosul and the Nineveh Plains, the extermination and enslavement of Yazidi communities, and the destruction of both communities’ temples were justified by ISIL’s twisted doctrinal beliefs but were also carried out for material gain. Plundered property and assets helped fuel the ISIL economy, while videos of executions and destruction of religious sites fed the fervour of its core supporters.

By the time ISIL was defeated in Iraq, the Christian community, who had once totalled 1.5 million – about 3 percent of the Iraqi population – was reduced to a few hundred thousand. Other communities, like the Yazidis, have also been decimated.

Helping these minorities recover and rebuild their lives in Iraq has to go beyond interfaith dialogue. It means providing physical and economic security for their communities which cannot happen while the Iraqi state continues to experience instability and its cohesion is constantly undermined by foreign forces.

Indeed, religious leaders have to do their part. And in this sense, Pope Francis’s visit to Iraq is a significant undertaking that could help improve conditions for Iraqi minorities. But ultimately, their fate will be determined by the ability of the Iraqi political elite to resist foreign pressure, build a stable and functional state, distribute the country’s wealth to its people and ensure their safety and security.

The views expressed in this article are the author’s own.

Ibrahim al-Marashi is an associate professor at the Department of History, California State University, San Marcos.

Original Headline:  Pope Francis’s visit to Iraq: Beyond the symbolism