Other than populism and petty politics, the decision by Turkish President Recep Tayyip Erdogan to convert Istanbul’s Hagia Sophia from a museum into a mosque remains unfathomable. Erdogan ignored global pleas not to pursue the change, including from UNESCO and Pope Francis, who said that he was “very saddened” by the conversion. 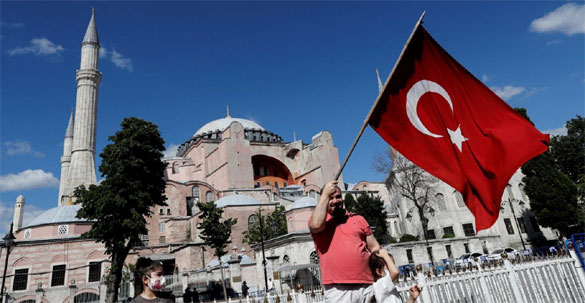 Hagia Sophia, or Ayasofya, after a court decision paving the way for it to be converted from a museum back into a mosque, in Istanbul. (Reuters)

Historically, the Vatican and the Catholic pontiff would have loved to see their rivals — Hagia Sofia and its Orthodox emperor and patriarch — beaten. But that was when popes were politically active. Today, popes, in the political sphere, play a ceremonial role encouraging peace. Either way, Erdogan’s decision to invite Pope Francis to the conversion ceremony shows the Turkish president to be clueless about history and unaware of the sensitivities his demagoguery creates. Not only does Erdogan want the pope to attend an event where the Turkish president anoints himself as the conqueror sultan by recreating the Islamic takeover of one of the world’s most famous churches, he also wants him to watch how Turkey covers up Christian symbols to allow Muslims to pray in the building.

But, not to worry, Erdogan’s aide Ibrahim Kalin told CNN: “We are making some arrangements to ensure that, during Muslim prayers, the mosaics will be covered but not touched.” He added: “The main point here is that there is no damage to these mosaics, depictions, the historical texture and architecture of the building.” So, unlike how the Ottomans destroyed parts of the church and plastered over its frescoes and mosaics, Erdogan’s conversion is reversible, more like a game of smoke and mirrors that describes his politics in general.

Covering historic Christian symbols in the most-visited building in Turkey will take away from Hagia Sophia’s tourism value, but will not add anything to the spiritual experience of Muslims who will pray in the former church.

Erdogan seems unaware that — unlike Islam’s divine shrines in Makkah, Madinah and, to a lesser extent, Jerusalem — Hagia Sophia has no significance in Islam whatsoever. In fact, Ottoman conquerors turned it into the sultan’s mosque as a proclamation that a new sheriff was in town, but otherwise did not even bother to Islamize its Christian name.

To Christians, however, Hagia Sophia has immense religious value. To start with, Constantinople is one of the five seats of Christ, together with Jerusalem, Alexandria, Antioch and Rome. Constantinople was Christianity’s New Rome. The city was built by Constantine the Great, who made Christianity the official religion of the Roman Empire. Over the span of a millennium, Hagia Sophia saw generations of Christians holding Mass, ceremonies and prayers in its halls. Relics of saints were buried in its gardens, while frescoes depicting Christ, Mary, the disciples and saints were painted on its walls.

Then came the Ottomans, who warred in the name of Islam. The Turks themselves were originally heathens who converted to Islam as they migrated west from Central Asia.

Erdogan dedicated converting Hagia Sophia into a mosque to the Islamic civilization, “from Bukhara to Andalusia.” But, by the time the Ottomans conquered Constantinople, the two extremities of the Muslim empire had long since gone. No matter how some Turks imagine their history, their civilization is a relatively young one, like America. It was around the same time as Christopher Columbus was invading America that the Turks were invading Anatolia and Constantinople. But why the world is always angry at Columbus for invading indigenous-held lands but oblivious toward the Ottoman invasion of Greek lands is anybody’s guess.

Erdogan is trying hard to impose a history where the Turks are imagined as the leaders of Islam and the rulers of the world. But his narrative is inaccurate. The Turkish leadership of the Muslim world, if such a monolithic bloc ever existed, was always disputed by the Hashemites of Makkah, by the sultans of Oman and Zanzibar, by the Saadi and Alawite dynasties of Morocco, by the Mamluks in Cairo and by the Safavids in Tehran. Ottoman sultans were never the undisputed leaders of Islam, just like no single emperor could ever claim the mantle of leadership of Christendom.

Ever since his rise to power, Erdogan has been obsessed with his global image and his argument that “the world is bigger than five” — that is, the five permanent members of the UN Security Council. Erdogan repeatedly tried to get Turkey added to the five to show Turks that he had revived their empire’s past glory. Having failed on that front, he seems to have abandoned the UN and is trying instead to recreate an Islamic empire with him at its top. Converting Hagia Sophia into a mosque is part of Erdogan’s dream of imperial dominance in the name of Islam.