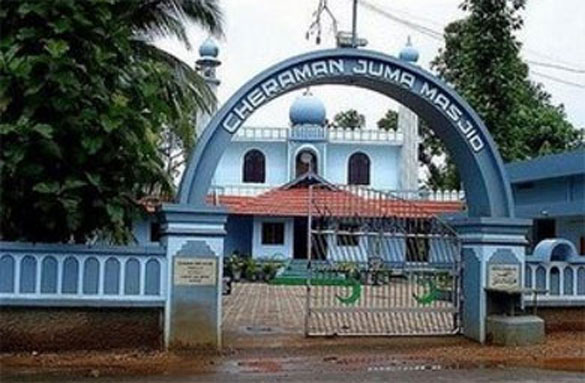 On India's western coast, facing the Arabian Sea, there once lived a Hindu king who had a vision of the Moon splitting into two halves. Concerned that the dream was a warning, he immediately asked his court astrologers to interpret what he had seen.

They couldn't provide an explanation that would satisfy the king so the problem remained unsolved until a group of Arab traders arrived at his port, in what is now India's southern state of Kerala. The traders explained that the king's vision was most likely a reference to one of the miracles performed by the Prophet Muhammed.

Convinced, the king converted to Islam and set off to Mecca, Islam's holiest site. He died before he could return to his kingdom, but left instructions to build what would become India's first mosque.

That At Least, Is How The Myth Goes.

The actual history of the Cheraman mosque in the town of Kodungallur is murkier. According to a foundation stone on its premises, the mosque was built in AD629, but the evidence is conflicting.

Historian Rajan Gurukkal, who is originally from Kerala, says that the mosque was probably built closer to the 11th or 12th centuries. But Mohamed Sayeed, the president of the mosque's managing committee, says tradition maintains that it was the first in India.

Kodungallur is about an hour north of Kochi city, a popular tourist destination, but few foreign visitors come here. The state government, however, hopes that will change as it embarks on an ambitious project that will highlight the area's history.

Known as the Muziris Heritage Project, it stretches across seven panchayats (village councils) in the state, with 27 museums and more than 50 sites of interest planned, ranging from a spice museum to an excavation site where shards of Roman amphorae and Italian ceramic ware have been found.

In the first phase of the project, the state government has restored two synagogues and opened them to the public.

In a state with a large proportion of religious minorities - combined, Muslims and Christians form nearly half of the state's population - the state government hopes the historical sites will push a message of religious harmony.

The Cheraman mosque's appearance - baby blue with a coral tile roof, two minarets and a spacious courtyard - belies its age. It has been subjected to a series of renovations over the centuries.

It remains an active place of worship. Many of Kodungallur's more than 7,000 Muslim residents worship here, as do some Hindus.

"In the dusk and the early morning, you can see a lot of Hindus coming over here and praying here," Sayeed explains.

There are many other places of worship nearby. Fifty metres away is a Hindu temple, and there are at least five churches in the area.

Of more historical interest are the Paravur Synagogue, one of the oldest Jewish places of worship in the country, which is 10km away, and Kottakavu Church, one of the country's earliest churches, 8km away.

All are part of the heritage project, which started in 2009 and completed its first phase last year.

Those behind it say the close proximity of these different places of worship offers an important lesson for the world today.

"We're setting an example that all these people can co-exist without any problems," explains the project's senior consultant, Benny Kuriakose. "We want to put forward Muziris as an example of [religious] harmony."

Resident Antony Deign says multiculturalism continues to thrive in modern-day Kodungallur. "Kodungallur is the rarest of places, if you think about Hindus and Muslims and Christians living here," he says.

Deign, a practising Catholic, says he grew up going to temples with his Hindu friends. Any time there was a festival or a celebration, he would go with them. "It was a part of our culture," he reflects.

UK Viswanathan was born and raised in Kodungallur, but left his hometown to work in India's financial capital, Mumbai, in 1969. Forty years later, he returned.

Despite "all the facilities" a city like Mumbai could offer him, something drew him back to Kodungallur.

"We have got very good communal harmony," he says. "That's the very reason that I came back."

It's a sentiment that seems to be at odds with some other Indian states, where the right-wing Bharatiya Janata Party (BJP) of Prime Minister Narendra Modi and its allies are trying to curb the sale and consumption of beef and where those accused of killing cows have been lynched by hardline Hindu cow-protection activists known as "gau rakshaks".

A Need For Spice

The origins of Kodungallur's celebrated religious harmony lie in one ingredient: black pepper.

Alhough black pepper is today found in kitchens all over the world, 3,000 years ago, traders travelled long distances to Muziris, a port town at the mouth of the River Periyar, to trade pepper and other spices.

The earliest traders were Egyptians, in the time of King Solomon (900BC). Later, Greeks, Phoenicians and Arab traders, pre-Islam and post-Islam, also came, according to Gurukkal, the author of Rethinking Classical Indo-Roman Trade.

Some of these traders, he explains, ended up settling in Muziris out of necessity.

Around the first century, foreign traders started using the monsoon winds to sail to India in a relatively short period of time. These winds had a natural rhythm that the traders followed, sailing in on one wind and sailing out a few months later when the winds changed.

While waiting, Gurukkal says: "Naturally some of them might have made temporary arrangements, taken local spouses."

This practice lasted for a few centuries. But later on, others, such as Syrian Christians, arrived and built their own places of worship with the permission of the local ruler, creating what we might today call cosmopolitanism.

Despite the fact that these diverse groups lived so close together, there were no religious tensions, Gurukkal says, because they were not economic rivals. They all wanted different products from the port town. Conflict only came in the 16th century, with the arrival of the Portuguese, who sought an economic monopoly, he says.

By then, though, Muziris was no longer the epicentre of trade. The port was devastated by a flood and earthquake in the 14th century, and the centre of commerce shifted south to Kochi, which today remains the largest commercial centre in the state.

Kodungallur's history wasn't well known until the early 2000's when, after some rain, locals found colourful beads in the mud. News of the find eventually reached archaeologists, who started excavating the area in 2007.

Over the course of several years, they recovered more than 95,000 objects, ranging from glass beads to fragments of pottery pieces from Mesopotamia, modern-day Iraq.

The state government came forward to fund a large-scale restoration project. The UN cultural body, UNESCO, is funding a separate project focused on the cultural connections between ancient cities that traded along the spice route, an ancient network of sea routes that connected the East and West. India is one of 31 countries participating.

Nine years into the restoration project, much work still remains to be done, explains Kuriakose. Phase II will start in May, and it is likely to take several more years until the project is completed.

Today the "first emporium of India", as Pliny the Elder, a Roman author from the first century called Kodungallur, is a shade of its former cosmopolitan self.

Once a place that exported great quantities of pearls, ivory, silk and spikenard, an ointment, from the Ganges and malabathrum, another aromatic ointment, from the interior to the rulers of Rome, the closest modern-day market now caters only to locals.

While only a few of Kodungallur's Jewish residents remain - many of them left for Israel in the 1950s - the area's multiculturalism remains.

Viswanathan, who is Hindu, recently went on a pilgrimage to a local Hindu temple. After praying at the temple, he went to the nearby mosque. There, he says, the imam asked him his name before reciting some verses of the Quran.

"I was enthralled by that feeling [that] a Muslim priest was blessing me," he recalls. "I had all the blessings in the world during those five seconds."

Huizhong Wu is a reporter and producer based in New Delhi, India.