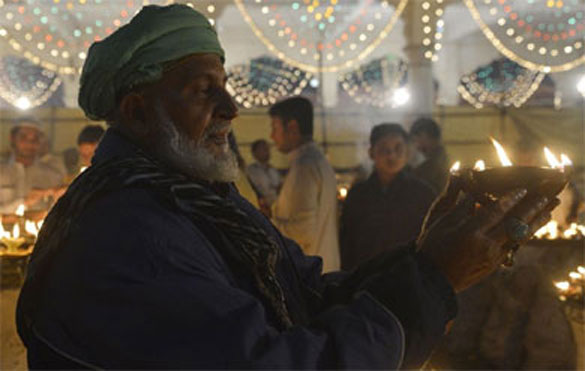 The long turret of a temple rises unexpectedly amid tall minarets and round green domes in a busy area. It stands like a reminder of an unwanted past, a memory we would like to bury deep within our communal subconscious, afraid it might challenge how we want to see ourselves. The top of the turret carries a scar of battle that has been fought several times, between two groups locked in perpetual conflict.

The latest round of this battle roar its ugly head on a cold December morning in 1992, when passionate supporters of Jamaat-i-Islami and others not attached to any political party surrounded this temple, determined to bring it down to avenge the demolition of the Babri Masjid about 1,000 kilometres from here in a country they fought tooth and nail to separate from, but one that continues to be an obsession. The temple, however, stood its ground. It was not willing to concede the space it had occupied for several centuries. It was not ready to hear that it did not belong in this new country. It eventually won the battle – the mob lost interest and left, while the residents of the area who had evacuated the temple upon the mob’s arrival returned to their homes.

Bheru da Sthan or the abode of Bheru is one of the oldest standing temples in Lahore, an ancient city believed to have been founded by Lav, one of the twin sons of Ram and Sita. The temple was built on the spot to which Godar, Prince Dara Shikoh’s treasurer, was brought after being rescued from the dungeons where he had been kept after he was caught deceiving the prince. Godar was visited in the dungeons by a man who later identified himself as Bheru. The man asked him to shut his eyes and brought him here. A free Godar started living in Shah Alami area in Lahore and constructed a small temple here at the spot he had last seen Bheru.

The temple was given its contemporary shape (including a vast complex and several rooms) during Maharaja Ranjit Singh’s rule over the Sikh Empire in the 19th century. The Maharaja’s Muslim concubine, Mora, gave Rs 1,400 for the temple’s construction. When Mora’s mother had taken seriously ill, all the hakims and healers failed to cure her. She was then informed of a man who lived in this temple, a descendant of Godara and a magician, who exorcised the djinns from Mora’s mother. As a reward, Mora summoned bricks from all the 100 villages that had been granted to her by the Maharaja for the construction of this temple and donated money.

The mob in a frenzy to bring this temple down may not have known that it was constructed thanks to the generosity of a Muslim. Even if they were made aware of it, the story would have been rejected as an anomaly because it would not have fit the framework that they use to understand history. In this framework, Muslims can only destroy Hindu temples and Hindus do the same to Muslim shrines.

Just outside the walled city of Lahore is one of the most important Sufi shrines of the city, Data Darbar, dedicated to the city’s patron saint Hazrat Data Ganj Bakhsh. This shrine lends Lahore its monker of Data Ki Nagri, or Data’s city. About 1,000 years old, the shrine has witnessed the evolution of the city – the arrival of the first Muslims, the construction of the walled city under Malik Ayaz, the governor appointed after the Mahmud of Ghazni’s invasion and its transformation from a small town to a grand urban centre under Mughal emperor Akbar. The shrine stood its ground through the rise of the Khalsa Empire, the emergence of the colonial bureaucratic state and the transformation of the city from a multi-religious metropolitan to a Muslim-dominated city that saw the exodus of Hindus and Sikhs during Partition and the erosion of their religious symbols.

In post-Partition Lahore, it emerged as the most important shrine in the city. In the new state, with increased symbolic significance came political patronage. From ZA Bhutto to General Zia, Benazir Bhutto and Nawaz Sharif, all made multiple visits to the shrine and contributed to its extension. A vast courtyard was constructed around a small shrine, including a basement for Qawwali, a madrasa and a library. The tall minarets of the mosque behind the shrine are a part of Lahore’s iconic skyline that includes Badshahi Masjid, Lahore Fort, Minar-i-Pakistan and the Samadhi of Ranjit Singh.

Data Darbar did not always enjoy this social and political significance. For much of its long history, it was only a modest structure even as state patronage was extended to other Sufi shrines of the city, including that of Mian Meer, believed to be the patron saint of Dara Shikoh.

Once again defying popular perceptions, it was during the tenure of Maharaja Ranjit Singh that shrine began to grow. A library was built here, the first of its kind, with a vast collection of handwritten copies of the Quran. The religious texts were donated by Maharani Jind Kaur, Ranjit Siingh’s youngest wife who, after his death, briefly served as her young son Maharaja Duleep Singh’s Regent. This rare collection of handwritten Qurans brought many admirers to the shrine, gradually increasing its significance.

Today as thousands of devotees pay homage to the patron saint of Lahore every day, it is conveniently forgotten that a Sikh Maharani played a crucial role in the development of this shrine, just as the fact about a Muslim concubine of the Maharaja renovating a Hindu temple has faded from memory.

Haroon Khalid is the author of three books – Walking with Nanak, In Search of Shiva and A White Trail.