Lahore's 'Festival Of Lights': A Sufi Tradition Burning Bright In The Face Of Extremism, Puritanism 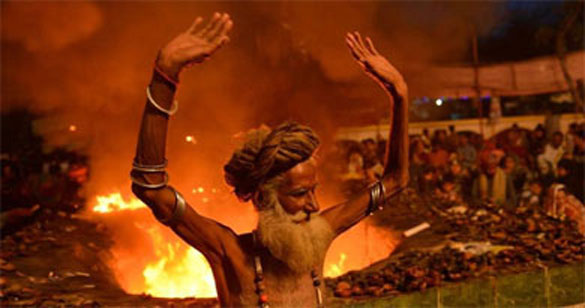 Outside a shrine dedicated to a Sufi saint lies what is perhaps the oldest fire in the ancient city of Lahore. It symbolises passion and eternity – two essential characteristics of a Sufi. Through passion, a Sufi merges with the divine reality and to be consumed by it – to be fana – he ceases to exist, merging with eternity. This obliteration is a central feature of Sufi saint Shah Hussain’s poetry:

Calling upon the name of my beloved (Ranjhan)

I myself became Ranjha

Call me Ranjhan for I am no longer Heer

Shah Hussain’s union with his beloved, the young Hindu boy Madho Lal, also exemplifies this love. Consumed by their passion, their individual identities dissolved and emerged Madho Lal Hussain. They are now always referred in conjunction. One cannot exist without the other.

And outside also He,

In every hair of mine

So intimate is He

However, before one can enter the shrine dedicated to Madho Lal Hussain, the fire outside demands an offering – in the form of a candle or lamp thrown into it. There are times when the eternal fire recedes. Like life, it has its ups and downs. But in Spring, during the Mela Chiraghan festival, it burns in full glory, threatening the canvas of the sky above us. The fire has survived for four centuries after the death of the Sufi saint and will continue to exist as long as Sufi dervishes sing and dance to the poetry of Shah Hussain. The fire gives this event its name – Mela Chiraghan, the festival of lights, a three-day celebration held every year in the end of March to mark Husain’s Urs, or death anniversary.

There was a time when Mela Chiraghan was celebrated along with the Basant festival of Lahore heralding then Spring season. This was the city’s largest celebration. But after Partition, as the country increasingly defined itself in opposition to Hinduism, it abandoned several festivals, most of which originated from the country’s non-Muslim past, shrouded in mythology.

This process of obliteration was much more rampant in the urban centres of the city. Infused with religious and nationalist fervour instilled at schools and colleges across the country, the middle class of the country undertook a self-purification process to become better citizens and religious devotees – considered overlapping concepts. Thus, the newly created country of Pakistan started abandoning several Sufi folk religious practices, due to their multi-cultural influences and syncretic nature. A search for true religion, represented by Puritanism, was the order of the day.

In the hinterlands, the situation was different. Devoid of the urban infrastructure of connectivity, education and media exposure, several such traditions survived in pockets. A shrine of phallic offerings, another for sacred dogs and one for holy cows in Pakistan’s South Punjab reflect this.

But the tradition of Madho Lal Hussain and Melan Chiraghan is an exception because it survived not in an obscure small town, but in Lahore, the second-largest and perhaps most developed city of the country, even several other folk traditions disappeared. Though no longer combined with Basant, which is slowly becoming a distant memory (last time it was celebrated in Lahore was in 2009), Melan Chiraghan is the largest festival of the city.

The shrine of Madho Lal Hussain is located in the heart of the city, facing the iconic 17th century Mughal garden, Shalimar Bagh. During the days of the Sikh Empire under Maharaja Ranjit Singh in the early 19th century, the festival received state patronage and Mela Chiraghan was celebrated inside this fabled garden. However, under the government of Ayub Khan, which ruled Pakistan from 1958-’69, the celebrations had to move across the road, to the shrine located in Baghbanpura, a historical community established for the royal gardeners of Shalimar Bagh. The shrine continues to attract hundreds of devotees every day and thousands during the festival.

The celebrations at the shrine are diametrically opposed to everything Puritanical. Before Partition, the revellers at the festival cut across religious lines. Even today, despite their dwindling numbers, Hindus and Christians, continue to attend this historical celebration. The beating of the Dhol accompanied by the Dhamal – the whirling and hypnotic Sufi dance – are an important part of the festivities. Many historians and anthropologists believe the Dhamal of the South Asian Sufi tradition originated from Shiva’s Tandava, the passionate dance of destruction. The dervish at the shrine, from a wide hue of orders, with their red and black Cholas, bangles, long braids and opium pipes, are more reminiscent of Shiva’s ascetics than their Muslim brethren. The whistle of the horn played intermittently by dervish reminds one of the echoes of conch-shells at Hindu temples.

Underneath this syncretism is the blatant class ghettoisation. For the elite and the middle class of the city the festival remains a relic of the impure past. To them, It is today a tradition not to be celebrated but rather tolerated as an eccentricity of the purportedly uneducated and ill-informed Muslims.

This is what makes the celebration of the festival, particularly in an urban setting, even more significant. It Its existence is an act of defiance, not just to religious extremism, but also to puritanical state narratives. Even if unconsciously, it celebrates Pakistan’s syncretic past and the dialectical frame shaping the complexity of the Pakistani society, sometimes standing in opposition to itself, contradicting its own broader narratives. The largest festival in the city of Lahore represents everything vehemently opposed by the state.

It is a testimony to a time when Lahore, the city of festivals, was as a multi-religious and cultural society. Mela Chiraghan is one of the last living traditions from a city that was in turn home to the Mughals, Ranjit Singh and the British Empire.

For now, the fire of Madho Lal Hussain continues to burn bright. How long will it survive in the face of a systematic onslaught?

Haroon Khalid is the author of three books, including Walking with Nanak and In Search of Shiva