The Judeo-Islamic Tradition Has Deep Historical Roots That Zionism and Islamism Have Tried To Erase: Yum Kippur and Ashura 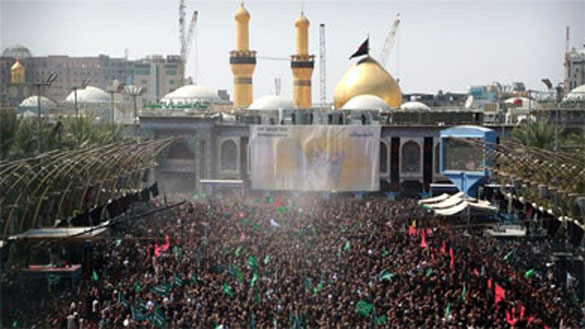 Shia pilgrims gather between the Imam Hussein and Imam Abbas shrines during the religious festival of Ashura in Karbala, Iraq, on October 1, 2017 [Reuters/Abdullah Dhiaa Al-Deen]

On the Gregorian calendar (so named after Pope Gregory XIII) this September, two of the holiest Jewish and Islamic high holidays coincide. On September 10, Jews around the world began their high holidays by commemorating Rosh Hashana which continues for 10 days until September 19, Yum Kippur. It is on that day that Muslims in general, and Shia in particular, commemorate the sacred day of Tasu'a and then a day later - Ashoura - the 9th and 10th of the Islamic month of Muharram respectively.

None of this is "the fault" of either the Jewish or the Islamic calendar. Given the way in which the Christian calendar has been imperially universalised, the other two may look erratic and confusing, but Jewish and Islamic high holy days are perfectly logical, routine, and regular.

The Twain Have Met

Both Jewish and Muslim observers have noticed this proximity between Yom Kippur and Ashoura. On the occasion of the two holidays coinciding in 2016, Rabbi Allen S Maller noted how "both holy days occur on the 10th day of the month, Muharram for Muslims and Tishri for Jews."

By way of explanation, he adds: "In ancient times the two branches of Abraham's house followed the same lunar-solar system of intercalating an additional month 7 times in a cycle of 19 years. Thus, the 7th Jewish month of Tishri coincided with Muharram; and the 'Ashura (10th) of Muharram synchronized with the 10th of Tishri, the Jewish Day of Atonement - a day of fast."

On the occasion of a similar concurrence in 2015, Haroon Moghul , a Muslim American writer and a fellow at the Institute for Social Policy and Understanding, wrote in a piece for CNN: "If you're wondering why Muslims would celebrate a Jewish holiday, that's because neither [Prophet] Mohammed nor the Early Muslims saw themselves as part of a new faith."

Both Maller and Moghul cite an authentic prophetic hadith, according to which Prophet Muhammad once encountered Jews in Medina fasting on the 10th of Muharram/Tishrei and joined them in their fast.

Thus the origin of this overlap in tradition is traced back to the time of the Prophet himself.

The similarities, correspondences and affinities of such aspects of Islam and Judaism are only strange or bizarre to those who have fallen into the trap of falsely projecting the Zionist colonial adventurism in Palestine backwards onto history and positing an entrenched hostility between Jews and Muslims.

Like Christianity, Islam is deeply influenced by Judaism and has an even stronger proximity to its theological monotheism. This is not a matter of opinion or ideological position. It is a matter of historical fact.

The infamous statement of former US president Barack Obama that "The Middle East is going through a transformation that will play out for a generation, rooted in conflicts that date back millennia," is typical of the ahistorical gibberish that manufactures hostility between Islam and Judaism, and perforce between Jews and Muslims. By making such declarations, Obama projects his own criminal role in prolonging the Palestinian suffering under Zionist occupation to some distant past that never was.

Much of the confusion and conflation of Judaism and Zionism, and particularly the false and pernicious extension of the charge of anti-Semitism against Muslims, have the same roots as this forced approximation of both Jewish and Islamic calendars to the Gregorian calendar - where Jews and Muslims are forced to see each other in Christian terms.

Contrary to "the Judeo-Christian" concoction (contested and contradicted by a long history of Christian anti-Semitism), the idea of Judeo-Islamic tradition is not based on any political or ideological project but evident in the most robust period of Jewish and Islamic philosophies that is unrivalled in any other tradition.

Consider the fact that saying these Jewish and Islamic holidays is on such and such days in September is entirely meaningless to both Jews and Muslims and the inner rhythm of their own respective calendars. We are forced to do so because we are writing in English (as opposed to Hebrew, Arabic, Persian, Turkish, Urdu, etc.) and using what is called "Common Era," or "Civic Calendar".

Both of these expressions are actually nervous and futile attempts to disguise the fact that we are all forced to use an imperial Christian calendar, which is ipso facto a distortion of the time and narrative of both Jews and Muslims and which approximates them to a dominant Christian temporal order.

As a European colonial project, Zionism was formed in a decidedly Christian context and its endemic anti-Semitism - most violently evident in the course of the Crusades - of endless pogroms and, ultimately, the Holocaust.

But before and beyond the Zionist abuse of Judaism (similar to the Islamist abuse of Islam in Iran and Saudi Arabia, or colonial abuse of Christianity in the US, the fundamentalist abuse of Hinduism in India, or the nationalist abuse of Buddhism in Myanmar), there is an enduring and historically grounded proximity to the Judeo-Islamic heritage which started even before the Golden Era of Andalusia.

This Judeo-Islamic philosophical tradition was real and not created out of any political convenience or necessity. Today, militant Zionism, puritanical Islamism and evangelical imperialism are collectively invested in concealing these historical facts and either denying or else catapulting the profound heritage of Judeo-Islamic philosophy back into "ancient times".

Racist, Islamophobic, xenophobic anti-Semites like Steve Bannon (a strong advocate of Israel) now use the term "Judeo-Christian tradition" as a subterfuge to fabricate a common religious foregrounding for anti-Muslim bigotry. There is an entire bloody history of Jewish suffering defying that hyphenated delusion of "Judeo-Christian" heritage.

How could a racist, Christian-Zionist anti-Semite lay a claim on any "Judeo-Christian" heritage - except as a ridiculously transparent Islamophobic trope?

The fact of the Judeo-Islamic tradition, however, is far more potent historical evidence than semi-literate propaganda officers like Bannon and his ilk can even fathom, let alone contest.

Three complementary ideological fanaticisms are chiefly responsible for the sustained bifurcation manufactured today between Islam and Judaism - all of them handmade by European colonialism, all of them invested in denying and dismissing the legacies of the Judeo-Islamic tradition. Militant Islamism, fanatical Zionism and Christian imperialism are the triangulated foregrounding of fear and fanaticism that has wreaked havoc in our world and systematically and consistently distorted the clarity of our historical visions.

Fanatical Islamism, settler colonial Zionism and imperial evangelicalism are chiefly responsible for this manufactured rift between Judaism and Islam against the historical grain of their proximities. And precisely for that reason, any legitimate criticism of Zionism as a racist colonial project that spills over into a racist attack on Judaism and Jews is falling fast into the Zionist trap and by definition is anti-Semitic.

Of course, what has historically exacerbated the mutual impacts of Islamism and Zionism is the course of Christian imperialism, now best represented in the racist malignancies of the likes of Steve Bannon. His brand of evangelical imperialism now actively presides over and exacerbates both militant Islamism and fanatical Zionism. Steve Bannon, Abu Bakr al-Baghdadi and Naftali Bennett are all cut from the same cloth.

To state and repeat the obvious: not all Zionists are Jews and not all Jews are Zionists. Christian and now even Muslim and Hindu Zionists are among the wealthiest and most powerful, sustaining the calamitous course of the colonisation of Palestine.

That is the end of the false and deliberate Zionist conflation of their violent state ideology with Judaism - precisely on the model of the abuse of Islam and Muslims by Islamist ideologies now ruling in Iran and Saudi Arabia. In their mutual hostilities against each other, they are in fact steadfastly united with each other in robbing Judaism, Christianity and Islam of their shared legacies, blinding the world to reason and sanity.

The idea of a much closer proximity between Islam and Judaism than now deliberately clouded by the Zionist colonial project does not mean historically there has not been a relation of power between the two world religions.

From its very inception, Islam has been definitive to multiple and successive world empires - in which (from the Umayyads and the Abbasids to the Safavids and the Ottomans) Zoroastrian, Jewish, and Christian communities have lived. There could not have possibly been any equality between the ruling elite of the powerful Muslim empires and these small minorities in their domains.

The fates of both Judaism and Islam have been pitted against each other in the context of European colonial conquests in Arab lands, giving almost simultaneous birth to militant Zionism and triumphalist Islamism - one as a colonial and the other as an anti-colonial project of violent state-formation.

Militant Islamism and bellicose Zionism are coterminous with the Christian imperialism that frames them both. All these three triumphalist ideologies are morally bankrupt projects.

The task at hand is how to save Islam, Judaism, and Christianity - as three world religions and concurrent frames of our moral imagination - from the claws of so many decades of epistemic abuse.

The concurrence of Yom Kippur and Ashoura this September is a gentle reminder of a much different history than the one mandated in Palestine and beyond by the malignant disease of European colonialism.

There is nothing wrong with Muslims celebrating a Jewish holiday while commemorating their own most sacrosanct days. There is nothing wrong with Jews looking at a Muslim holiday and seeing the distant mirror of their own ancient beliefs. If either of those two sentences sounds odd today, we need to overcome both fanatical Zionism and militant Islamism, upend Steve Bannon's Christian imperialism, so we can remember and retrieve a history of the world now hidden under the heavy smokescreen of fanaticism, ignorance and greed.

The views expressed in this article are the author's own