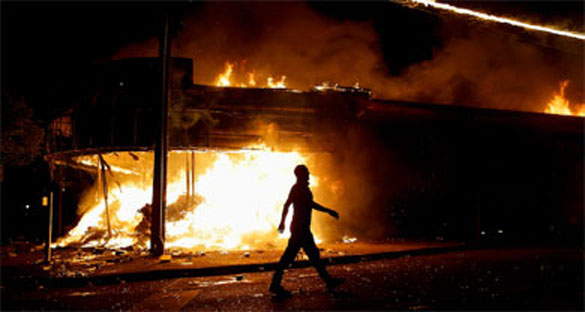 A protester walks past the burning Minnehaha Lake Wine &Sprits store in Minneapolis, around the corner from the Gandhi Mahal restaurant.

On Monday night, as I am driving to work at Gandhi Mahal, my family’s Indian restaurant, I see the police arresting a man near Cup Foods in South Minneapolis.

I slow down and watch the man. He’s being walked away in handcuffs, and he’s complying, but I still watch worried from my car, worried at what I see happening and what might happen next to a black man in police custody. I remember this man’s face well. It sticks with me. He was crying, and he was in pain.

Minutes later, George Floyd is dead in the hands of the police. Dead like Breonna Taylor and Philando Castile and Michael Brown and Freddie Gray.

Over the next few days, I watch the protests and witness the anger of the people over Floyd’s unjustifiable death. People flood the streets, crying “Black lives matter!” and “I can’t breathe!” It feels so close to home; Gandhi Mahal is just blocks away from the 3rd Precinct. My father opened his Indian restaurant as the Great Recession hit. It weathered that crisis, becoming a hub for community activism, particularly on climate justice, along the way. It weathered the start of this pandemic, even as the community it built contracted.

The protests grow, and the growing pains come, too. As violence starts to break out, part of our building becomes a makeshift safe house, dedicated to helping protesters who have been injured. Volunteer medics post up among tables shoved aside to make room for tending the tear-gassed and laying out the rubber bullet-stricken. My father grew up under Bangladeshi dictatorship, and he had friends killed by police, so he knows what to do. We figure this is the best thing way to stand with the demonstrators now. We feed them Daal for good measure.

It’s Thursday night. Away from the action, I watch the protests on a live stream. I watch a fire that has been set in the building next to our restaurant. I watch the flames lick closer and closer to the building that holds inside it my family’s livelihoods, everything my father worked for, the just minted memories of helping these same protesters. I can’t watch anymore. In defeat and anger, I go to bed.

It’s Friday morning. I awake to a phone call from a former employee of the restaurant. My heart stops racing and just starts skipping as she tells me that the restaurant is gone, burned to the ground in last night’s fire.

First: anger. I am angry for my dad, for all he worked for gone up in smoke. When I go to check on him, I see the pain in his face. The collection of local art, the microfarm in the basement, lost in the blaze. He watches the news some, and talks some on the phone, to media and family and friends. Then I overhear him: “Let my building burn. Justice needs to be served. Put those officers in jail.”

Suddenly: realization. It becomes clearer to me than ever that the issue at hand is greater than Gandhi Mahal. We can rebuild a building, but we will never reclaim the life George Floyd didn’t get to live. For years, protesters tried peace. It didn’t work. If this is what it takes to get justice, then it will have been worth it.

The anger of our community and of the protests here is undeniable. More than that, it is understandable. Yes, it is always painful to see destruction of any kind, and it hurts in particular to see something you worked so hard for become cinder and ash overnight. I support peaceful protest above all — look at our restaurant’s namesake — and I don’t mean for my family to promote violence. But after the flash of pain, it is important to name what is happening to cause this in the first place, and to empathize with the fury and frustration of the people it’s happening to.

The protests and the violence and the fires will stop once we’re rid of this system that oppresses, and maims, and kills people like George Floyd. So, let it burn.

Hafsa Islam is the daughter of the owner of the Minneapolis restaurant Gandhi Mahal.