'All Faith Traditions And Their Various Denominations Can Lead One To The Same Ultimate Reality," Assert Islamic Theologians In Hamdard Seminar

1.      Proponents of pluralism believe that all faith traditions and their various denominations can lead one to the same Ultimate Reality….

2.      Viewed from an Indian perspective, pluralism is a spiritual path which shows that there is not only one way to eternal salvation….

3.      The question emerges: Is Islamic theology in India ready for religious pluralism?

4.      The department of Islamic Studies in Jamia Hamdrad organized an international seminar to address key questions on pluralism in Islam from the Indian perspective.

5.      Several HoDs of the Islamic Studies departments in various Indian universities have expressed their determination to hold more seminars on such important topics. 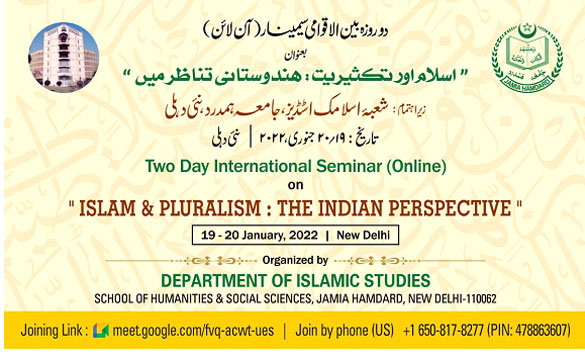 The Pluralism Project of Harvard University defines pluralism as “dialogue-based and focused on the energetic engagement with diversity, an active seeking of understanding across lines of difference, and the encounter of commitments”.

The proponents of pluralism believe that all faith traditions and their various denominations can lead one to the same Ultimate Reality—which is Unity of the Divine and Oneness of Mankind—which is interpreted differently by diverse religions and theological traditions, and that no single religion is the sole proprietor of the Divine Truth. In other words, the “Truth is One, and the Wise call it by many names”, as a famous shloka goes in Rig Veda Samhita (1.164. 46).

Viewed from an Indian perspective, pluralism is a spiritual path which shows that there is not only one way to eternal salvation. But rather, various religions have been revealed in various times and geographical locations as different paths to the same Ultimate Reality. According to this definition of pluralism, Islam in India came as one of the many, and not just one, ways to achieve eternal salvation. It came as a spiritual path to develop close personal relationship with the Divine, rather than an ideology of political dominion. This rendition of pluralism also calls for an interreligious scriptural dialogue based on the shared values, theological cooperation, and spiritual symbiosis by not just tolerating but also respecting and accepting the ‘otherness’ of others.

Thus, religious pluralism, going by this definition, would imply an intellectual project to bring about not just integration but also assimilation of various faith traditions in India. It appears to be not only a matter of peaceful coexistence and toleration but more of an amalgamation and accommodation of each other’s traditions. Now, the question emerges: Is Islamic theology in India ready for religious pluralism in this sense? Are the Indian Islamic theologians open to accept and accentuate the theological pluralism which eliminates the possibility of a specific, historical divine revelation being the only supreme source of guidance? More fundamental question is: If pluralism is the right way to live in the 21st century, then why can Islam not reconcile with the primal doctrines of the major world religions—especially the Indian-origin faith traditions?

These questions become more relevant in the context of the composite culture in India where Islam and Hinduism—the two apparently irreconcilable religions— have lived together for almost 14 centuries, with an increasingly strained relations recently due to a volatile political atmosphere. In a first of its kind academic endeavor, the department of Islamic Studies in Jamia Hamdrad, a deemed university in Delhi, organized an international seminar/webinar seeking to address these key questions on pluralism in Islam from the prism of India.

Two-day international seminar titled as, "Islam and Pluralism: An Indian Perspective" organized by the Department of Islamic Studies, Jamia Hamdard concluded with a stimulating valedictory session on 20th January, 2022. Around five technical sessions of the seminar were aimed at highlighting the common grounds between Islam and other Indian religions in particular, and the Semitic and non-Semitic faith traditions in general.

In the opening ceremony, the chief guest of the seminar, Dr Ahmad Abdur Rahman Al Banna (Ambassador of UAE to India) greatly appreciated the initiative by the department of Islamic studies of Jamia Hamdard and its venture to foster interfaith harmony and understanding in the academic arena. After he extended his congratulations to the organizers of the Seminar and his best wishes and compliments for its future efforts towards interreligious dialogue, Dr Al Banna shed light on the ambitions and efforts of UAE to promote pluralism and progressive values in the Gulf countries, which he said, are setting an example to emulate for other Muslim nations. 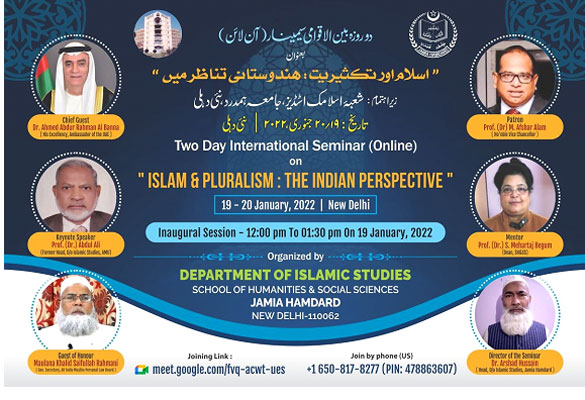 Around sixty papers were presented in different technical sessions running on parallel for two days in which different aspects of the subject were concisely covered. The papers presented in the seminar will be published by the department of Islamic studies of Jamia Hamdard, according to the seminar convenor, Dr Waris Mateen Mazhari, Assistant Professor of Islamic studies, Jamia Hamdard.

Apart from a considerable number of distinguished paper presenters from within the country, a gamut of scholars and ulema from abroad also took part in the various sessions of the seminar. These included Dr. Omair Anas (Turkey) on "Islam and Plural Societies", Dr. SherAli Tareen (USA) on "Political sovereignty and interreligious relations", Shaykh Dr. Fakhruddin Owaisi (South Africa) on "Islamic Pluralism in India: Motivations and Background", Mr. Mohammad Afzal (London) on "Relations between Muslims and Non-Muslims in the Prophetic Era and the Rightly Guided Caliphate Period", Mr. Mohammad Seraj Ahsan (Turkey) on "Significance of MultiCulturalism in Peace Building and Conflict Resolution in Globalized World: An Analytical Study of Islamic Perspective", Dr.Talha Rehman (UAE) on "Democracy, Pluralism and the Role of Islam in India".

A few of the above paper presenters have also expressed their views and reflections on the conclusion of the seminar, as follows:

Dr. SherAli Tareen (Associate Professor, Religious Studies, Franklin and Marshall College) who recently authored "Defending Muḥammad in Modernity", sent across his feedback in these words: "Many congratulations to all organizers and presenters for a wonderful conference on an urgently important topic......"

Another scholar and participant in the seminar, Dr. Ziauddin Falahi (Aligarh Muslim University) who presented his paper on "Relevance of Interfaith Dialogue: A Study of Tabeenul Kalam" appreciated the initiative as below:

"Congratulations to all the Islamic Studies fraternity. The Department of Islamic Studies Jamia Hamdard, Delhi deserves our special thanks that led our attention to a very timely foundation of the thought process of Pluralism. As sincere citizens, we should perspire ourselves to save the country on research grounds....."

Many participants and paper presenters like Dr. Sumaiyah Ahmed (Jamia Hamdard) stressed the need to compile all the presidential addresses along with the observations and comments on the seminar. According to Dr. Najmus Sahar, the seminar coordinator, the papers of the seminar will be published in a book at the earliest possible.

The valedictory session was addressed by Prof. Iqtdar Muhammad Khan (Jamia Millia Islamia) and Prof. Fahim Akhtar Nadvi (Maulana Azad Urdu University, Hyderabad). Prof. Iqtdar Mohammad Khan termed this initiative as the urgent need of the time and discussed various aspects of the subject. He lauded the Seminar as the glorious beginning of healthy debates and discourses on the theme, and laid greater emphasis on the need for an intra-faith dialogue for ‘pluralism within Islam’ which he said, is more crucial at the moment.

Prof. Faheem Akhtar, while giving a very comprehensive analytical commentary on the papers presented in the seminar, pointed out the areas which need to be the focus of attention for the Islamic scholars. He said that this seminar is an important model for other seminars organized by the departments of Islamic Studies. Dr. Muhammad Ahmad Naeemi (Jamia Hamdrad) whose paper was presented in Urdu under the title, “An Analysis of the Common Grounds and Values between Islam and Hinduism” presented the report of the seminar. Prof. Mehrtaj Begum, Dean, School of Humanities and Social Sciences and Dr. Arshad Hussain, Head of the Department, expressed their determination to hold more seminars on such important intellectual topics.

A regular columnist with NewAgeIslam.com Ghulam Rasool Dehlvi is an Alim and Fazil (a classical Islamic scholar). Having graduated from a leading Islamic seminary of India, Jamia Amjadia Rizvia (Mau, U.P.), he is now pursuing his PhD from Jamia Millia Islamia, New Delhi.