How a Muslim and a Hindu Became 'Blood Brothers' 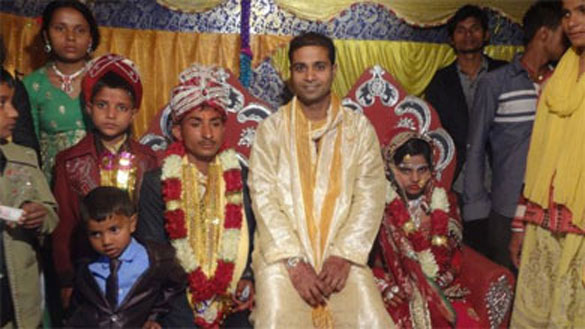 Gani Ansari (centre, in yellow), at the wedding of his blood brother Ram Narayan (centre, in wedding dress)

I am Muslim and a journalist. So news of violence and hatred between Muslims and those of other faiths is never far from my mind.

But my Nepalese "blood brother", or "mit" as it is known in our language, is a Hindu. Our friendship is known as a Miteri friendship - a special friendship decided by our grandmothers over 24 years ago as part of a unique Nepali tradition.

This practice of Miteri or "blood brother" friendships dates back centuries to when Nepal was a series of tiny, sometimes warring kingdoms. These friendships were arranged as a way of transcending regional, religious or social differences.

My mit, Ram Narayan, and I were both five years old when our Miteri relationship was solemnised. Our grandmothers thought we looked alike and had agreed that Miteri relations between us would be a good idea.

There was a ceremony to establish our relationship as "blood brothers" - although there was no actual mingling of blood.

I was made to take a bath and wear new clothes just like Ram.

We had to sit together and eat the same sweets from the same plate. It is believed that doing so makes the friendship long-lasting.

We did not even know the meaning of "Miteri relationship" at that time.

Neither of us was aware of differences between our religious faiths nor did we care.

But religious differences matter a lot to some people in our community. Even today, there are still some people in my village, Bishrampur, who refuse to drink water that has been touched by a Muslim.

Nepal is a Hindu-majority country - about 80% of the population is Hindu, while about 4% is Muslim.

There are some Hindus who consider Muslims to be untouchables - that is, similar to those who are ranked lowest in the Hindu caste hierarchy - and try to avoid physical contact with them.

However, our Miteri friendship meant Ram and I could experience each other's cultures.

I, a Muslim, used to attend Holi, the Hindu festival of colours when I was in the village. Likewise, Ram always came to my home to celebrate the Muslim festival of Eid.

Despite the religious divide and issues of untouchability, we shared foods from the same plate - an unusual sight in our village.

I live a long way from my native village these days, but I still try my best to attend Holi celebrations with Ram's family.

For my sake, they buy only Halal meat for their celebrations, as that is the only type of meat I can eat.

But they never feel any type of uneasiness in doing so for the sake of my faith - something I appreciate very much.

I attended Ram's wedding, of course. I went to his home the day before the wedding.

His elder brother gave me a new suit, which Ram had brought for me, to check whether it fitted.

Then his sister-in-law, Arati Devi, asked me to wear Mehndi - henna which is put on the bride and groom's hands during the wedding.

I was surprised as it was Ram's wedding and not mine. I said: "Why should I - not a close family member - wear Mehndi?"

But she said I must be adorned in a similar way to my "blood brother". I could not refuse.

I felt shy as they applied the Mehndi - it was my first experience with henna.

And they began cracking jokes. Arati said: "I think Gani should also get married now." Then Ram added: "Dear Mit, if you are ready, my wife-to-be has unmarried sisters. You can choose one of them and both of us can marry at the same time!"

The wedding also led to a change though. I could no longer enter Ram Narayan's home.

This is because tradition dictates that the wife of Mit should not come in front of her husband's Mit.

Miteri relationships seem to be disappearing as times change. I feel as if Nepalese society is turning more self-centric, religion-centric and caste- and ethnicity-centric, one sign of which is the hate speech you can find on social media.

But there is still a reason for me to be happy. My 10-year-old niece has also been in a "Miteri relationship" for the last four years.

My niece, like me, is a Muslim, but her "blood sister" is a Hindu Brahmin.

I hope she will find a Miteri friendship, which transcends caste and religion, just as rewarding as mine.