For the first time in modern history, worshipers of God are not allowed to be where they should be. Is God unhappy with mankind? 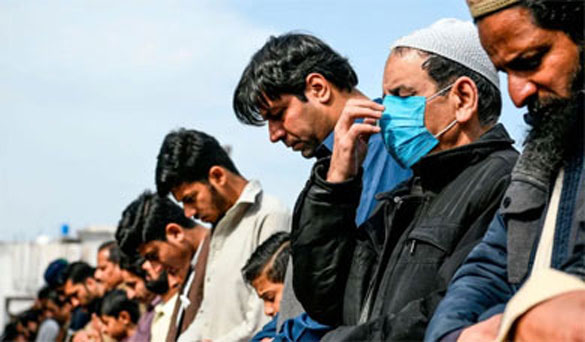 Maldivians pray together in the capital Male in the Covid-19 era. Photo: Facebook

According to legends, a time will come when the supplications, prayers and worship by mankind will be rejected by God. The sages believe that God will be unhappy when justice is denied, when atrocities against mankind increase, when rulers use their powers to suppress their subjects, when courts shun justice.

The Holy Scriptures, from the Old Testament to the Koran, warn about God’s punishment. History tells us of the great flood that drowned his earlier creation. But those who firmly believe in God also believe that God is most kind.

God could be punishing mankind with the coronavirus pandemic, according to religious conspiracy theorists who believe humanity has lost its way. The disease has boomed since it was first diagnosed in late December, with the World Health Organization officially labeling it a pandemic. The outbreak caught the world by surprise, and some people believe the coronavirus that causes Covid-19 was sent by God to punish humanity.

Strongly held apprehensions about the Covid-19 crisis around the world can also polarize and divide people. But prayer that seeks God’s answers brings less stridency and more listening, opens the door to wise and balanced solutions, and lifts thoughts from fear to hope. People all over the world have been saddened by the deaths due to Covid-19, lack of health-care facilities, and a looming economic crisis, and increasing uncertainty about the issue has engulfed the masses.

This issue and other world problems call for prayers that can make a difference. At first, praying about the Covid-19 crisis just seemed too complex to me. But the urgency of the situation was brought home to me when the virus took the lives of innocent doctors in hospitals in the United Kingdom, where I also work. I knew I needed to pray about the crisis, but where to start?

Can people of different religions, or different interpretations of the same religion, pray together? In religious history, that has been a very thorny question. The issue still excites passion. Ultra-conservative Catholics were dismayed by the willingness of Pope John Paul II to pray publicly with Muslims in Morocco, for example, and to acknowledge that Christianity and Islam have many things in common, including the privilege of prayer.

To help glimpse a more spiritual perspective on the Covid-19 threat, turning to religion may be what is required now. Both in Koran and in the Bible one can sense a long story of a people moved by their search to understand God.

In the aftermath of natural disasters and epidemic outbreaks, both the Koran and the Bible describe them as divine punishment visited by Allah upon the unbelievers. The theory of divine punishment would make more sense if Muslim nations were spared disasters and epidemics; however, they are not. This is why, when the victims are Muslims, clerics describe the same disasters as trials or tests of the Muslims’ faith – a religious concept that few devout Muslims dare to question.

In my opinion, two factors contributed to shaping the belief that epidemics and natural disasters are divine punishments for disobeying Allah or else tests of Muslims’ faith. First, stories that appear in the Koran and Hadith about nations that were annihilated by plagues and disasters because they disobeyed God or disbelieved in his prophets. Second, a sense of powerlessness coupled with a belief in a global conspiracy against Islam and Muslims.

The Islamic theodicy of understanding epidemic disease has more relevance now than ever before. Divine wisdoms as defined by Islamic theology, the jurisprudence (fiqh) related to epidemics and plague, are uncomplicated.

A brief historical timeline of epidemics in Mecca and Medina depicts an analytical breakdown of a plague prophesied by the Prophet Muhammad (may peace be on him) that occurred at the time of the companions and how they dealt with it, explaining the notion of Divine Decree in the case of epidemics. The Prophetic method of handling epidemics – preventive measures, spiritual aspects of overcoming calamities and difficulties, and prophetic prayers for epidemics and sickness – describes a comprehensive approach to how Muslims should confront afflictions.

Strongly held convictions about the Covid-19 crisis can cause emotional upheaval. But prayer that seeks God’s answers doesn’t promote one political agenda over another. It enables intelligence rather than emotion to guide us so wise and balanced solutions can be found. And prayer that lifts thought from fear to love fosters a world that is increasingly moved by love, not fear. Relative to the current pandemic crisis, this is not God’s abandonment wrath nor his cataclysmic wrath, rather it is sowing and reaping wrath.

When so many people are living in fear of the pandemic, we must come together as people of faith and seek the help of God. That God may have mercy on us, grant us strength and wisdom, and help us to be a people of hope. God needs to see and have us recognize that he is in control of everything.

Dr Fawad Kaiser is a professor, Fellowship Diplomate of the American Board of Psychotherapists, and a member of the International Association of Forensic Criminologists. He is currently a consultant forensic psychiatrist in the UK.

Original Headline: Time for different religions to pray together