Masjid Al Aqsa: The Holy Land Is Holy Because the Scriptures for the Jews, Christians and Muslims Proclaimed It Holy 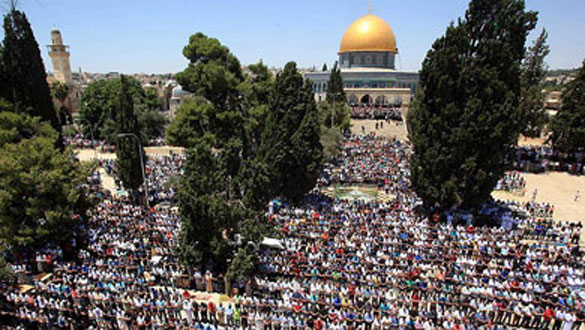 The Holy Land is the land between the Jordan River and the Mediterranean Sea and includes the current day state of Israel, Palestine and parts of Jordan and Syria. Jews, Christians and Muslims consider this holy for various reasons. Unfortunately the Holy Land is as much holy as it is controversial, and a subject of dispute and tension between Jews, Christians and Muslims.

The Holy Land is holy because the Scriptures for the Jews, Christians and Muslims proclaimed it holy. It contains the most sacred city for Jews and the third most holy city for Muslims- Jerusalem.

It is holy to the Jews because it is (or has in it) the “promised land”- the land that God promised Abraham and his descendants. It is the land that Moses and the Israelites searched and struggled to get to, for 40 years. (Ironically Moses never entered the Promised Land and the Israelites eventually entered it after his death, under Joshua’s leadership). It is the site for the first temple. The foundation stone at the Dome of the Rock is thought to be the site of the Holy of the Holies- the inner sanctuary of the Tabernacle. Hebrew prophets prayed while facing Jerusalem and to this date, Jews pray facing Jerusalem. That’s pretty holy.

It is holy to the Christians because it is the land of the birth of Jesus Christ. This is where he started his missionary. This is the site of the crucifixion. John the Baptist baptized Jesus in the Jordan of River. It is the site for the Sermon on the Mount. That’s pretty holy.

It Is Also Very Holy For The Muslims.

It was the first Qibla (where they face to pray) until the Qibla was changed to Ka’aba during the lifetime of Prophet Muhammad, while he was in the middle of a prayer in Medina. The city of Jerusalem is where Masjid Al Aqsa is, the third holiest shrine in Islam after Ka’aba and the mosque of the Prophet in Medina. Al Aqsa mosque includes the congregational Al Aqsa mosque and the dome of the Rock. This is the mosque mentioned in the Qur’an, when Prophet Muhammad took the night journey from Ka’aba to Masjid Al Aqsa and eventually to the heaven. The mosque and its precincts are blessed. The foundation stone at the dome of the rock is where Muslims believe Prophet Muhammad ascended to heaven on the night journey- Miraj.

Glory be to Him Who made His servant to go on a night from the Sacred Mosque (Masjid Al har’am) to the Masjid al Aqsa of which We have blessed the precincts, so that We may show to him some of Our signs; surely He is the Hearing, the Seeing. The Qur’an 17:1

And the LORD shall inherit Judah as His portion in the holy land, and shall choose Jerusalem again. Zechariah 2:12

The Holy Land is reportedly termed holy land-الأرض المقدس, (Al-Ard Al-Muqaddasah) at least 7 times in the Qur’an; the most direct was in reference to Moses and the Israelites.

And when Moses said to his people:

O my people! Remember the favour of Allah upon you when He raised prophets among you and made you kings and gave you what He had not given to any other among the nations. O my people! Enter the holy land which Allah has prescribed (ordained) for you and turn not on your backs for then you will turn back losers. The Qur’an 5:20-21

For Muslims, the holy land is holy from the Islamic perspective. The Qur’an considers it holy before Prophet Muhammad’s time. Being the original Qibla and his ascension to heaven from the Masjid Al Aqsa made it even more special.

It is worth keeping in mind that if a site is holy to Jews and Christians and “their” prophets, it’s holy to Muslims!

The million-dollar question then is: if it is so holy to the children of Abraham, why are we fighting for it? Sure, there is this land dispute, which is actually a matter of politics and human rights more than a religious battle, though it clearly has aligned people mostly on religious grounds. And yes, the dispute certainly has religious connotations.

I am certainly not offering the political solution to the dispute between the state of Israel and Palestine.  My plea is mainly based on our faith traditions.

It may sound very naïve, and it probably is very much so, but shouldn’t we work together to cherish the land-together? If a mother has three children, do the children need to fight to be the “rightful” loving child of the mother? If we love it, shouldn’t we work together to protect its sanctity? By fighting each other to be it’s rightful inhabitants, are we pleasing our patriarch, Abraham, to whom God originally promised the land? I believe the Holy Land should be a reason to work for peace, rather than fight for. You may say I am a dreamer, but I am not the only one(OK, fine I stole that from John Lennon).

After visiting the two holiest shrines in Islam (Ka’aba and the mosque of the Prophet in Medina), I can’t wait to visit the Holy Land. It would be amazing to be in the same zip code where Prophet Muhammad ascended to leave on the night journey. Walking in the same streets where Jesus once walked and preached would be awesome. Entering the land that God promised to Abraham and what Moses searched for 40 years for but didn’t enter (the promise land) will be an incredible experience. The inner peace and calmness I felt while in Mecca and Medina is sure to be rekindled when one day I will visit the Holy Land, Insha’Allah.